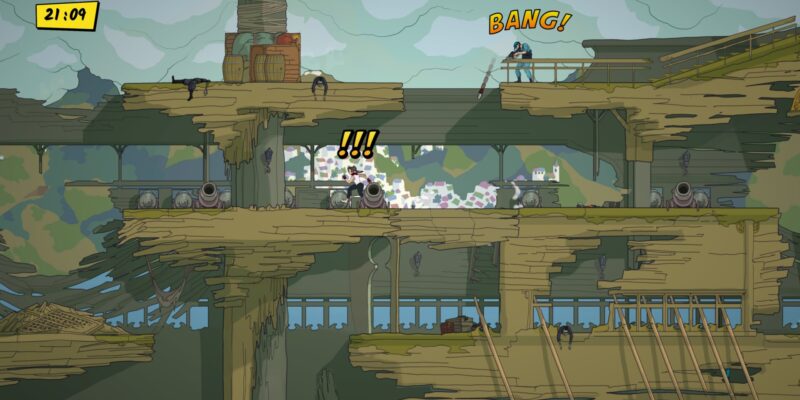 Treasures of the Aegean, the rip-roaring time loop adventure game from developer Undercoders is out today. We got to pose some questions to the studio’s founder and game designer, David Jaumandreu. We spoke of the time-loop mechanic, gameplay design, and influences that apparently don’t completely include Outer Wilds.

The game contains a time-looping narrative very similar to Outer Wilds, and came out long after. Despite the mistaken assumption, we present the interview in full, since it has some great information on what we found to be an excellent game.

PCI: Treasures of the Aegean takes a lot of clear influence from Outer Wilds. What about that game inspired you to utilize similar mechanics? What would you like these choices to convey to players?

Jaumandreu: Actually, when we started designing Treasures of the Aegean around three years and a half ago, Outer Wilds hadn’t been released. We found out about it over half a year into development and were blown away by the incredibly rich world created and the resemblance to the concept of an island trapped in a time loop we were working on. Of course we played and liked it, especially our level designer, Pol Jandula, who was in love with it.

Even if we had started working with the idea of the time-loop before we knew it, we were indeed influenced by Outer Wilds in some aspects. The kind of “diary” kept in the ship, for example, was a big inspiration while designing “the minoan prophecy” in order to keep track of the whole story in a clean, organized way that, at the same time, was well integrated into the game’s lore.

PCI: Similar to the last question, Treasures of the Aegean does an enormous amount to differentiate itself via both progression and pacing. I found many of these to make the game much more clear and playable than Outer Wilds in a lot of ways. What were your specific reasons for making these individual differences so pronounced?

Jaumandreu: When we playtested the first versions of Treasures of the Aegean we found that players enjoyed a lot exploring the island but, at the same time, we also found out that many of them felt kind of lost and without a clear objective. We had to iterate a lot in terms of design, UX and information flow, in order to keep the mysterious approach but, at the same time, give enough information to players so they could proceed.

In this sense, we worked really hard to find a balance between exploration, parkouring, puzzle solving and mystery unveiling. Having a time loop mechanic that didn’t feel repetitive was probably the most tricky part, so we put a lot of effort into finding solutions, such as very fast travelling, random spawn points, tons of secrets to discover and introducing both non-interactive and flashbacks to give players a break from time to time.

PCI: What made you settle on the myth of Minos for your focus?

Jaumandreu: At first the game was conceived based only on the mechanics and the idea of a sinking island trapped in a time loop, so the early prototypes didn’t even have a backstory or narrative. It was during a leisure trip to the Cyclades islands in the Aegean Sea, when we learnt in detail about the Minoan civilization, the Thera eruption and King Minos and found that the theme was just perfect for the game.

Since the Minoan were so advanced for their time, but the eruption virtually wiped out all trace of them, there’s this mysterious charm surrounding their history that has made people imagine all sorts of theories about them. I guess we’re just the latest ones to do so! 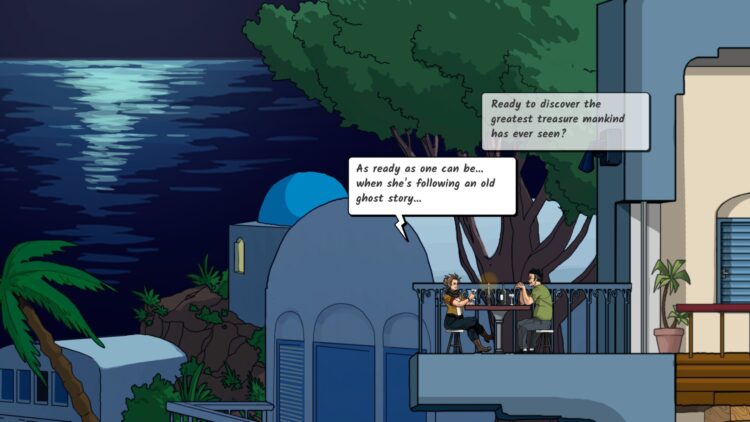 PCI: There’s so much variety to the world that it makes getting around so much more palatable than it could have been. What was your design process like when it came to dividing the island into clearly separate regions in a believable way considering its size?

Jaumandreu: In the first place we brainstormed different areas that would be both attractive and conceptually different from each other, in order to give variety to the island. With the help of our concept artist, we sketched all of them and chose the ones which we thought would, on one hand, look better and, on the other hand, give us more options in terms of level design.

Once we were decided upon the areas, we created a few combinations that would look consistent in a single open world and eventually defined the final shape of the island. We took a lot of real-life references for this process, in order to create a terrain that was both believable and big enough. Verticality was a huge challenge when designing this!

PCI: I especially loved how Marie wakes up in different locations in each loop. That makes things feel far less predictable. Was that more so put in place to incentivize exploration, or was it more to spice things up?

Jaumandreu: The initial idea behind this is that we wanted every playthrough to feel different than the previous one and to keep gameplay fresh during the first handful of loops, avoiding having to replay the same starting section over and over again. The idea of Marie parachuting over an island with little visibility due to the volcano’s ashes was also perfect for this.

When we tested it out, though, we found out that indeed it worked really well also to incentivize exploration!

PCI: Losing minutes off the timer versus having a health bar is such a unique, satisfying approach to the game that massively reduces frustration while also making for a different kind of danger. What was your impetus for going this route?

Jaumandreu: We wanted to incentivize exploration as much as possible in the game, not only in terms of discovery (which is extremely important during the first hours of the game), but also to find the fastest routes between different key areas (in order to complete the game during the later loops). In this sense, having players “die” and restart would have been really a burden, as many times risks have to be taken to find new areas and routes. That’s why we came to the losing minutes solution, which can be tricky and helps keep up the tension when trying to complete the game, but, at the same time, reduces frustration when just trying to enjoy exploring.

We’re really glad you liked this! 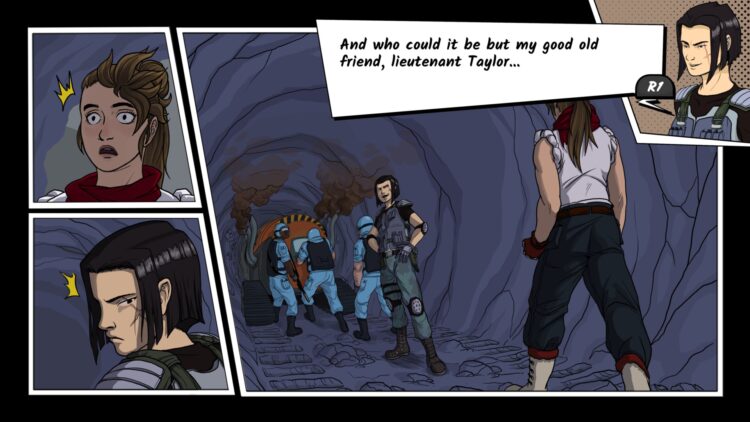 PCI: The movement truly makes me feel like you’ve almost made a hyper-responsive, fluid, and open take on the classic Prince of Persia. What were your main influences in making Marie’s movement feel as great as it does?

Jaumandreu: Some of the team’s members grew up playing the likes of Prince of Persia, Flashback, and Aladdin, so those were clear influences when imagining the swiftness of Marie in terms of animation. In terms of gameplay, though, we focused on more modern era games that played really fluidly and had great player-level interactions. Mirror’s Edge was a big reference for us when defining Marie’s moveset as, even if in 3D, we love how Faith opens her way through the terrain.

PCI: Collecting all the treasures is great fun. How did you settle on which treasures you wanted to include in the game?

Jaumandreu: This actually came quite organically, as the number of treasures wasn’t defined from the start. We knew we wanted to have “treasures in every corner of the island,” so that reaching a particular corner would always have a reward and exploration was still relevant in advanced loops of the game. In order to achieve this, we created “batches” of new treasures every time a new island section was created and, once the island was finished, we completed it while playtesting with users.

PCI: Is there any additional content you’d like to add to the game further down the line, or are you happy with everything as it stands?

Jaumandreu: Since every island location is deeply linked with the backstory or some character, it would be a challenge to add new parts while keeping them relevant to the adventure. But perhaps if there was a second island unknown to historians like James…. 😉 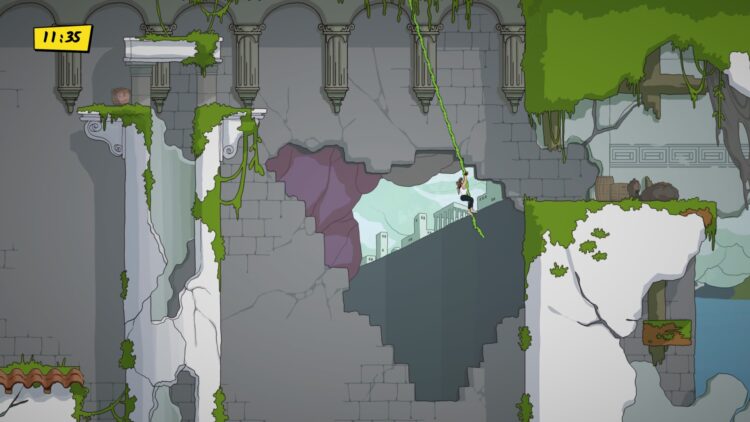 PCI: The puzzles in the game are extremely fair and solvable. What was your process like when it came to ensuring that people would be able to figure things out without help?

Jaumandreu: Puzzle design is one of the aspects that we had to test most among different players and iterate on it, as we often thought that something was “obvious” and found out we couldn’t be more wrong. In this sense, we worked a lot with the idea that the world would have to give players enough clues to be able to solve all the riddles, without needing a guide or clues, and, at the same time, be quick enough to solve so as not to hinder the exploration and parkour rhythm. Since the timer is always ticking and players may find themselves with some pressure, we didn’t want to stress them out!

We’d like to sincerely thank Mr. Jaumandreu for his detailed and fascinating answers to our questions. The game, Treasures of the Aegean is out now on Steam and you can read our review right here!

Note: This interview was edited for accuracy and clarity.

By Andrew Farrell5 days ago
Interviews

Treasures of the Aegean review — Countdown to extinction