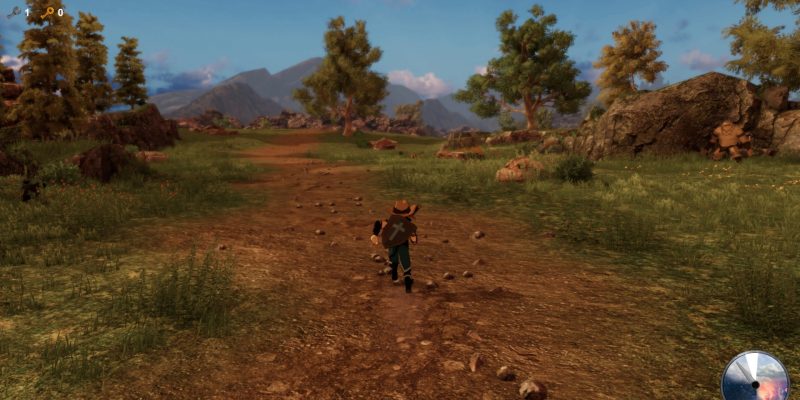 Zelda II was an interesting game. It made a ton of people scratch their heads, but it was interesting. Into the Eternal, a new action RPG with an unfortunately generic title, takes a lot of inspiration from that game. And I mean a lot. More than you might think necessary. The game enters Early Access today and the Steam page promises dozens of hours of content. The dev hopes to have over 100 hours of gameplay when all is said and done. But the question stands: is it worth it?

Into the Eternal begins humorously, with the mayor of a small village explaining that, yes, there’s a powerful monster threatening humanity. But it’s okay, because nothing matters since it’s going to kill everyone. It’s passive-aggressive and fairly funny, leading into the game’s hero, Arus, conversing with a young girl about how he should be the one to defeat the monster. Because he’s got a shield and stuff. “No,” he explains, “I hunt little monsters.” It makes it seem like the game is going to spend its time taking potshots at tropes.

After that, though, it doesn’t seem to do that much. Remember when I said the village was small? Well, it’s not so much a village as it is a single tavern and house. Where did all those people from the opening come from and why do two buildings need a mayor? Anyway, the basic gist is that Arus needs eight gems to defeat the monster. He’ll get these from going into eight temples and defeating bosses. Yeah, I know. That’s fine, though. Familiar gets the job done just as easily. I’d definitely like more snark and digs at tropes, though. And a step to the right

At first blush, Into the Eternal looks like a third person action RPG. But this game is like the second Zelda, you see. When Arus runs into an enemy, the game becomes a side-scroller and he has to fight that way. He’s got a sword and shield, so he slashes, blocks, and jumps. He can also only take about three hits from any enemy early on, so have fun with that.  Sometimes two! When in exploration mode, Arus can also run, which uses up stamina that regenerates very slowly. Unfortunately, you’ll need to get keys to open chests to find upgrades to health, attack, and what I’m assuming to be magic. I didn’t find any health upgrades, so Arus stays mega weak for now. Awesome.

You’ll immediately head to the building that’s farthest from you and get the key for the area’s temple, which is nearby and can’t be missed due to all the ominous fire. Once you head in, yep, it’s like Zelda II again. Temples are side-scrolling only and have elevators you’ll use to switch floors. While Into the Eternal looks good for a 3D indie game, it uses a lot of 2D backgrounds for the temples, which is neat. Your only goal now is to find the golden key, open the way to the boss, and beat him. He’s insanely easy, even though Arus can barely take any damage. If you decide to keep exploring after killing the boss and you end up dying, guess who has to start from the beginning?

After that, you fight an enemy on a bridge before venturing out to the next area. This area is a lot larger, but it’s mostly completely empty. You can fight monsters repeatedly to farm gold, and beating up on enough of them rewards you with coins for completing their bestiary entry. These coins are used to get monster contracts at the hunter’s guild, which can net you special items. And there’s a farm where you can plant seeds to make potions and stuff. But, as best as I can tell, the next temple isn’t in the game yet. Attempting to navigate the only open pathway leads to a “coming soon” sign. You can easily hit this in about 45 minutes. I like some things about Into the Eternal, but the combat is quite poor, as there’s no weight to it whatsoever, and it feels floaty and inaccurate. There’s not much to do yet, the emphasis on finding stat upgrades in chests versus leveling up hurts it, and the game doesn’t recognize the triggers on my PS4 controller, so I had to use DS4 Windows. And then I got stick drift, which makes correctly orienting yourself in side-scrolling sections problematic. I’d say it’s definitely not worth it just yet. But, with time, the game might certainly be worth a look.