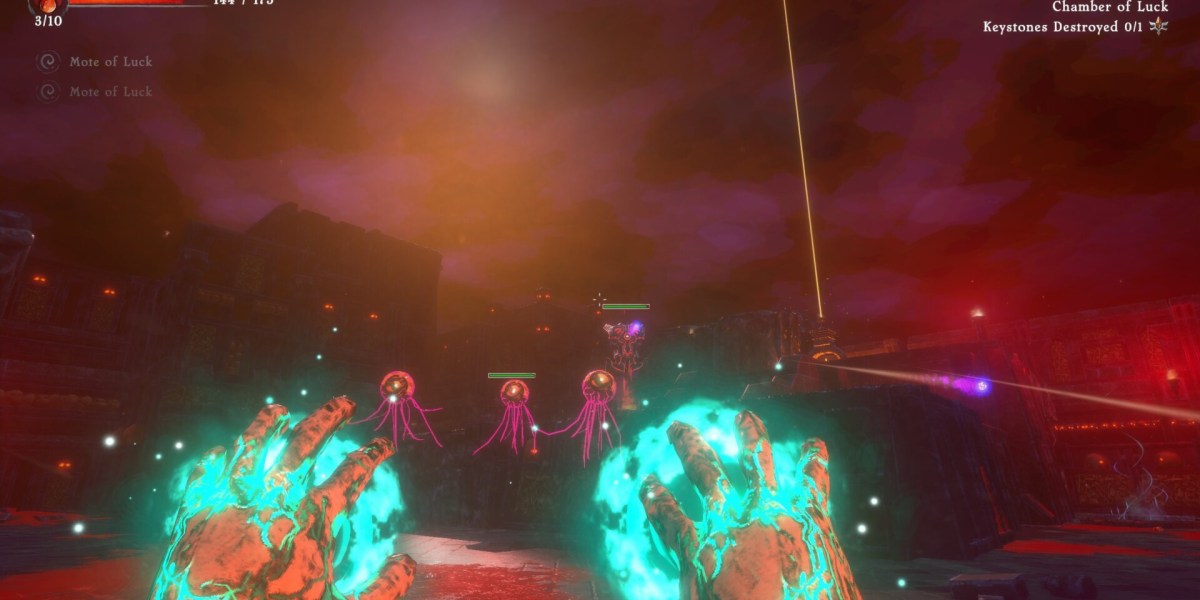 When it comes to rogue-lite FPS games, I’m in rough shape. Honestly, I can never come close to beating them. Into the Pit isn’t necessarily a rogue-lite, but it does take a great many cues from them. Despite this, I only died a single time. It’s got some creative, well-implemented ideas, but it doesn’t take long for the game to completely give up on adding new things into the mix. There’s enjoyment to be had, but this is a deeply repetitive, insanely easy game that stops spicing things up well before its conclusion.

You play as an unnamed mage who has journeyed to a village in search of their cousin, Luridia. The village is mostly empty, as the alderman has imprisoned 45 of the villagers in a demonic pit beneath. There’s very little plot, although Luridia leaves notes behind that clue you into what she’s gone through. Your mission is to go into the dungeons of the pit, rescue villagers, and defeat the alderman once and for all. At the end of each dungeon, the alderman himself taunts you, beckoning you to face him. There are 16 dungeons in Into the Pit, but you only need to complete 11 to beat the game.

The mechanics of Into the Pit are actually impressively complex, at least at first. There are five main dungeon types, each with unique geometry and enemies. There are 15 normal dungeons and one final one, which is where the alderman awaits. To get into each dungeon, you need to place one or two keystones into the altar in front of the pit. Any of the keystones can be placed individually to venture into that specific biome. But, combining any two, save for the final one, will result in dungeons that are a mixture of two biomes. It’s quite clever and I don’t think I’ve seen its like in other games. 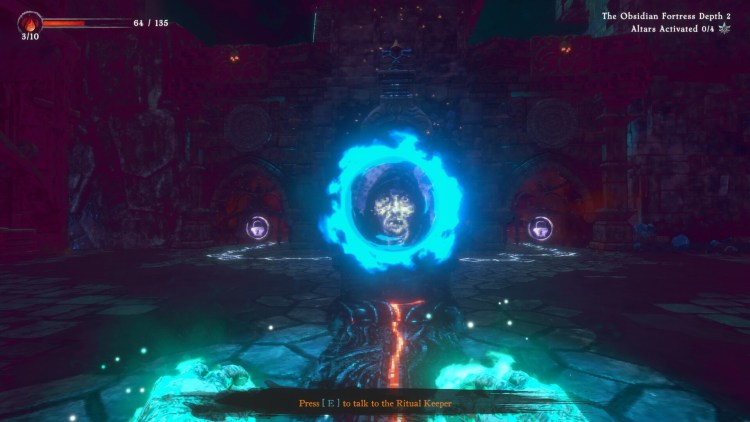 I say there are 16 dungeons, but, truthfully, they all feel the same. If you’ve played an hour of Into the Pit, you’ve basically played it all. Some of the additional enemies are kind of different, but those differences are mostly superficial. For instance, there are multiple varieties of tower enemy that can’t move. They’re stationary and they shoot you. One looks like a statue, one is a worm, and another is a bug. They’re functionally identical, aside from the one whose shots poison you. Similarly, only the appearance of the walls and fauna change between the five main dungeons. Level arrangements are reused for each, and it gets very old.

Each dungeon is broken into five floors. The first four each have four areas to clear. Each area is typically associated with a certain mote. Motes are orbs that help you either inside or outside the dungeon. The inside dungeon motes are green renewal motes that let you reroll your upgrades, blood motes that let you resurrect, and luck motes that increase your chances of better upgrades. On the second and fourth floor of each dungeon, you’ll find an area with a single villager to rescue. Plus, you’ll also find areas with healing circles, and extremely rare areas where you can sacrifice health to power up upgrades.

When you first enter a dungeon, you’ll get to choose an attack spell for each hand, plus your first upgrade. There aren’t a great many attack spells and a lot of them feel interchangeable. It’s a good idea to have a high fire-rate spell and a long-range one though. Upgrades come in a larger variety and can grant you extra damage, the ability to put afflictions on enemies, extra health, damage reductions, and more. 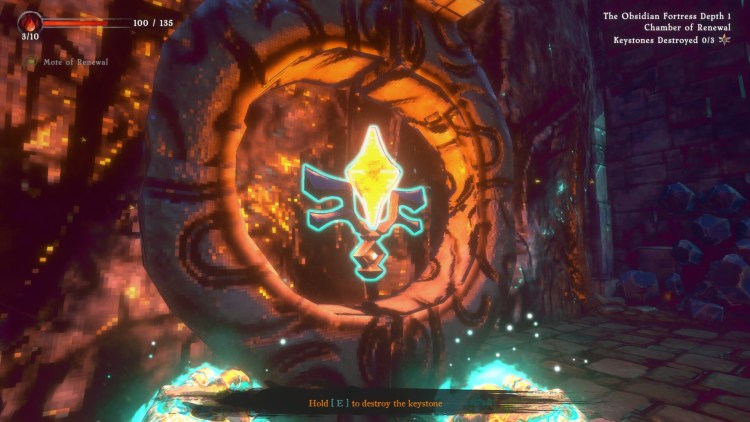 I never stoned a crow

Your goal in each area in Into the Pit is simple. There are a certain number of keystones and you must approach and destroy them all by pressing the E key. There can be as few as one or as many as four. There is no variation. Every single area is you entering a section, clearing out the enemies, and then destroying the nearest keystone. For every area you clear, you get a single additional upgrade. The fifth floor is always a boss floor. There are six different bosses and five of them have the exact same structure.

Once you get the bosses down to half health, they get an impenetrable shield and summon enemies. Once you kill all the enemies, you can drain the other half of their health bar. Every boss is easy, requiring nothing more than simply circle-strafing until they die. Even the last boss is guilty of this, although he has two forms. Into the Pit can be a lot harder if you want it to be, but you can also make it so easy that you’re never in any real danger. As you rescue villagers here, new services are made available in the village.

You can equip six support runes with varying effects. You start with a few default ones and can buy more. You also need to buy five of the six keys. They’re purchased with motes that you don’t lose when you leave the pit. Wealth motes are like money and fire motes allow you to forge keys. Then there are insight motes, which you’ll use to upgrade support runes up to level three. The thing is, some of the support runes are so useful that they’re broken. You can easily use them to heal every time you grab a mote or destroy a keystone. This makes failing pretty difficult. 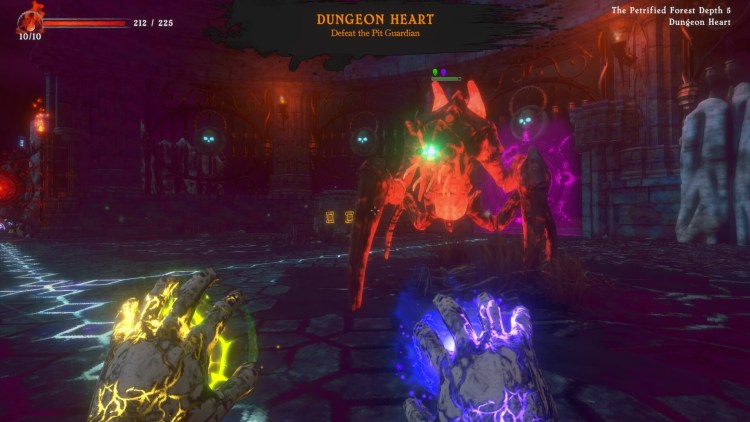 Down to where the vipers spit

It took me about nine hours to beat Into the Pit and I died a single time. For comparison’s sake, genre counterparts Immortal Redneck and Strafe are so hard to me that I can hardly make it past the first few sections. You do get a rune later on that increases enemy damage by 200% in exchange for doubling motes, but, by the time you get it, you’ll almost certainly have more motes than you’ll ever need. There’s hardly anything to spend them on, either. A ton of thought was put into the game’s systems, but there just isn’t enough within to justify them. It’s strange.

Once you rescue 18 of the 45 villagers, you’ve unlocked nearly everything there is to unlock. By that point, you’ll already feel like you’re doing the exact same thing over and over with no variation. You can get the key for the endgame dungeon — which mixes all five biomes together — once you save 30 villagers, but even that dungeon feels just like all the rest. It isn’t even any harder. Once you beat the last boss, you find one last note from your cousin, and then you hit the credits.

Continuing takes you back to before the boss, so you’ll have to die if you want to save the final villagers, but there’s no reason to. The shooting is satisfying, even if your spells are repetitive and limited. Enemies don’t pose much of a threat at all and aren’t thrown at you in intimidating numbers. Into the Pit needed to do something to ramp up its challenge, but instead, it just hits an early peak and then coasts along. It never gets any harder, never adds anything to change up the gameplay. I had an okay time here, but there’s really only enough content to justify a few hours of playtime. 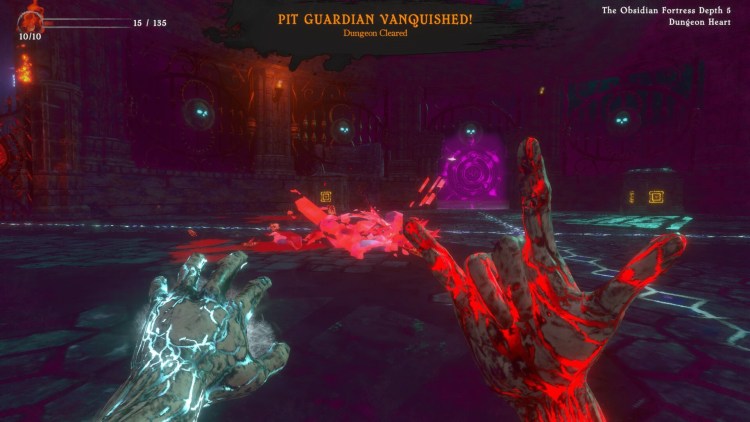 What we’re left with is a shockingly easy game with no variation that squanders some truly impressive ideas. It needed a difficulty curve, more support runes, and bigger variance between dungeons. Instead, it’s happy to regurgitate the same thing ad nauseam. There’s some enjoyment to be found here and there, but Into the Pit should have been more than this.

Although it shows promise early on, Into the Pit runs out of new tricks astoundingly quickly, leading to endless repetition and a total lack of challenge.