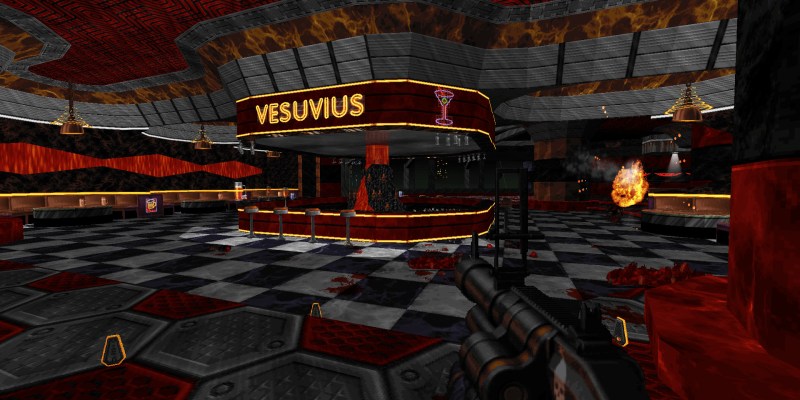 Ion Fury is easily one of my favorite FPS games to come out in recent years. Unlike many similar games, it has a lengthy single-player campaign, so I wasn’t expecting an expansion. Surprisingly, the game will return this year with Aftershock, a new slab of content containing new levels and weapons for players to lob bowling bombs at. The expansion is set to launch on PC and consoles this summer, so it’s still a ways off. If the devs at Voidpoint can reach the high quality bar that they attained with the base game, then I’ll certainly be there on day one.

The Aftershock expansion for Ion Fury picks up after Shelly “Bombshell” Harrison blows Heskel to hell (or so she thought) in the base game. She stops off at a bar and, wouldn’t you know it, things start exploding. Why does this sound so familiar? She rushes outside, only to find a mushroom cloud in the distance with Heskel laughing maniacally from a flying contraption. Realizing that she has no time to waste, she jumps on a hoverbike and goes after him. One of the selling points of the expansion is that it will actually allow players to drive the hoverbike in-game. It even has plasma homing missiles. Where would you even get one of those inspected?

The trailer shows the hoverbike in action, along with some brief looks at the new levels. Ion Fury: Aftershock will include all-new weapons too, although the trailer doesn’t give us a look at any of those. Owning the expansion will also give players an arrange mode for the original campaign, which changes things up by adding the expansion’s weapons and enemies in. I’m stoked for this and will take any excuse to get back into the game. As long as I don’t have to deal with too many of those teleporting blue fire enemies. I hate those things.

Where to find literature samples in Fortnite Season 6, Week 2