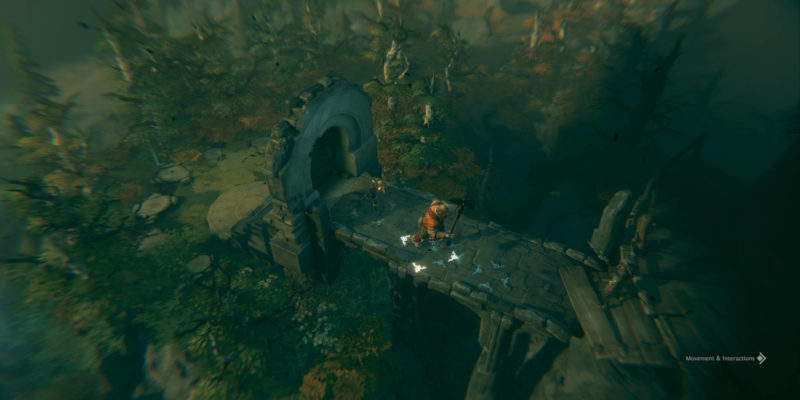 Neither books nor movies can generally deal with time travel with any grace — there’s always a plot hole waiting right around the corner. Games have a somewhat better track record, at least those than only use time travel via a rewind button, a la Prince of Persia. But when it comes to tactical applications of time manipulation, Iron Danger is playing in the big leagues.

Our story takes place in a fantasy land… that is clearly just magical Finland. The capital is named Kalevala, ferchristssake. It’s under attack by the smoke-belching thrall-armies of northlander cyborgs. One such group destroyed protagonist Kipuna’s town. Too bad for them, as this leads to her possessing a shard which grants her the ability to rewind time. To end the threat of Queen Lowhee’s slave armies, she must assemble the shards and reactivate the mysterious ancient Auralith. The fact that each one just gives her more powers to play with is a nice bonus. 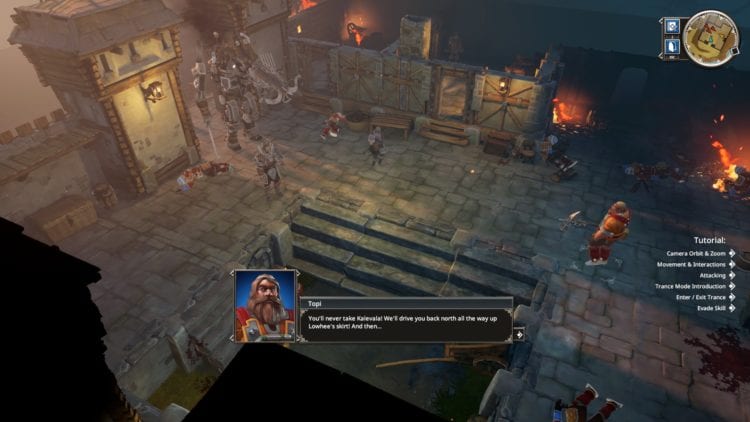 Iron Danger is an isometric, real-time action-RPG where you control two characters at most. The kicker is that you can rewind time whenever you want. After all, each action has its length in beats (half-second intervals) and those are recorded on a timeline. In exploration, one character follows the other and you carry everything out in real time. However, once you receive damage or when combat starts, you set actions for the characters individually — you can also manually enter time trance to launch an ambush. You use that knowledge and limitless rewinds (in the sense that you can do it as often as you want) to win fights you would definitely lose without this power.

Outside of certain spells and abilities, everything in Iron Danger interacts with the world in a very physical way. Arrows remain stuck in the air when you stop time. Every swing of sword will connect with anything in its path, targeting and friendly fire be damned. There’s not much in the way passive defenses, only your HP pool and the actions you take. Naturally, this leads to a very deadly world in real time — but you play against the rules. 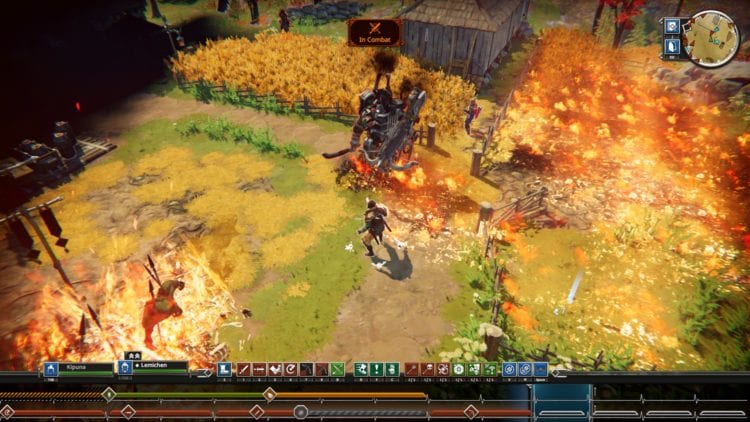 You also set a lot of stuff on fire.

In essence, Iron Danger’s time manipulation feels like rapid savescumming made into a game mechanic. It’s not often that you can direct the way the fight is going in half-second increments. But you can in this game, and you have the motivation to do so. At first, it’s because Kipuna and her companions are quite weedy and the enemies numerous. In fact, you have to un-learn that later on, when healing becomes more plentiful. You’ll have to fight the desire to rewind every time, even if the damage isn’t lethal and it didn’t interrupt an action (which it can do).

But once you get the hang of the system, the carnage is glorious. You’ll be setting up environmental hazards (the world of Iron Danger is rich in explosive barrels) on the fly, ready to go off as soon as that grenade lands in the next beat. You’ll be pushing enemies into the path of their compatriots’ attacks. And you’ll be rerunning the same one second strip countless times to make it work just right. But you know what? It feels worth it.

Iron Danger: a game about anemia

Unfortunately, there’s no way to replay the fight after it’s over, to see the real, final timeline. However, after you end the mission, Iron Danger will tell you how much time you took — and how much time passed in the world. It also notes how many times each of your characters died. Sure, it doesn’t have any mechanical effects, but it’s fun to know. 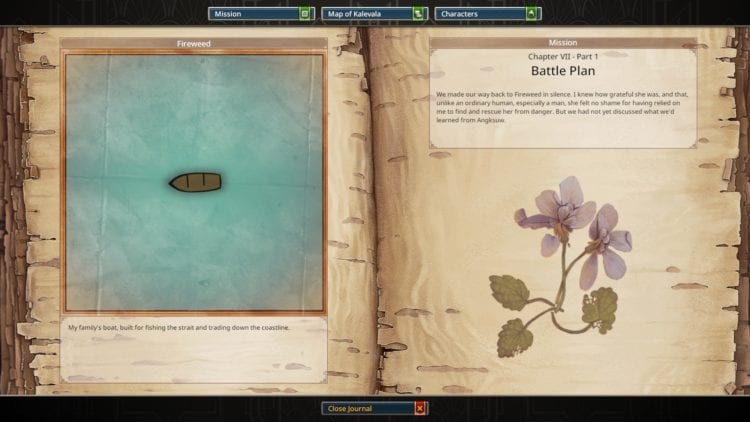 Speaking of missions, every interactive bit of the game is split off into its own map, with intro screen and debriefing in the end. Be it a delve into an ancient temple that’s as much of a puzzle as a combat encounter, a narrative important romp in the town without any battles, or just an interlude of Kipuna talking to her companions on the ship, everything is presented that way.

Inside the mission, you have free reign to go anywhere on the map that’s not locked by some puzzle you need to solve. That means that you can do proper looting, as well as shaping the battlefield to turn the fight to your favor before it even begins. There’s an element of stealth in Iron Danger as well — it pays to explore and maybe pick off a few stragglers before wading into the fight.

Getting good at this “killing” thing

After some missions you’ll be given the chance to upgrade abilities, either Kipuna’s or her companions’. It’s only ever a single upgrade, so choose them wisely. Naturally, Iron Danger understands the importance of such sparse upgrades — hence they’re quite meaningful. For example, upgrading the bark skin spell to stone skin takes it from a damage resistance buff that leaves you vulnerable to fire to actual invulnerability. Great for tanking those pesky instakill turret arrows!

Kipuna is as weedy as you’d expect the teenaged daughter of a fisherman to be, but she has the most tools in her ever-expanding roster of powers. The more shards she collects, the more spells she has — and you select which ones get upgraded. Fire will be the first thing on Kipuna’s repertoire and probably the most useful one. Remember: northlanders always have fuel cans and oil barrels around. There’s a lot you can do with fire and fireballs! Just be careful casting those spells when you’re hiding in tall vegetation or standing on a patch of oil. 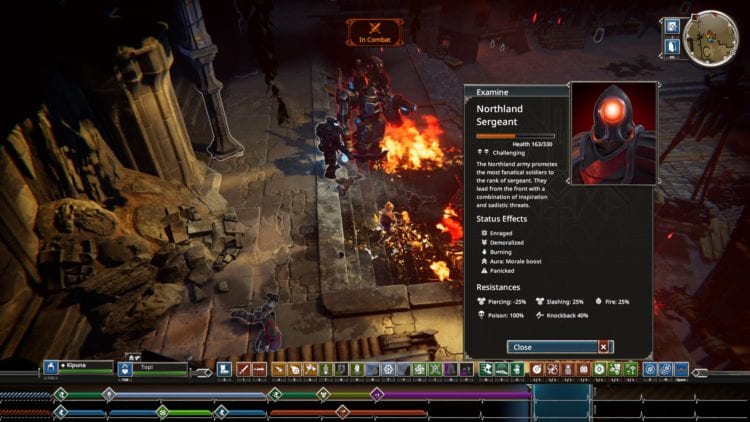 The northland sergeant is having just the worst day.

Kipuna’s companions are a lot more limited. They each serve a certain stereotype: the fighter, the rogue, the… cleric? But as they have fewer powers, there are fewer things to do with them. And sometimes, you’re just stuck on cooldowns or don’t have any useful abilities, which is less than ideal. One thing to note: do not use explosive arrows with a character that has the fire-weapon spell on. It leads to bad (explosive) outcomes.

Iron Danger is centered, of course, on Kipuna, and we’re playing her. She’s maybe less heroic than I would have liked, but I guess that humanizes her. After all, she doesn’t know she’s a game protagonist and hero. Kipuna acts very naturally when she’s not gung-ho about this war thing. The game notes that she sees every time her companions die — and feels it every time she does so as well (that’s when the “trance” kicks in and time is rewound). Gotta love the way this ties narrative to gameplay.

Her companions are not the most colorful lot — the healer and the epithets she showers Kipuna with aside — but they’re fun characters on their own. You’ll go through Iron Danger with this expanding cast of combat helpers, but without interacting with many other characters. Your opponents will be mostly northlanders and their steampunkish army. They’ll provide most of your antagonists as well, though none of them are given enough screen time for you to start really caring why you’re fighting them. 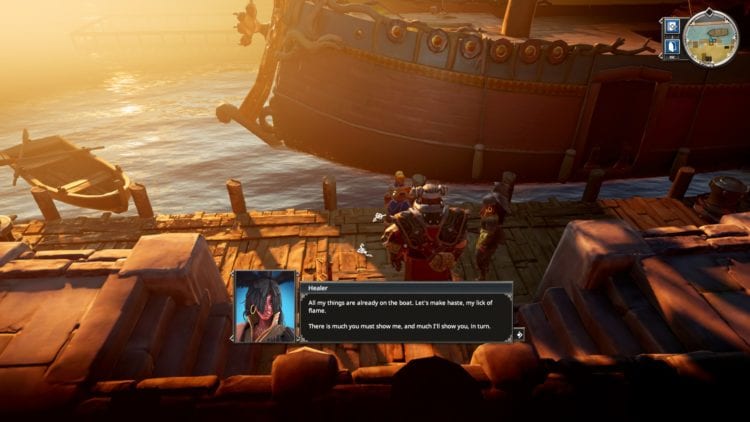 Those are not appropriate things to say a teenager, Healer!

The difference between the northerners and the locals is striking. Kipuna and her allies are more typical fantasy people dressed in medieval-ish garb. The northerners are all clad in metal, with monocular helmets and cyborg monstrosities. All in all, Iron Danger has a strong visual style and there’s plenty of effort in both 2D and 3D art. Kipuna herself goes through half-dozen text box portraits.

And the sound! Oh the sounds! Every dialogue worth a text box is voiced, and I feel like the voice acting makes the characters distinctive enough. Sure, some of it is in the writing — here’s the healer and her epithets again — but over all, Iron Danger does audio well. This includes the crowing of the roosterfish. No, I will not explain that further.

Iron Danger is a fun game that takes us to fantasy Finland and lets us play with time. This is a surprisingly good combination before you take interactive environments and the vibrant art style into account. If you want to play a fantasy RPG that’s lighter on the RP and heavier on G(ameplay), try this one out.

Iron Danger is as charming as it's filled with environmental traps and time crimes. Also, you heal when you enter a sauna.

By Michael Feghali10 hours ago
Reviews