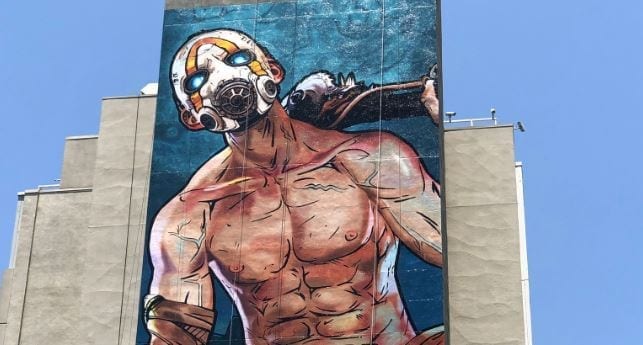 Borderlands 3 is arguably one of the most anticipated games of E3 2019 if not the year itself. It’s the first time that a wholehearted sequel has been produced in seven years. In the past few months, we’ve seen efforts to showcase the game via live stream and even have people preview the game during a hands-on event. Many were also moved to see that a fan who is terminally ill might also have the chance to play the game on behalf of Gearbox. And now, we have a giant wall mural in downtown Los Angeles that makes the Borderlands 3 logo look like a giant dick.

It’s tough to say whether or not the image is in fact done purposely to resemble male genitalia. There has already been a lot of concern surrounding Randy Pitchford, the CEO of Gearbox Software (the company responsible for developing the Borderlands franchise), and his alleged actions towards previous employees. While this might not have any ties to him whatsoever, he does most likely have the final say on projects or depictions such as these.

Have a few laughs, I guess

If you’re looking for something to get you through the rest of the week, or are searching for a good laugh, you can browse through the growing responses to the image Tweeted from Gearbox’s official Twitter page (see below). Browsing through my own Twitter feed was exactly how I stumbled upon the alleged image. And of course, the comments point that out almost immediately.

Borderlands 3 is expected to release on September 13, 2019. It will launch on the PC, PlayStation 4, and Xbox One. There is surely more to be discovered about the game as we head into the biggest video game convention of the year, the Electronic Entertainment Expo (E3). Click here to view all our coverage thus far surrounding the game.