VR has very recently become a buzz word but have we not been here before? Back in the nineties the promise of immersing yourself in a magnificent world that up until then could only be experienced in its flat 2-dimensional format  was incredibly appealing.  No wonder people sat up and took notice of the next big thing to hit the press. Virtual Reality technology had arrived.

Who can forget movies such as TRON, Lawnmower Man or even the Star Trek Holodeck? Virtual worlds were hot news and the public were excited at the prospect of the fantasy being within their grasp for the first time. 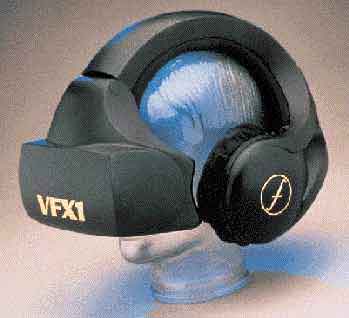 I have had quite an interest in the concept of VR, in fact it was how I got started in this videogame industry in 1995. My grand plan was to set up a videogame cafe for LAN gamers and get the general public enthused about the concept of multiplayer gaming as a form of entertainment. Trying to sell the idea to the average Joe, most who had never heard of games such as Doom, was always going to be a hard sell.

Enter  the lure of virtual reality. I scraped together funds to import the best commercially available VR headsets at the time, Forte’s sleek looking VFX-1. This VR gear looked the part, it was futuristic and I knew it would make people sit up and take notice of the new business venture. The idea worked, the cafe was opened and even the press were getting excited, not so much with the idea of LAN gaming, but the fact they could stick on some futuristic headgear and wander around a virtual world.

Back then the VFX-1 was the best piece of kit on the market and the fact that it supported games like Quake, Doom, Descent, MechWarrior and even flight sim EF2000 was pretty amazing. Sure, the resolution was not great and the game visuals were nowhere near today’s standards, but it did feature head tracking and even had a very cool motion tracking hand-held puck. The VFX-1 was a great piece of kit for around a rather expensive $1000 mark at the time.

Having kitted out four booths where players could stand and rotate a full 360 degrees with the headset on, it all worked rather well but something happened that we never expected, something that has been mentioned but skirted over a great deal in recent articles about VR. Motion sickness.

Now you may think only big girls’ blouses get motion sickness but I can assure you that it’s very real and rather unpleasant. Through the five years we ran the headsets hundreds of gamers tried the kit in games such as Doom and MechWarrior. Rather worryingly around 85% would suffer from the sickness. Symptoms included severe nausea, giddiness, collapsing and even vomiting. Thankfully most made it out to the pavement before they chucked up.

I remember one afternoon a few lads came in to try out some deathmatch on Doom and within a matter of minutes we had two customers throwing their guts up outside the cafe. After a nice sit down for ten minutes or so they were starting to feel a little better but there wasn’t much colour left in their faces.

Having used the headsets myself hundreds of times over the years I would still suffer after any period longer than 15 minutes. In fact, we had to set a limit of no more than ten minutes per session, any longer and we would risk an accident with a customer. 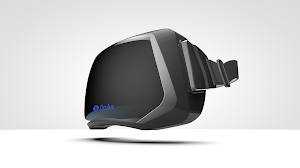 So here we are in 2013, things have gone full circle once again and the Oculus Rift is the VR toy of the moment. I was interested to read feedback from a recent press event by the guys over at PCGamesN  who commented:

“Valve’s early tests involved just nine people, and seven of them wanted to stop after just 20 minutes of play. One thing that Valve have found that helps is a process of progressive acclimation. Starting a new group of players on a week-long regime of increasingly long play sessions got most of them over the worst reactions, but Ludwig is still concerned that it’s going to be an obstacle.”

With such a small testing group, you can see that VR will cause nausea, even with today’s improved resolutions and displays. Oculus are right to be concerned, very concerned in fact.

Based on my experience and the massive testing pool we had over the five years of running the VFX-1, Oculus users could be in for a sickly surprise. As to resolving the problem by gradually increasing use, I would say that’s very optimistic.

I’ve not tried the Oculus, and it does feature vast improvements over the VFX-1, but the fact that motion sickness has been highlighted as a potential problem should be of concern for anyone wanting to jump on the VR bandwagon.

I will go as far to say that VR is not the way forward for gamers, the novelty is fun but it‘s just that, a novelty. You will never be able to compete against others using a standard monitor, it’s just too disorientating.

While the Oculus has not gone as far as the VFX-1 (this does surprise me), which had a motion tracking puck device, it means you are still bound to the mouse and keyboard so there isn’t quite as much immersion as there was with the old VFX-1.

My four VFX-1 headsets are now in my collection of gaming paraphernalia and should be recognised as a great experiment in gaming that never really caught on. Oculus has said that a VR kit would cost you “tens of thousands” in the nineties but this wasn’t the case, for around $1000 you could have had a pretty tasty VR headset. The VFX-1 and many other competitive products all had a good stab at VR, and while the resolution on the Oculus is superior to what was available at a similar price back then,  it could suffer exactly the same fate as its older cousins. Is it going to change the face of gaming any time soon? I don’t believe so.

I contacted Oculus to comment on the motion sickness problem with the Oculus Rift but up to the time of publishing this they remain silent on the matter.