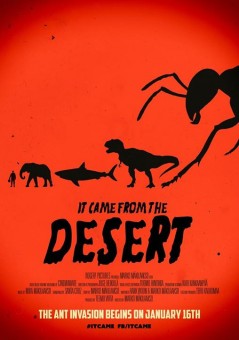 I have checked about six times, but no, it’s not April 1st: It Came From the Desert is being made into a film.

Yup. Cinemaware’s 1989 action-adventure-RPG thing, which featured a sleepy desert town coming under attack by an army of mutant ants, is being turned into a movie. It’s being made by Roger! Pictures, who I’ve never heard of before, but from the looks of things they’re a new Finnish company currently working on a few action/horror/comedy films. Until I hear otherwise I’m going to assume this is going to be a digital thing rather than a MAJOR CINEMA RELEASE, but you never know.

Also: to any of you thinking “Wasn’t there an It Came From the Desert movie in the 50s, called Them!” – yes, I had the same thought.

We will apparently be hearing more about it on 16 January 2015, but so far, we can apparently confirm that Troma’s Lloyd Kaufman will be making a cameo appearance in the film. Which… okay, yeah, if you’re referencing Troma then you’re probably heading in the right direction for something like this.

Cinemaware themselves are currently beavering away on Rocket Ranger Reloaded, the Kickstarter for which ends in about 36 hours. It’s at 92% of its funding goal, so if you want to chip in on that, you can still do so here.