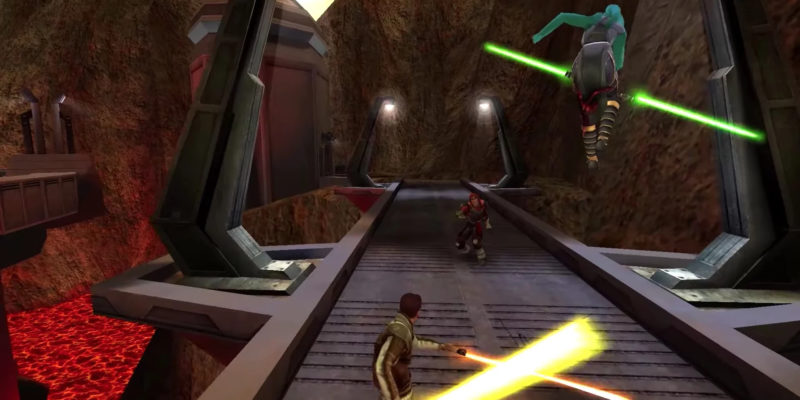 Ready for some news about a seventeen-year-old game? Jedi Knight: Jedi Academy launched last week on PlayStation 4 and Switch, and it accidentally features online crossplay with PC. As a result of a less-than-secure matchmaking system, new console players are battling against PC players. The result is an Order 66-level bloodbath.

The console port of Jedi Academy is very faithful – hence the problem. The controls remain designed with a keyboard and mouse in mind, and it shows. Controller players struggle to aim with an analog stick, and they must constantly cycle through options to use their Force powers. These are standard problems when porting PC games to console.

What’s less standard is Jedi Academy‘s accidental crossplay. Because everything got ported across to console, players can even see the IP address for console-only servers. This is an invaluable tool for PC players, allowing them to easily join in friends’ matches by copying across IP addresses. Unfortunately, it also means that PC players can access servers that are supposed to be console-only. PC players can’t accidentally wander into console matches. Instead, they must make the conscious decision to sneak in. There are innocent reasons for doing so (such as playing with friends), but for the most part, this is leading to abuse. One Resetera user reported being decimated by a player with a Twitch handle. This led them to discover that this sneaky PC gamer was streaming their conquest over brand new console players.

While crossplay is lovely, developers tend to shield console gamers from PC players when it comes to FPS titles like Jedi Academy. As such, gamers have flooded publisher Aspyr Media with requests for a patch. The company has remained silent thus far, though.

I think we’d all rather you patch out the IP address being displayed, change the IPs, and do all you can from PC players from entering the servers. Please look into it. It’s ruining the experience for the new console players.

It’s a shame that some PC players are taking the quick and easy path, succumbing to the temptation of the Dark Side. This is by no means a reflection on the entire Jedi Academy PC community. But you only need a few such renegades to ruin what could otherwise be a nice opportunity for crossplay.

That said, while it may be a blatant Sith move, there’s no denying: it’s also pretty funny.