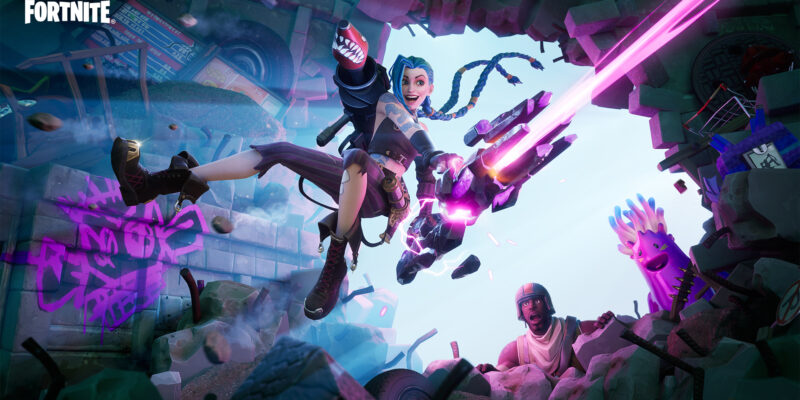 Everyone’s going crazy, including Jinx from League of Legends, as she’s joining Fortnite ahead of her Arcane debut. The loose cannon and criminal from Zaun will be available in the battle royale’s Item Shop with a new set of gear, presumably from the game and Arcane. Jinx is one of League of Legends‘ poster-kids, and Riot Games is really going all out in making sure Arcane is a successful project.

The massive amount of marketing with the Arcane characters — Jinx, Vi, and Jayce — is pretty impressive. I never really thought I’d see the day when League of Legends and Fortnite had a crossover, but it’s hard to object to such a fun combination of one of PC’s biggest free-to-play games.

Going wild with Jinx from League of Legends

My first nickname for Jinx was Harley Quinn, and she certainly looks like a blend of insane and violent. Of course, it’s not just the Jinx skin that players can get. Fortnite fans can also acquire Jinx’s “Dream Monkey back bling,” and the “Pow Pow Crusher Pickaxe.” You can also get some instrumental lobby music that comes straight from Arcane‘s soundtrack. The Arcane Jinx bundle will also come with a “Jinxed Spray,” a “Wreaking Havoc Loading Screen,” and a “Katchoo Loading Screen.”

Epic Games released a trailer showing off a bit of Jinx’s skin, and it’s the kind of manic energy we expect from Zaun’s most notorious criminal. She comes blasting in on a set of rockets, while joyfully strumming the guitar or skipping through a scene of explosions without a care in the world. At the very least, they got the energy right with this crossover. You can check out Jinx in action in a brief trailer below. The League of Legends Jinx skin will be available in Fortnite on November 4 at 7 PM ET.