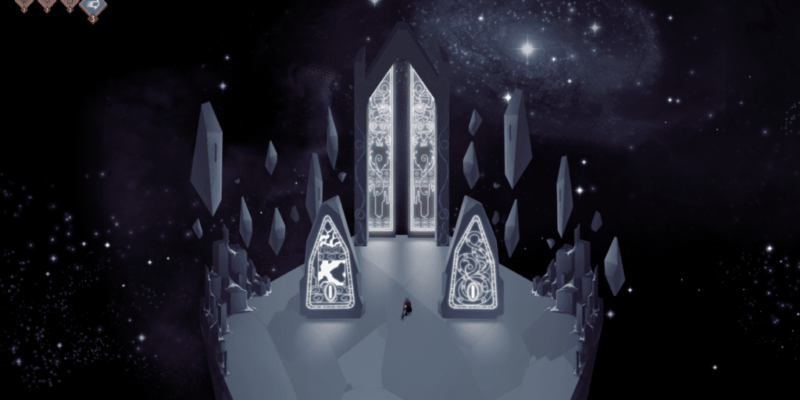 Jotun (or possibly Jøtun, since that’s what the title card says) is a game which joins The Banner Saga and, for readers who recall the magical 16-bit age, Heimdall in embracing the setting of Norse mythology. Viking tales are full of daring adventure, heroic fights, and one of Loki’s children being an eight-legged horse, so more people should obviously be turning them into videogames.

Currently running a closed beta on Steam after a successful Kickstarter campaign in August 2014, Jotun pops you in the leather boots of Thora, a warrior who must prove herself worthy of entering Valhalla by impressing the gods. To that end, you need to seek out oversized bosses (the titular Jotun) and hit them with your double-handed axe. That’s how you get divine attention in Viking purgatory. 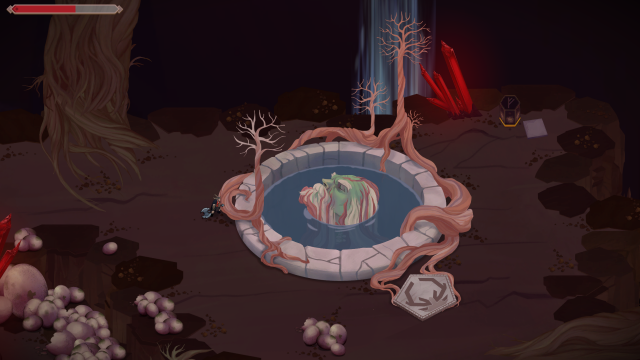 Mimir takes time out from whispering to Odin to regenerate your health and abilities.

The current closed beta build has four levels, ranging in Norse topicality from Jörmungandr’s frozen lake to the twisting roots of the great tree Yggdrasil. Thora starts in a hub-like world and (for now at least) is free to enter any of the four areas in whichever order the player fancies. Each zone contains a rune, a pair of which will open up the corresponding boss fight for each ‘world’ off the main hub.

Guidance towards your goal on each level is fairly light. You get a map (both from the pause menu screen and sketched on the ground in the hub world,) but although this shows you roughly where the rune and other points of interest are located, it doesn’t show Thora’s actual position.

Several of the Jotun beta levels also have a puzzle-ish theme, which credit the player with figuring them out. In Niflheim’s nine rivers area, for example, periodic blizzards will inflict an awful lot of damage. Until, that is, you take the visual clue from large slabs of rock with snow piled up against one side and use them as cover. There’s no button prompt. No patronising “Maybe you should try taking cover here!” messages. Just a straightforward puzzle with a gently (and non-verbally) signposted solution.

Jotun takes the same approach with its secrets and god shrines – towering monuments to the Viking deities which bestow Thora with useful abilities, like a decoy or a temporary shield – making the player do a little work to figure out how to reach things. 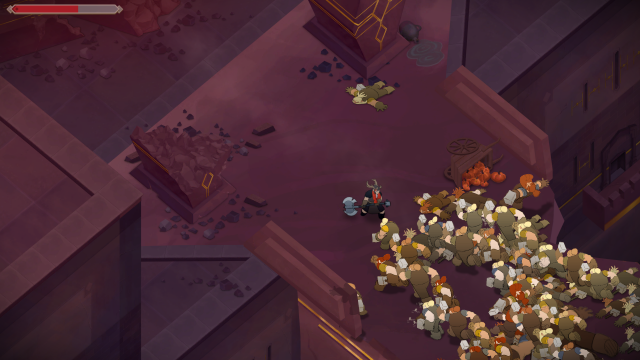 Sometimes the puzzle is just “beat up lots of dwarfs.”

With exploration and retracing steps often a part of each area (you can warp back to the hub area at will, and any level progress will be saved,) it would perhaps be helpful if Thora could move a bit faster. The desire to comb large, often quite barren, areas for the last hidden column to bash with your axe is tempered slightly by the knowledge that this could take quite a while. She almost shifts along at a respectable rate (and the limited-use speed boost power can help a bit,) but at the moment it’s one of those games where you find yourself dodge-rolling around the place because it seems ever so slightly quicker.

That lethargy of step is always there, but only really becomes a problem when you’re revisiting an area and trawling around it for hidden extras or a new power. I found the first time through each space to be slower paced by choice, figuring out how various things work and gazing at the Viking backdrops. Jotun has a directorial approach to camera control, pushing it in tight for claustrophobic corridors and pulling it back (way, way back) for shoreline vistas, turning Thora into a miniature, isolated figure alongside staple-mark footprints.

The lack of player control over the camera zoom felt a little limiting at first (and can still result in you losing your character a bit when it’s pulled really far back during crowded fights,) but the effect grew on me. Particularly once I’d reached a certain hidden-ish area and the camera revealed that Thora was overlooking the chamber belonging to that realm’s boss. 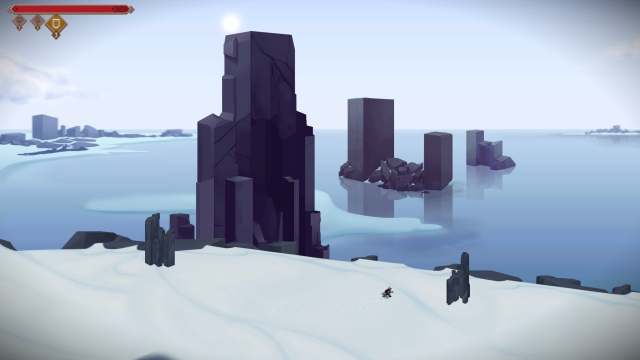 I can almost see my ingloriously slain mortal body from up here.

Combat is used somewhat sparingly in the beta levels. Only one of the three (Brokkr’s Forge) throws cart-loads of dwarven enemies Thora’s way, and that’s arguably as a warm-up for the related boss battle. There are no interrupts to her hand-drawn attack animations, so once you start the lengthy wind-up of the heavy attack, you’re committed to it (though can pivot in place.) Likewise, the dodge-roll has a slight pause at the end of it, preventing you from spam-dodging everywhere.

Consequently, boss fights are fairly methodical duals. Two particularly neat things about the pair of bosses found in this build: they have the same hand-drawn animation style as Thora, but with reduced frames, giving them a lumbering, jerky feel befitting of their behemoth-like stature. Second, you can fight them with no additional god powers if you feel up to it. Or by accident, if you’re me and blunder into a boss chamber before you’ve learned that collectible god powers are even an option.

Doing that was actually pretty terrific though. It taught me that bosses can probably be taken down with just the basic combat moves (I didn’t actually manage this, but was getting fairly close,) and prompted me to start investigating the other level zones a bit more thoroughly. Another example of Jotun’s hands-off guidance.

Well, this seems like it’ll be a fair fight.

The boss fights are sensibly designed around Thora’s relatively limited attack set and uninterruptable animations. They have a handful of attacks with lengthy and distinct wind-ups (Fe, for example, will ready her shield like a frisbee before tossing it at you,) and escalate their actions as they take more damage. Shadow is used to denote dangerous areas, like when the Niflheim boss is going to try to flop over on you.

There are perhaps some minor issues with hitboxes and figuring out, visually, where it’s perfectly safe to stand, but nothing that can’t be cleaned up before release. Similarly, the subtle shadowing can make it a little hard to determine depth in levels where there are upper walkways and platforms.

Overall though, Jotun’s early moments are very encouraging. It has a welcome lightness of touch to its guidance, and lets the player learn by exploring and discovering things for themselves. That means there’s a freedom to make mistakes (like tackling a boss a bit too early,) but enough leeway to mitigate them (I’m still convinced Fe can be beaten without additional powers.) There’s a variety to the level design which I can only hope will extend beyond the limited areas on show in the beta, and the art style is, self-evidently, rather terrific. No sign of Loki’s eight-legged horse child just yet, but there’s still time for that.

Party Hard – The Game For People Who Dislike Partying Hard