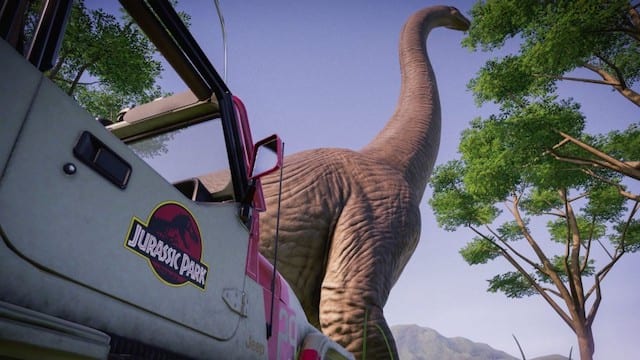 While the new Jurassic World films set a great tone for dinosaur madness, there are those that appreciate the original that started it all. Jurassic Park is still a nostalgic experience 26 years later, and the developers at Frontier recognize this. As such, it’ll add a new DLC pack to its hit sim Jurassic World Evolution that will take fans back to that place: Return to Jurassic Park.


During X019 today, the developer introduced the expansion that will arrive for PC next month. It will feature seven new story missions that revolve around the classic film and its iconic Isla Nublar location.

On top of that, there will be more voice talent channeling the original film. Along with the returning Jeff Goldblum, Jurassic World Evolution: Return to Jurassic Park will feature voicework by Laura Dern and Sam Neill. Players may remember their characters Dr. Ellie Sattler and Alan Grant from the film. (And of course, Goldblum’s Dr. Ian Malcolm, because obviously.)

There are some familiar locations in the expansion, including the Main Gates that open up to the park. There’s also the Tour, which introduces a variety of Isla Nubar stops — including the T.Rex paddock. The park will be home to new creatures, including the Pteranodon and the Compsognathus. The full list of features should be available on the Frontier forums soon.

Jurassic World Evolution: Return to Jurassic Park is set to debut on December 10. It’s priced at $19.99, which should be worth it for nostalgic fans. There will be a free content update releasing at the same time, complete with changes to ranger interactions with dinosaurs and more. There will also be general fixes and tweaks applied with it as well.

Check out the trailer below and enjoy the old-school goodness. And remember, ahhhh ahhhhh ahhhhh, you didn’t say the magic word!