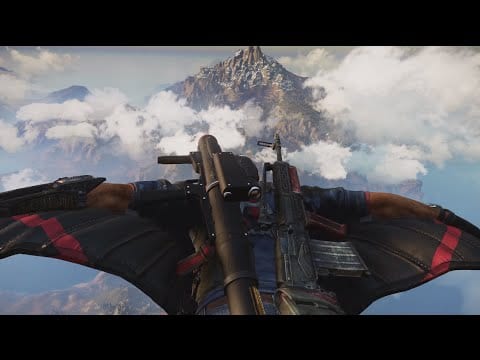 After some scintillating corporate philosophy chat, the Square Enix conference got on with tying multiple helicopters together with grappling lines in Just Cause 3.

Avalanche announced that the game will be released on 1 December this year, and then showed the “here’s what Just Cause 3 is all about” gameplay trailer below.

As those who played the second game will probably have guessed, what the third one is mostly about is blowing things up. Multiple grappling lines (one of the most popular mods from Just Cause 2) comes as standard in this release, and Rico’s parachute is said to be more “stable” now – meaning a steadier aim.

This time around, our versatile mercenary is returning to the Mediterranean island of his mother’s birth to overthrow yet another pesky dictator with a fetish for putting up massive military bases everywhere. Happily, Rico has the precise set of tools necessary for sling-shotting cars into expensive military equipment, or pulling down flimsy structures.

The Just Cause 3 video also goes a little bit into the side missions and activities players can get up to, in order to unlock more destructive tools for Rico to use.

Hitman levels to be “living sandboxes,” PC beta one week after PS4