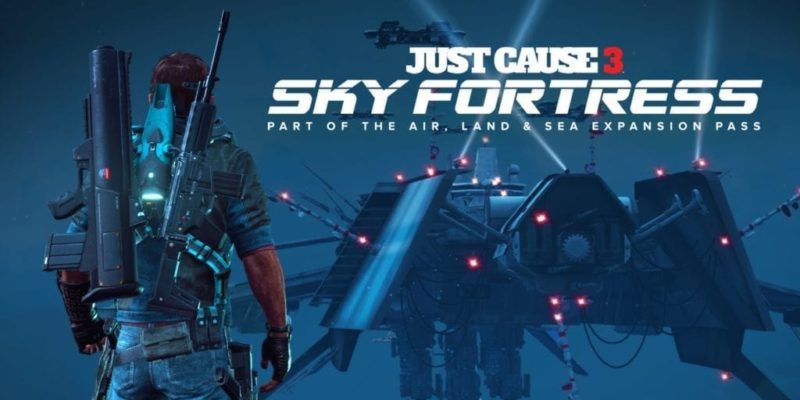 The first piece of DLC for Just Cause 3 was announced today by Avalanche Studios, the developer of the third installment in the open world series. This is the first of a three part DLC strand from Avalanche that is set to conclude in the Summer of this year.

The first expansion is titled “Sky Fortress” and you can check out the trailer below.

“Sky Fortress” will have our protagonist, Rico Rodriguez facing off against an army of deadly robots and the still mysterious Sky Fortress. In true Just Cause fashion, you’ll also have access to the new ‘Bavarium Wingsuit’ which is, of course, fitted with machine guns on the shoulders and auto-targeting missiles.

Tobias Anderson, Senior Producer at Avalanche Studios, had this to say on “Sky Fortress”:

An incredible amount of time has been spent ensuring every new item is fully integrated into the main game and can be used during existing missions. Rico’s new Bavarium Wingsuit will fundamentally alter the core gameplay of Just Cause 3 and we can’t wait to see the crazy stunts that players perform with it.

The second expansion will be “Land Mech Assault” which will feature brand-new missions and a heavily armored mech to take into battle with you.

The third, and final, expansion will be the “Bavarium Sea Heist”. No details have been revealed yet, but we have high hopes for this one in particular.

Each of these expansions will be available one week early for holders of the Air, Land, and Sea expansion pass which costs $24.99. For those scared of commitment, the first DLC, “Sky Fortress” is due out next month with a $11.99 price tag. No release date or pricing have been released on the final two pieces of DLC.

By Andrew Farrell47 mins ago
News