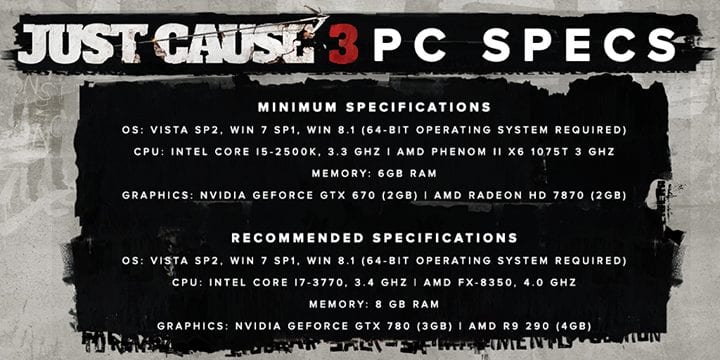 Rico Rodriguez has a lot of things he needs to explode in the upcoming Just Cause 3, some of which may take a toll on your PC if it’s at the lower end of the hardware scale.

The “final” Just Cause 3 PC specs have been posted up in the game’s Steam community hub, and differ slightly from the ones ‘leaked’ via a blurry photo of the back of a retail box. No major changes, but the GPU demands under ‘recommended’ have been bumped up slightly. Minimum specs look the same.

Here are both Min and Recommended.

These are not a million miles away from the specs required to run Avalanche’s Mad Max (a little more demanding in the CPU area, and asking for more GPU juice at the high end). Both Just Cause 2 and Mad Max were rather terrific, scale-able PC ports, so we’ll be hoping for more of the same from Just Cause 3.