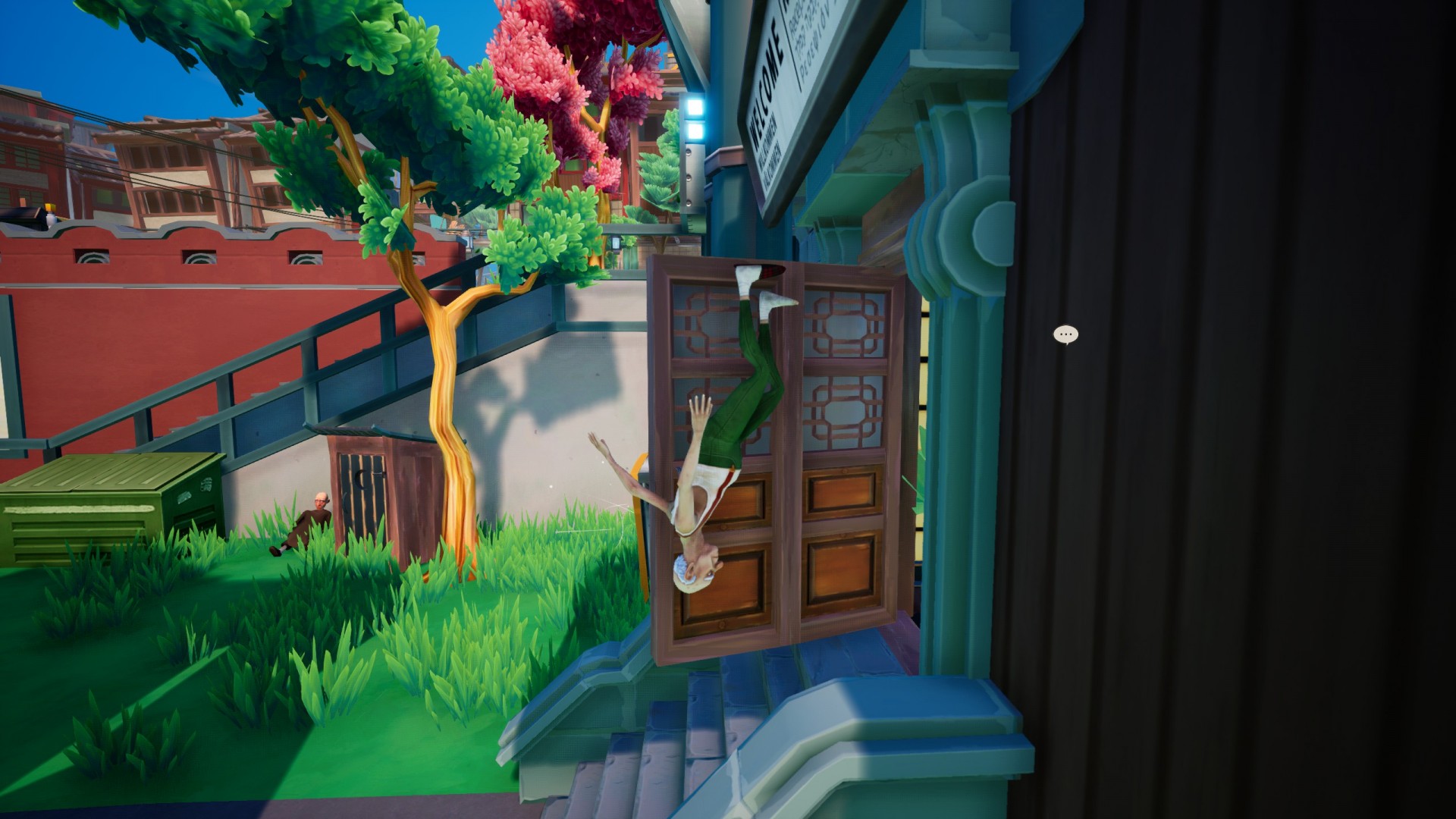 Just Die Already is an open-world sandbox game with gameplay that revolves around old people getting violently mangled. It’s got everything players might want: old people, inflatable pool toys you can bounce on, rolling a severed groin into a narrow area to acquire collectibles, you name it.

I was able to ask the game designer and game design comedian, Armin Ibrisagic, some tough questions about aging, blue cars, and Morgan Freeman.

PCI: What inspired you to go from goats to old people? At any point while making/playing Goat Simulator, did you ever think to yourself: “Man, this would be hilarious with an octogenarian instead”?

Ibrisagic: When you think about it, old people and goats are actually very similar. For us, it became obvious that we wanted to make a game about old people as soon as we had our first old person get hit by a car in our first prototype. After that, we just put more old people in the game and more crazy things that wanted to hurt you.

PCI: When people get older, they tend to care less about what other people think. Were any of the activities in Just Die Already influenced by things you’ve heard the elderly say or do?

Ibrisagic: The main things that inspired the activities you can do in Just Die Already come from our own predictions of how retirement is going to look like in the coming 30-50 years. In our game, everyone is busy playing video games and no one is taking care of the elderly, so you are sort of left to your own devices. The true purpose of the game is actually to prepare you for the retirement that is awaiting you if you are playing the game or reading this interview.

PCI: There’s an unlockable hand grenade filled with bees in the game. If you had one of those, who or what would you throw it at? And why? And HOW?!

Ibrisagic: I would throw it at any game journalist website that gives us a bad review. And yes, that is a legal threat™. 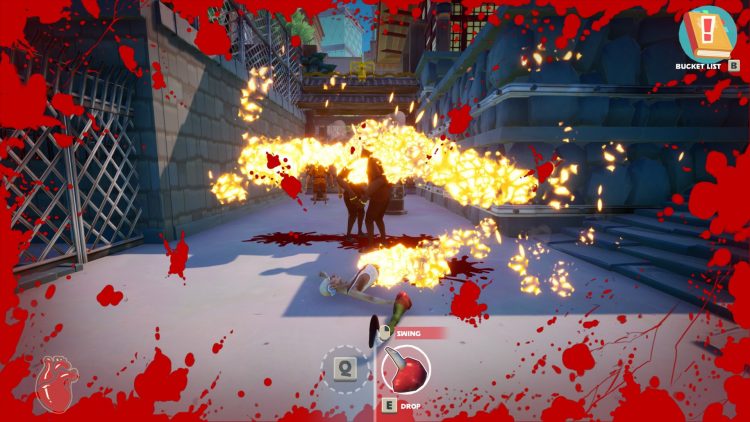 PCI: How do the characters keep walking around after their lower halves get separated from their torsos? Does the world of Just Die Already have black mages aiding the elderly?

Ibrisagic: Relax, it’s not real. They can keep walking when their lower halves are separated from their torsos because they are imaginary game characters.

PCI: The billboards in the game are hilarious. I think I spotted a Requiem for a Dream reference as well. What’s the process for deciding what jokes make it onto the billboards?

Ibrisagic: Thank you! Glad you enjoyed them. Generally, the process in making them is that the whole team pitches billboard ideas to the artists that make the billboard. We then start huffing paint thinner until the voices in our head tell us which billboards to pick. We use the same technique to decide on all of our in-game features as well.

PCI: The drivers in the game all drive the same blue car. Also, they’re constantly speeding and crashing. Why is that? Are all the drivers old people?

Ibrisagic: Good catch. The drivers are constantly speeding because there are no speed limit signs. If it annoys you as a player, you can divert traffic by putting trampolines in the road and making the cars hit them and bounce off somewhere else. You can also destroy cars if that’s what you want to do, although I’d recommend doing it only in-game, because it’s probably illegal to do in real life. With that said, I’m not a lawyer so I don’t know. 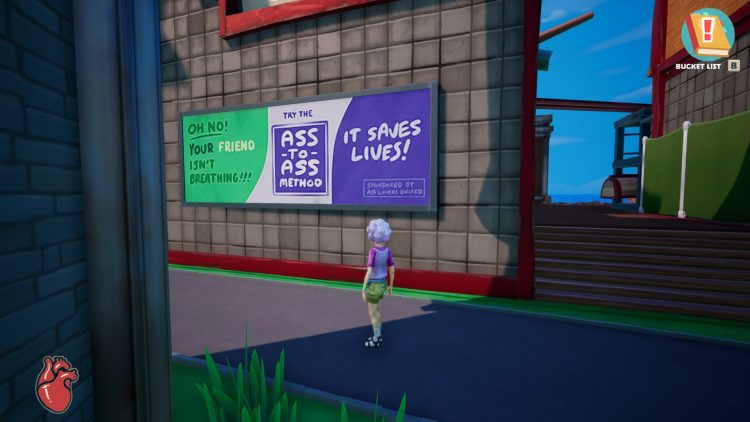 PCI: There’s clearly a lot of satire in Just Die Already. What’s the main theme that the team hoped to make players think about while playing? Or am I projecting here?

Ibrisagic: The idea behind the game is to prepare young players for the retirement that they’re likely going to experience once they get old. We hope it’s going to make players more considerate toward the elderly in real life. In case you really dislike boomers, our game is also a better outlet for your emotions than heckling them in real life.

PCI: Organizing a collection of goals as a bucket list is very clever. That reminds me of the movie The Bucket List. Do you think people will mod in Morgan Freeman and Jack Nicholson?

Ibrisagic: I hope so! We’re not allowed to add real people into our game because lawyers are nerds, but it should be perfectly fine for modders to do if they want to.

PCI: What’s something you wanted to have in the game, but had to be cut due to time, and/or going too far?

Ibrisagic: We had a glue gun that enabled players to attach whichever objects to each other. This was extremely prone to bugs since you could attach a moving car to another moving car, or you could attach a player to the bottom of a steamroller. We ended up removing it, but we might add it again if enough people start bugging us to do it.

We also had an idea to add an item that can turn any item into any other item in the game at random. You could end up making a broom turn into a sword, a catapult, or a building. Obviously, this was something that messed up the game completely and was a great way of inducing crashes. I still miss it though, since I enjoy producing bugs. 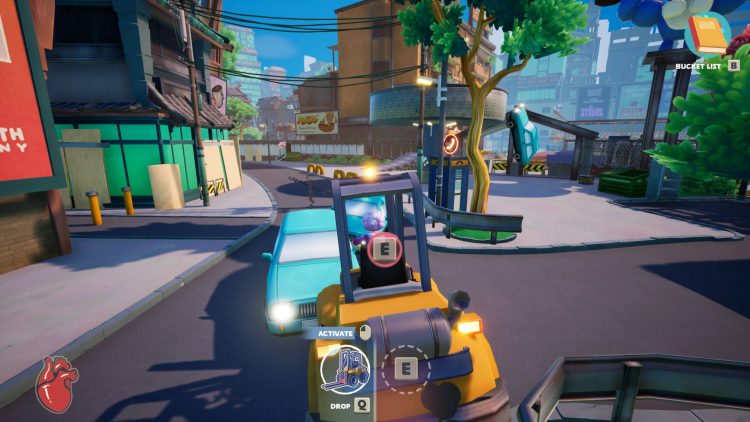 PCI: Similar to the last question, what sort of guidelines were there to ensure that the game’s content wouldn’t go too far with the humor?

Ibrisagic: Right now, the game is violent, but it’s not as violent as, for example, Itchy & Scratchy in The Simpsons. So we figured as long as we’re not going further than that then everything should be okay. Right..?

PCI: An old person driving a steamroller into traffic worries me, even in a video game. What in-game action would you most not want to see an old person replicate?

Ibrisagic: I strongly discourage any old people to tie fireworks to their bodies to try to reach any blimps flying above their city. In fact, anything that you could do in Just Die Already I would discourage people from doing in real life. And that includes crossing the street or putting on a hat.

We would like to sincerely thank Armin Ibrisagic for taking the time to warn us about hats and threatening us with bees. I learned a lot, and I’m sure you did, too, gentle reader. Make sure and check back with us this week when our Just Die Already review goes live. I’ll add pictures of the swelling in an update if Armin is unhappy with the score.