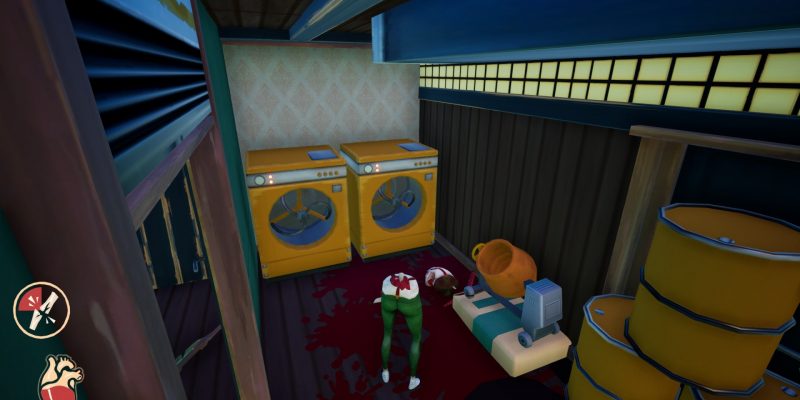 All I wanted to do in Just Die Already was bounce on a trampoline 50 times in 30 seconds or less. I found a trampoline, a good spot to set it up, and put it in place. But this trampoline had a guard. Every time I moved it, he’d show up and drag it away. The first time, he got hit by a car and sat in a crumpled heap in the street. “That’s what you get for doing your job, assclown,” I thought. I proceeded to jump on the trampoline, my elderly character’s head slamming against the roof with every bounce.

But the dude came back to drag my trampoline away. “I thought you were dead!” So I did what any responsible geriatric with access to vending machines full of weapons would do. I got a gun, walked across a street, careful to avoid the reckless, speeding drivers careening to and fro, and I shot him to death. He exploded, leaving a smear of viscera on the sidewalk. Mess with the bull, get the horns. But then he came back again. I realized then that NPCs respawn just as player characters do. You cannot kill what doesn’t die, so I decided to find a different trampoline and another low ceiling. C’est la vie.

Why was I doing that? Good question. You see, your character, an elderly person who has been thrown out of their shoddy assisted living facility for being too much of a goddamn asshole all the time, has a goal. A list of them, actually. After exiting the aforementioned hellhole, an individual hands you their bucket list. This list contains dozens of goals, many of them providing you with tokens. With 50 tokens, you can purchase high-quality retirement care without worrying about what tomorrow brings. Which is probably death. 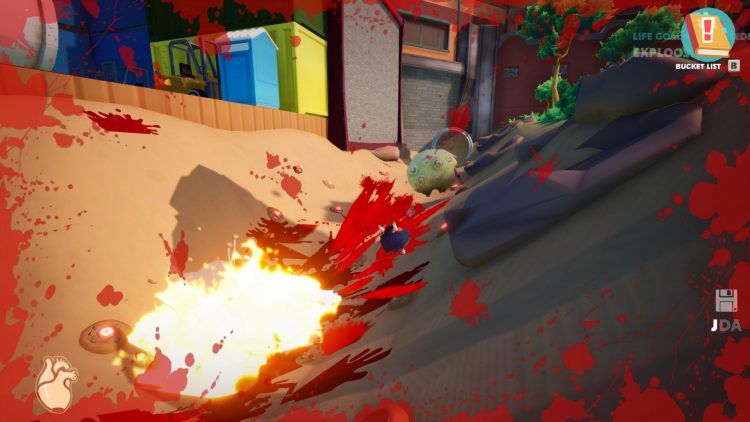 The basic structure is that you go about, accomplishing goals on the bucket list. Many of these are general. Just Die Already asks you to do a wide variety of arbitrary tasks. Eat a certain number of food items. Hit a specific amount of people with an ax. Electrocute yourself 50 times. Other tasks can only be undertaken at certain areas. Maybe you’ll need to kick a soccer ball to a goal guarded by a turret. Perhaps the field is covered with mines. Who can say? I can. Because the field is covered with mines.

Not all goals reward you with tokens, however. Some grant vending machine items. There are three kinds of vending machines: one for weapons, items, and a special one where you can spend the tokens you’ve earned. While you can retire as soon as you hit 50 tokens, you can also spend those tokens on special items and weapons to stock vending machines with, such as a black hole grenade or a flamethrower. You can swap between four characters on the fly. They’re interchangeable, so it’s down to preference. Regardless of who you pick, pandemonium will follow.

You can walk, jump, taunt other people, ragdoll at will, pick up items, and die horribly. There’s no button for that last one. A great many of the objects in the world can be picked up or grabbed. You can even grab and drag people around — into the path of a steamroller, if you want. The world is a dangerous place. A dangerous place that can be livened up with bee grenades and a gun that shoots sticky, explosive squid. There’s no reason to feel bad, though. As I said, nothing stays dead. You can respawn out of a nearby dumpster at any time. 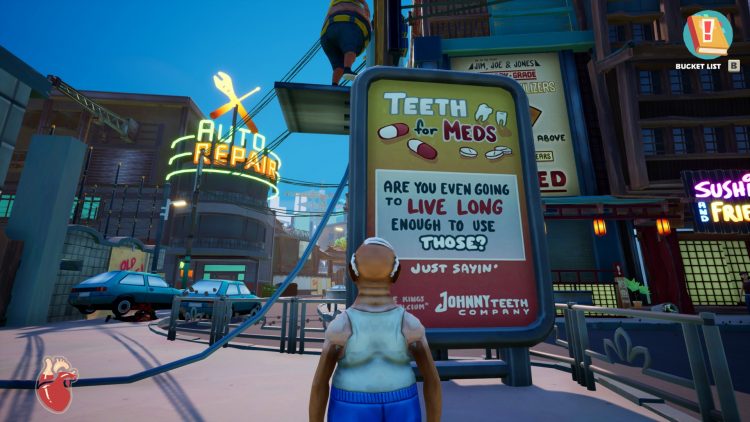 The zaniest thing is how damage works for player characters. Most parts of the body take damage independently. Get hit in the head? Your neck can get broken. Likewise, all of your limbs can break, resulting in you dragging your limp appendages behind you. Any part of the body can be severed. This is sometimes encouraged, as you can’t move through certain doors without having the right amount of limbs. There’s a health meter indicated by a heart filled with blood. Not a cartoon heart, mind you. It has ventricles and all that good shit.

Just because your character loses their head, arms, legs, and entire torso doesn’t mean they’ll die, though. You can continue to roll around as a crotch. Only black magic could explain this. Similar to the doors that you’ll need to sever limbs to enter, there are spaces that can only be reached by rolling into them after losing all extremities. Naturally, if you lose your arms, you can’t grab anything. But there are tokens hidden throughout the world that you only need to touch, so roll away. Some things are instant death though, such as falling into the water at the docks. It’s infested by sharks and they do not like old people.

Just Die Already is purely silly fun. It can be cumbersome to control and the physics are wacky, but that’s part of the charm. The main highlight is just dicking around in the world while you get your character obliterated repeatedly. If you enjoy sandbox carnage, then you’re who this game is for. But the bucket list system, which is reminiscent of Tony Hawk’s Pro Skater, offers enough direction to keep goal-oriented people playing. The focus on token collection is also reminiscent of collect-a-thon platformers. Granted, the humor is dark and off-kilter, so it won’t be for everybody. 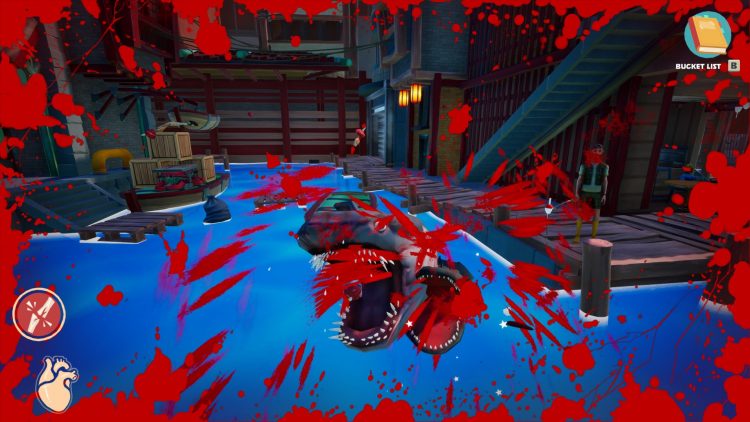 But it’s just fun to explore the world. There are plenty of secrets to find and the design is quite strong, even if I do occasionally find myself in an area I can’t figure out how to leave. It also runs very well, easily granting over 120 fps on midline cards, even at 4K. Just Die Already is bright and colorful as well, and it’s easy to pass the time by just wandering and getting into trouble. It succeeds at what it sets out to do. Sure, it doesn’t have tight, rewarding gameplay, but it doesn’t need it. It does have scenarios where old people can get turned into piles of flesh by swarms of bees, though.

I threw a grenade filled with bees at a bunch of martial artists. The bees killed two of them. You have to be wary of bees, as they are clearly quite deadly.

Fortnite x NBA: The Crossover to be available this Friday

Formula 1 cars race into Rocket League with a Fan Pack