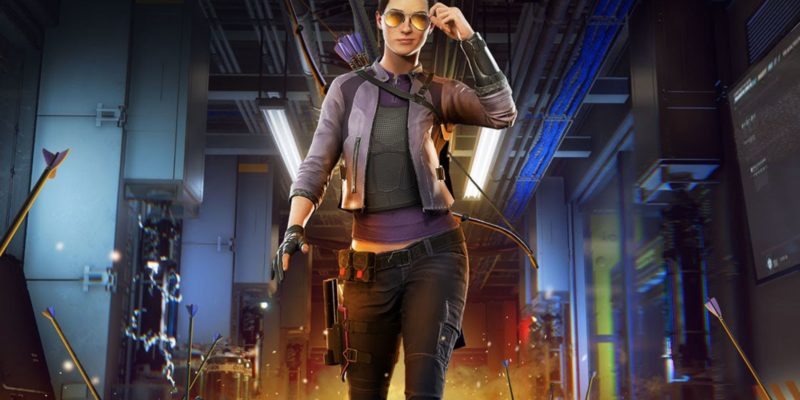 Post game content for Marvel’s Avengers will work like episodes of a TV show, or issues of a comic. With each part having its own self contained story relating to the character in question, but contributing to an overarching storyline. Kate Bishop will be the first post launch DLC character to join the roster in her story chapter entitled “Operation Taking AIM.”

Taking place directly after the events of the game’s main story campaign, Kate is looking for her missing mentor Clint Barton, aka Hawkeye. She soon discovers a conspiracy involving Nick Fury and time travel. It’s an element fairly common to the Marvel Universe, but not something I expected to appear in this game. Kate must travel to an alternate timeline to rescue Clint and stop AIM’s newest plan.

Kate is searching for her former mentor, Hawkeye, but along the way she discovers a conspiracy involving Nick Fury, time travel, and a frightening new enemy.

Kate features a heavy emphasis on quantum energy which allows her to do things like double jump, air dash, and teleport short distances. She has a variety of specialty arrows that can all be individually upgraded and can even summon a hologram of herself that can distract enemies and deal damage. She can even detonate the hologram for extra damage or swap places with it to travel large distances. She also comes equipped with warp arrows that can teleport her to wherever the arrow is fired. Overall, she appears to be a very nimble and agile character that can deal lots of damage if played optimally.

The last big piece of news is for the next chapter that will feature Hawkeye titled “Operation Future Imperfect.” This next DLC will release in early 2021 and features Hawkeye in a post apocalyptic future timeline that includes the Maestro. The Maestro is a villainous version of the Hulk that has Bruce Banner’s intelligence and the Hulk’s less than noble characteristics. He comes from a comic storyline of the same name as the DLC. It is cool to see the game expand into some of the more obscure corners of the Marvel Universe and I hope they continue to do so more in the future. Marvel’s Avengers is available right now and all this post launch content, including Kate Bishop and Hawkeye, will be free to all players.