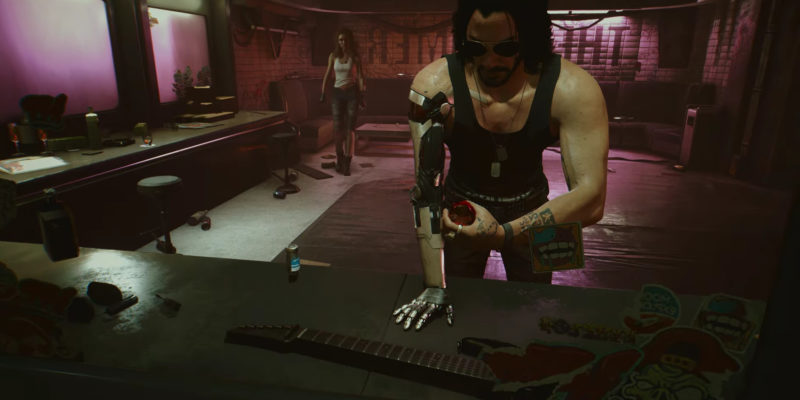 One of the biggest enigmas surrounding developer CD Projekt Red’s Cyberpunk 2077 is how the mysterious and aptly named Johnny Silverhand plays into the game’s story. Fans of the tabletop game should already have some familiarity with Johnny Silverhand – he’s a major player in Night City. But it wasn’t until today’s Night City Wire that we got some more info on the character, and from the actor portraying him no less, Keanu Reeves.

Just a little background before getting into Silverhand’s role in Cyberpunk 2077. When he was alive, the rocker boy found fame after deserting the US army and taking refuge in Night City. His band Samurai skyrocketed to the top of the charts before breaking up due to the keyboard player getting arrested for murdering her abusive boyfriend.

Even without a band though, Silverhand was famous, and used his platform to spread anti-corporation and anti-government messages. Life for Silverhand was good after that, until his girlfriend, a genius programmer named Alt Cunningham (that’s about as cyberpunk-y as it gets) was kidnapped by the Arasaka corporation, forced to make it a lethal program, and was then killed. Johnny swore revenge, and got it in 2020. He led a raid on Arasaka’s Night City headquarters that would end the fourth corporate war, and also his life. To save his team, Johnny fought one-on-one with Adam Smasher, a man turned killing machine. He was killed, but not before Militech, the company fighting Arasaka, blew the building to bits.

A ghost in the machine

That brings the story to 2077, with the fourth corporate war long over and Silverhand’s body never found. What is he doing in V’s head and what does he want? Reeves explained at least a few of his enigmatic character’s motives.

Mainly, Silverhand still holds a grudge against Arasaka, and wants to see the company burnt to the ground. But while his digital afterlife is centered around a vendetta, Johnny isn’t always serious, although he’s certainly rough around the edges. Motion capture sessions shown during today’s Night City Wire had Keanu Reeves running around, yelling at another mo-cap artist, presumably playing the part of V.

Safe to say, players will be seeing plenty of Johnny Silverhand during their time in Night City, and luckily, not all that time will be bad. Reeves says that Silverhand “has got a sense of humor, if not a little dark at times. He’s very passionate — he cares. He’s kind of naïve, but he’s also super experienced in life.” His position in V’s brain will certainly mean that the two will butt heads at points, but it’s reassuring to know that there’ll be some buddy moments with the rock star living in players’ heads.

Cyberpunk 2077 is set to release on December 10, and will be available on PC via the GOG store, Epic Games Store and Steam.