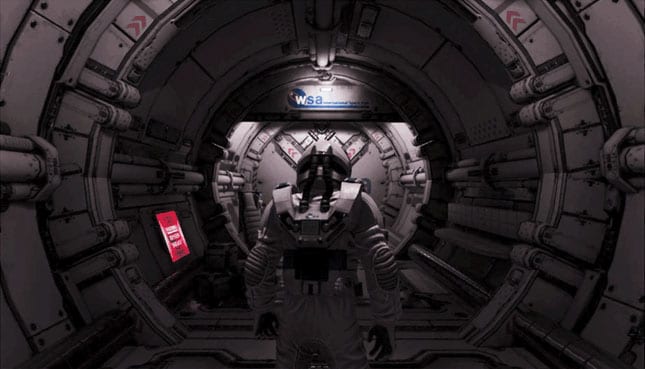 KeokeN Interactive are currently working on a game called Deliver Us The Moon and they are wanting gamers to chip in and help to get the game made.

This episodic adventure survival game follows the adventures of a rogue astronaut sent to the moon on a secret mission and ultimately save humanity from extinction. The story is set in the near future and the WSA (World Space Agency) has been created but politics and infighting between the different nations has got in the way and with the planet’s resources critically low, this secret mission is the last hope.

Most Kickstarters don’t usually have much to show at this stage but we have actually played a small section of the game right at the start where our hero boards the rocket and heads into space.

After taking lifts to the top of the rocket tower we had to go through a load of launch procedures in an exact order so as not to blow the thing up.  Once in space we were tasked with bringing the space station online having to work quickly while our oxygen depleted. We also had to bring the game’s ASA (All Seeing Eye) companion robot to life. It was just as we left the station to explore the lunar surface that the demonstration ended.

So far it’s looking pretty decent, there were some simple puzzles to solve and it did leave is wanting to find out more and also what lies waiting for us on the lunar surface. The game will also feature lunar vehicles, a jetpack, tools and environmental hazards when it’s been completed.

KeokeN Interactive are looking to raise €100,000 and €64,391 of that has already been raised. Watch the pitch video below, and if you like what you see, drop over the the Kickstarter page.