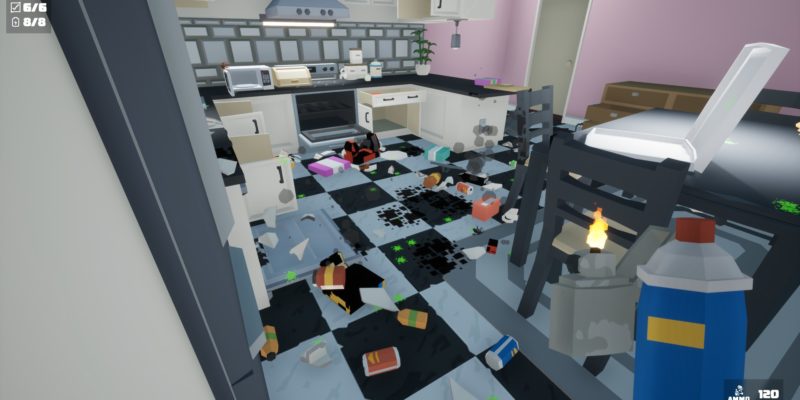 A lot of people really don’t like spiders. I’m sure that’s going to come as a rather shocking bit of news to you, but it’s the truth. Despite the fact that they’re frequently harmless and have a tendency to dine on some seriously obnoxious insects, many are deeply perturbed by all their furry legs and webs and scurrying. Me? I hate wasps infinitely more. Kill It With Fire is a game built out of the hyperbolic hatred of arachnids that so permeates the lives of many. Regardless of my lack of issue with said creatures, it’s still a unique, entertaining little romp about going overboard while killing spiders.

Kill It With Fire doesn’t waste any time, nor does it pull any punches. You play as an individual who works for an extermination company that shares the game’s title. Your mission is simple: kill a bunch of spiders so that you can get more stuff to kill even more spiders. The game has eight main stages to explore and slaughter your way through, plus a ninth one that isn’t quite like the others. Kill It With Fire is fairly short. Its eight main stages can easily be completed in a few hours, even if that final stage gives you reasons to more fully complete the game than you might otherwise.

The game’s structure is simple. Each stage drops you in a location, all of which contain a certain number of objectives. Completing these objectives is wholly unnecessary for simply unlocking the subsequent stage, however. If you just want to see the levels themselves, all you need to do is find and kill spiders. Doors block your progress, and can only be unlocked once you move beyond a set spider body count. Each stage is concluded once you open the exit door, which also requires that you dispatch a specific number of the eight-legged creatures. 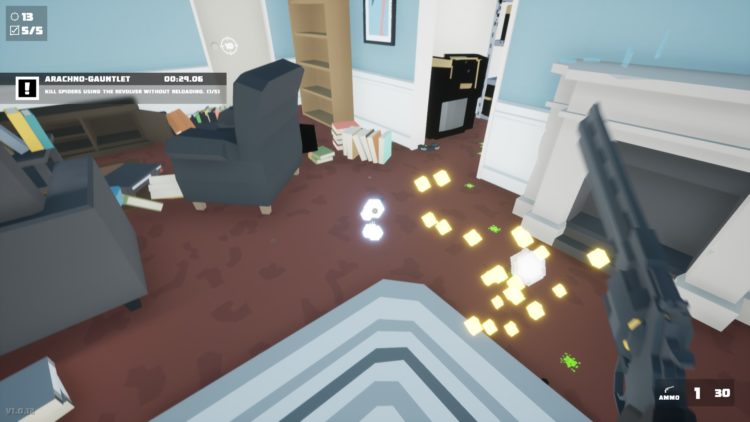 The level locations start fairly basic. You begin by clearing out houses, but it doesn’t take long before you’re let loose in larger areas such as a convenience store, a garden, or an office. These levels are well-designed and easy to navigate. They’re also highly interactive, as you can pick up or break a great many of the objects that populate the levels in Kill It With Fire. How different the levels are combined with the emphasis on exploration and objectives reminds me of the early Tony Hawk games, which is weird to say.

The objectives that are pressed upon you in Kill It With Fire are probably not what you’re expecting. Many of them are rather mundane, but often amusingly so. Some of them even require some light puzzle solving, such as one where you need to scan 10 items or less for a grand total of at least $100. You also must occasionally arrange certain items on pedestals in specific orders. The truly mundane ones task you with picking vegetables, cleaning out a fridge, or putting tools away. It’s fairly silly stuff that might be boring to you, depending. I don’t mind the busy work too much, though.

Completing objectives nets you upgrade points to spend in certain locations during missions. To make it perfectly clear, Kill It With Fire is quite focused on carefully searching the levels. You get a radar for finding spiders early on, but it still requires you to search them out before a later upgrade pinpoints their location. These radar upgrades are also found in the levels and can be purchased by finding the many radar batteries strewn about. Some of these can be seriously tough to find. 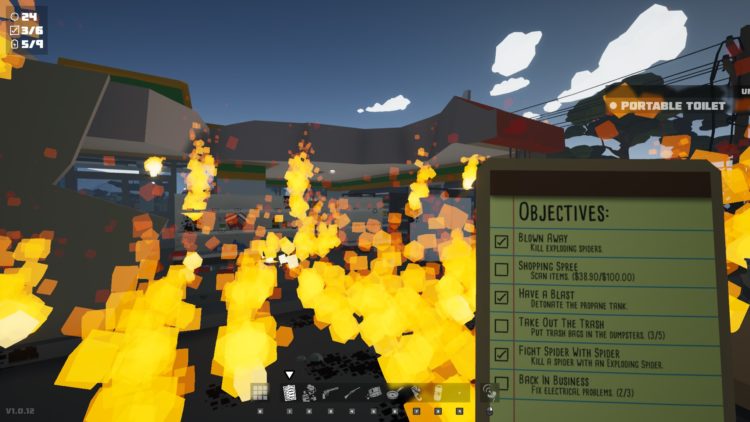 Completing a certain amount of objectives will unlock a container or two that nets you some good stuff. But completing all of them is how you unlock the arachnid gauntlets; tough challenges that you’ll need to best to unlock things in the game’s final level. There are eight gauntlets in all and you’ll need to complete at least half of them to unlock anything at all in said level. And when I say they’re often tough, I’m not kidding in the least. The very first, for instance, requires you to kill five spiders with a six-shot revolver without reloading — while on a time limit. Hitting a tiny spider with a revolver probably doesn’t sound all that easy, does it? Well, it isn’t.

It’s a little weird that you can shoot spiders with a revolver in Kill It With Fire to begin with, but a big part of the game’s fun is playing around with the ridiculous weapons it gives you. New ones can be found by exploring the levels and some of them are just wild. The only thing you start with is the clipboard that gives you your objectives. Naturally, this clipboard doubles as a melee weapon. Shortly after, you find a can of hairspray that you turn into a miniature flamethrower with a lighter. You’ll also get a frying pan, a weed wacker, plastic explosives, a shotgun, and a large variety of other things. Bags of snacks too! It’s weird!

Many of these weapons aren’t all that useful. The frying pan is the most reliable weapon in Kill It With Fire, but that doesn’t mean it’s the most fun to use. If you’re the type of person that loves screwing around with crazy weapons, you’ll likely enjoy experimentation. There’s a lot of creativity on display in the weapon department, and a lot of them are laugh-out-loud funny too. But it’s not like the spiders you’re up against are all that difficult to deal with. 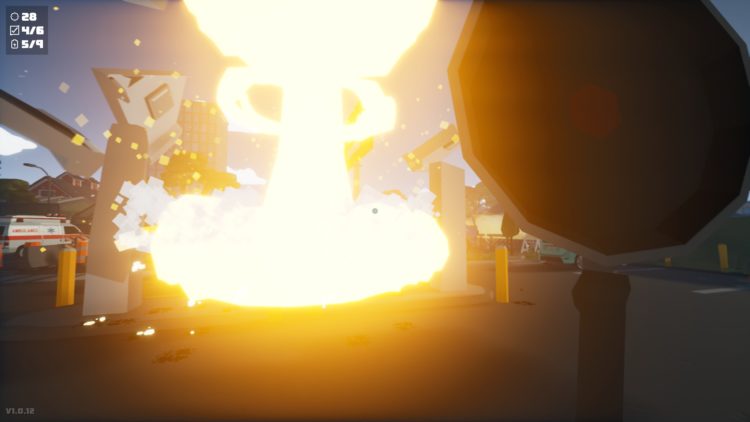 You can’t get hurt in Kill It With Fire. There are a variety of different spider types, but you only need to worry about finding and destroying them. The worst one can do is shoot webbing in your face. Most of the spiders are interchangeable, though, aside from appearances. This is mostly fine because they’re spiders. I’m not sure what else you’d want them to do.

Caught in the web

Kill It With Fire may not be a lengthy game, but it makes up for it by being fairly enjoyable and pretty darn funny in spots. Its premise is unique and the way it goes about its business makes for a compelling experience, even if the thought of seeing a spider doesn’t give you the heebie-jeebies. If you’re looking for a short game where you can absolutely tear apart levels in order to eradicate harmless creepy-crawlies, the game is probably worth a look. 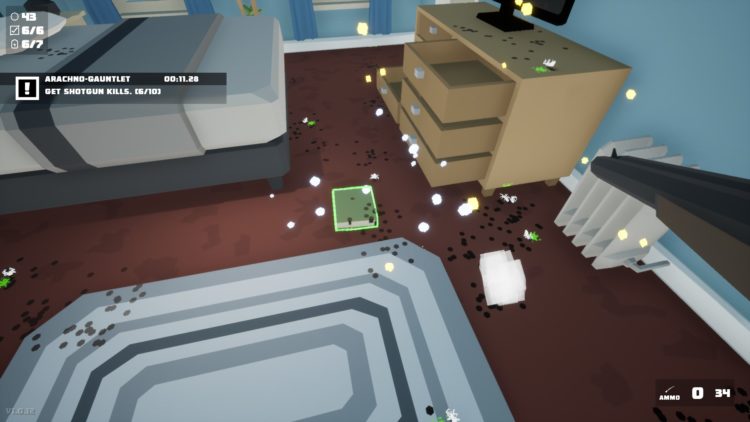 Kill It with Fire

It may be very short, but Kill It with Fire is creative and entertaining all the same. I'll never look at a frying pan the same way again.

Halo Infinite has been delayed until 2021

Vampire: The Masquerade – Bloodlines 2 delayed into 2021