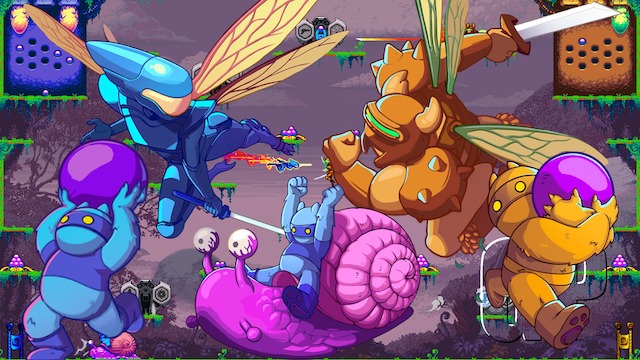 A new update has arrived for Killer Queen Black, the competitive arcade romp from Liquid Bit and BumbleBear Games. And with it comes a whole new reason to celebrate with your friends.

The Hydra (1.60) update, which is now live, finally introduces eight-player local battles to the game. In addition, it includes other tweaks and features, further detailed in the breakdown below.

What does the Killer Queen Black update include?

Along with being able to play with seven others in local battle, Killer Queen Black has some new stuff to check out. First off, a single player can now start both custom online and local matches however they see fit. This should make it easier to get right into a good match.

Next up, bots can now fill in for player spots in local and custom matches. This should be helpful for those that don’t have eight players to go up against. There’s also an option to shuffle teams automatically, for those that want to mix things up.

Streamers will take notice of a new mode that specifically allows them to show off names both in-game and in menus. It’s an ideal option for those that want their fans to see where they are in the middle of a match. (“Yeah, that was just me getting obliterated right now. Just ignore that.”)

Finally, maps will mix things up more often, skewing toward “more variety and fewer repeats,” according to the developers. Various “bug fixes and UI improvements” round out the patch additions.

To celebrate the new update, Killer Queen Black is on sale for a limited time. Players can get it on Steam right now for $9.99. And if you love multiplayer games, like we do, you shouldn’t miss it.

Check out the trailer and you’ll see just how addictive this gets.

Half-Life: Alyx gets an AMA, Half-Life collection is F2P until Alyx launches

Doom Eternal will offer over 20 hours of demon-bashing gameplay