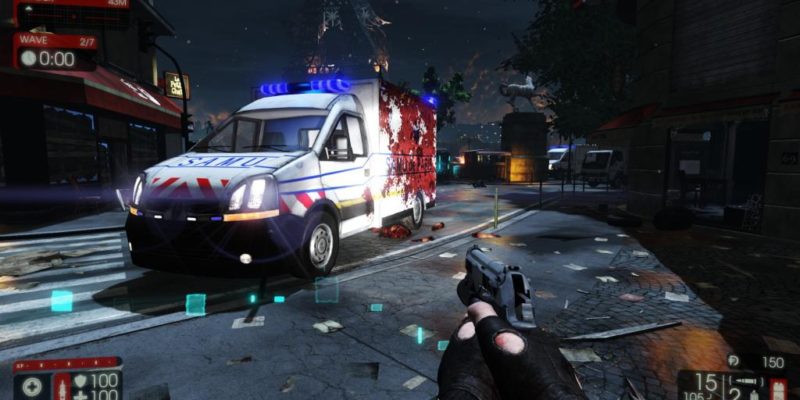 I can’t actually remember if that was caked in gore before the level started or not. That’s… pretty much Killing Floor 2 in a nutshell.

I don’t really get excited for games much anymore. When I was younger, I’d pore over screenshots and adverts in magazines, and re-read previews over and over, and dream of the moment when I’d be able to play Man Blaster 3 or Kitten Jumper or whatever.

Now, I’m old and jaded. I’ve played a billion games, and I’ll play a billion more before Kitten Jumper 12 is out, so I don’t really tend to get my hopes up. I’ve got plenty to do until it’s out, after all, and if it turns out to be the best thing ever… well, I’ll find out when I play it. 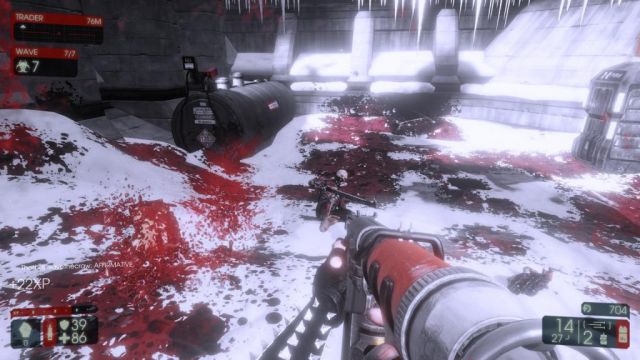 Welcome to how every single level looks after about 30 seconds.

With that in mind: I was actually really looking forward to Killing Floor 2. I have a soft spot for the first game; well-made, casual, co-op shooters with a degree of randomness and a lot of variety are pretty rare, and regular updates kept things fresh. Tack on a mind-boggling gore system that lets you reduce enemies into limping Jackson Pollock paintings, and it’s hard for a gorehound like me to not get excited.

And now I’ve played it. And, while I’m not as excited as I was, I’m still really rather pleased. 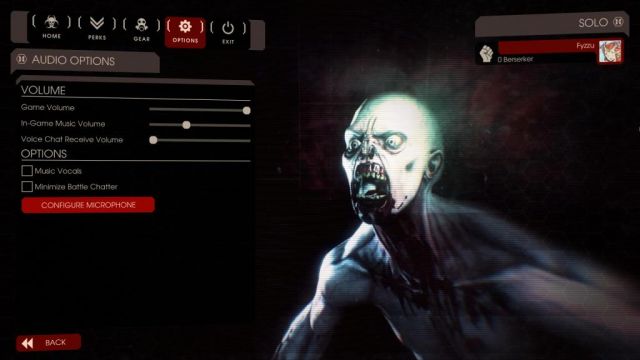 Although Gollum’s appearance on the menus was a pleasant surprise.

Killing Floor 2 is also a well-made, casual, co-op shooter with a degree of randomness and a lot of variety, even in this Early Access stage. You and a team of five like-minded cohorts are dumped into an enclosed area, and you have to fend off waves of Zeds (the PC term for “horrific bio-monstrosities composed of rotting flesh and fused metal”) until the boss turns up. And then you fend him off too. And then you do it again.

That… actually is pretty much the entire thing. I mean, you need to manage your cash (earned by killing Zeds) and you’ve got plenty of tactical options in terms of choosing where to fight, and which doors to seal off, and so on, but for the most part you’re shooting Zeds and trying to stay alive. 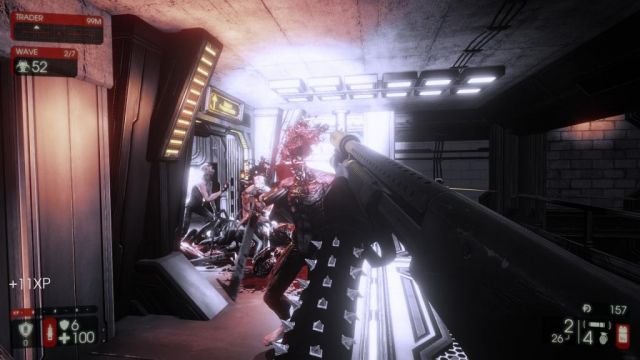 Shotguns do feel rather good, particularly at close-range, in slow-motion.

There are four classes to choose from, each of which offer their own little perks, and get different bonuses from levelling up. The Commando has a nice line in automatic weapons; the Support likes to weld doors shut and use shotguns; the Field Medic can heal from afar; and the Berserker has some ludicrously powerful melee weapons. Each class gets experience from different actions (using their class weapons and doing what their class is meant to do, primarily), which unlocks further perks and stat boosts. They’ve all got different weapons (any class can purchase any weapon, although only one class gets experience from using it), and different grenades; the Medic, for instance, hurls out grenades that explode into magical healing clouds… which damage Zeds wandering through them.

Early Access offers three maps, each with a wildly different environment. The ruined streets of Paris, lit with fires and neon signs, is probably the best-looking of the bunch, but I’ve got quite a soft spot for the snowy mountain outpost in terms of actual layout. Plenty of choke points, plenty of wide-open areas, and plenty of places to make a stand or run for your life.

I can’t actually remember if that was caked in gore before the level started or not. That’s… pretty much Killing Floor 2 in a nutshell.

What you might not be expecting – considering the game looks like a fast-paced Serious Sam-style shooter with hordes of enemies – is just how bastard difficult it is. You have to be precise, manage your ammo, and manage your team. The early waves are easy, sure; you’re fighting basic, slow-moving Clots, and they’re easy to rip apart (literally, in some cases, because the gore system really is rather impressive). But later – when Fleshpounds start to turn up – you have to be very, very careful. I still consider it a “casual” shooter, in that I’m likely to play it in short bursts rather than marathon eight-hour sessions, but that in no way means it’s easy or simple.

Reloading takes time. Even the fastest weapons leave you vulnerable for a couple of seconds while you slam in another clip, and those two seconds are easily enough time for you to be swarmed by a group of Clots or slashed across the face by a Scrake. On the highest difficulties, paying attention to when your team is reloading, where they are, and how far you can safely backpedal are imperative. Putting enemies down with a minimum of shots is imperative, both because you want to kill as many as you can before you have to reload, and because ammo gets incredibly limited on later levels where there are almost as many Zeds as you have bullets. And yes, a Fleshpound will shrug off your shotgun blasts without slowing down. 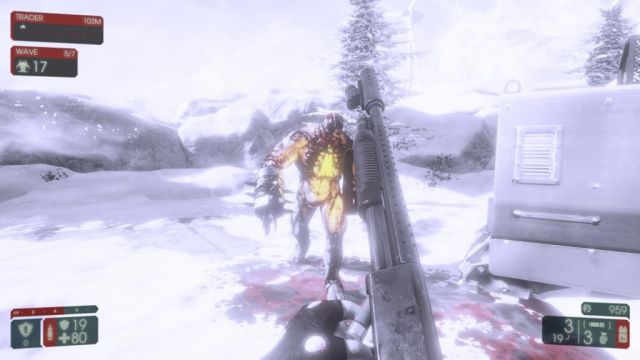 Caught on camera: the exact moment at which I soil myself.

Tying into this is a rather impressive melee system, which I’m pretty sure got tweaked a few times during the early access of the Early Access. Even if you’re playing as a class other than the melee-focused Berserker, getting the hang of how close-up combat works is important. It saves on ammo. It lets you kill

And it really is a full-fledged system, rather than a last resort. Melee weapons have multiple attacks that do different amounts of damage, have different wind-up times, and swing in different directions. You can parry, keeping you relatively safe from the melee attacks of even the most powerful foes if you time it carefully. With a decent Field Medic watching your back, it’s entirely possible to charge into the thick of a group of foes, swing your giant exploding warhammer, and come out of it covered in blood that isn’t yours. 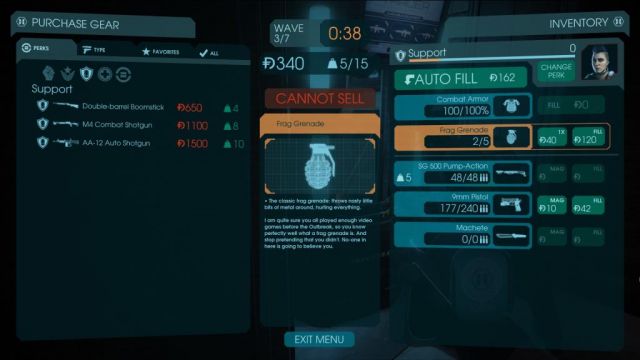 There’s a nice vein of sardonic humour running throughout, particularly in the shop.

Perhaps the most important (and nebulous) thing, though, is this: Killing Floor 2 is really good fun. I was a little taken aback at first, particularly because most of the weapons don’t have a great deal of impact to them; most enemies won’t be staggered just because you put a few shots into them, and that inevitably makes those shots feel a bit underpowered. But it’s very carefully balanced, and making a line of foes explode into a shower of ludicrous gibs is less of a given and more of a reward for handling yourself extraordinarily well.

Personal favourite moment? Much as I’ve loved playing as the Field Medic and saving team members who’ve gotten themselves into sticky situations, or unloading a full clip from the Support class’ AA-12 into an enemy until he’s an oozing red stain… I actually loved the Berserker most of all. Wading into battle against a larger Zed, carefully parrying, and then smashing his head into pulp with my giant exploding warhammer (I’d like to say that again: giant exploding warhammer) was a weirdly empowering experience. 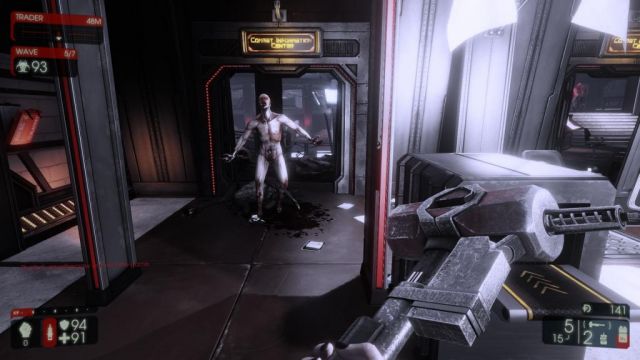 In a lot of ways, Killing Floor 2 appears to be a bog-standard sequel: it feels very similar, but looks a lot better. Dig down under the hood and spend a few hours with it, though, and a lot of the changes and tweaks become clear; this takes the concept of the initial game and runs with it, reworking a lot of the systems and making everything feel and function an awful lot better. There’s still a lot of work to be done – I have no doubt melee will go through another set of changes, there are still a fair few bugs and some extra polish required, and there’s going to plenty of balancing and the like – but what’s on offer is, already, bloody good fun. Emphasis on “bloody”.