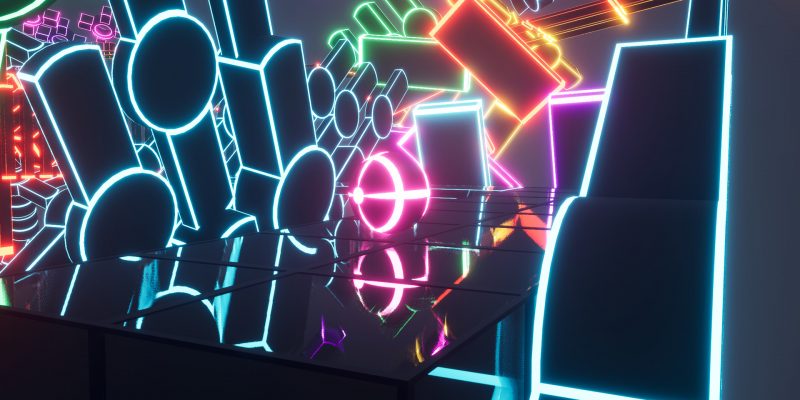 Kinetic Edge looks like a Fall Guys race taking place in a Tron-inspired futuristic world. In this physics-based racer, you need to battle it out against players while navigating racetracks, gauntlets, and other arenas with rollable objects of various shapes. Kinetic Edge’s physics-based multiplayer fun will release on Steam for PC on February 5. You will be able to pick it up for $12.99 USD.

Seacorp Technologies founder Richard Seabrook describes Kinetic Edge as a compendium of different games that draw on the same core gameplay. However, it’s clear from the trailer that each one will require players to use a different set of physics-based skills. Seabrook believes the gameplay is the perfect balance of laidback fun and addictively challenging gameplay.

At launch, there will be six game modes for players to compete in. You can see what most of them entail in the trailer below.

Kinetic Race is the standard ‘first one to the finish line’ mode. Race against friends, the clock, or players online. Arena mode challenges you to stay in the green zone for as long as possible while knocking other players out of it. Survival mode serves up increasingly difficult challenges until only one shape remains. Kinetic Golf is exactly what it sounds like.

Kinetic Maze is an interesting one. It takes place in a procedurally generated level that constantly changes. You can choose from three maze sizes, 10×10, 20×20, or 50×50. The mazes are color-coded and there’s a distance meter to help you out. However, it’s chaos in the narrow corridors and friends can easily lead you astray.

Kinetic Gauntlet is a mode that challenges you to survive for seven minutes with just one life and no checkpoints. This level is the hardest that Kinetic Edge has to offer and will push your skills to the limit. There’s even a Gauntlet training mode to help you prepare for the challenge. Kinetic Gauntlet is also the only mode that can be played in single-player. For now. Seacorp Technologies has already promised additional modes will be added in the months ahead.

Don’t forget the release date of Kinetic Edge by adding it to your Steam wishlist.

Project Winter releasing on Xbox and Windows 10 store, with cross-play

Quake Remastered gets Horde Mode and Honey add on