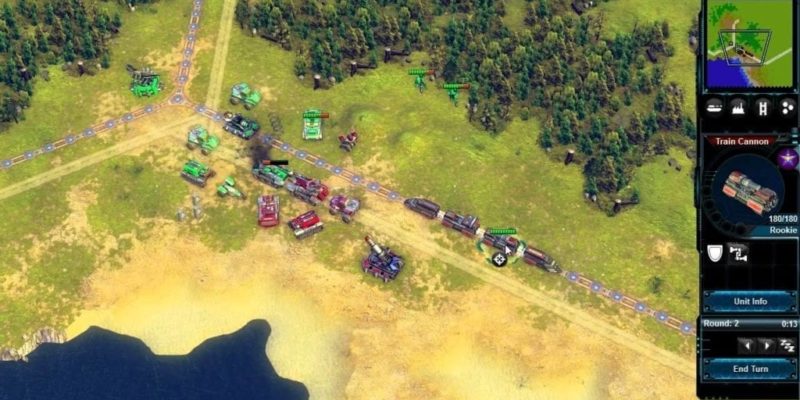 The new DLC contains a whole new type of unit – Trains – with different sorts of engines and wagons (Raptor, Big Al, Sabretooth, Mammoth). These can be combined freely and put to use for transportation or battle. “Trains” also brings two additional multiplayer maps and another single-player Challenge Map into the real-time strategy title. Furthermore, there’s a new single-player campaign available, providing players with more than 15 hours of tactical and challenging gameplay.

The release of “Trains” is, without a question, the biggest update to Battle Worlds: Kronos so far. It’s not the first one, however. Since its initial launch in November, the game has seen numerous changes and improvements. For example, King Art implemented community features and a league system, giving competitive players the chance to compare their progress with others. Creative minds can use the level editor to create their own worlds and share them with the community. By adding a level editor, the developers made sure that there is a never-ending supply of unexplored levels, featuring new challenges. Other changes were made to ensure smoother gameplay, such as giving players the option to skip animations and speed up AI moves. The tutorial of the Kickstarter-backed PC game has been extended to ease new players into the vast sci-fi world. There were more general improvements as well, including game performance, sound and graphics changes. Last but not least, King Art added social features, like a friends list, as well as a match-making system to guarantee fair battles.

“We’re working very hard to continuously improve Battle Worlds: Kronos and to keep content updates coming. It is important to us to listen to the community, because without the players we wouldn’t have been able to release the game in the first place, let alone provide free DLC later on,” says Jan Theysen, CEO at King Art Games.