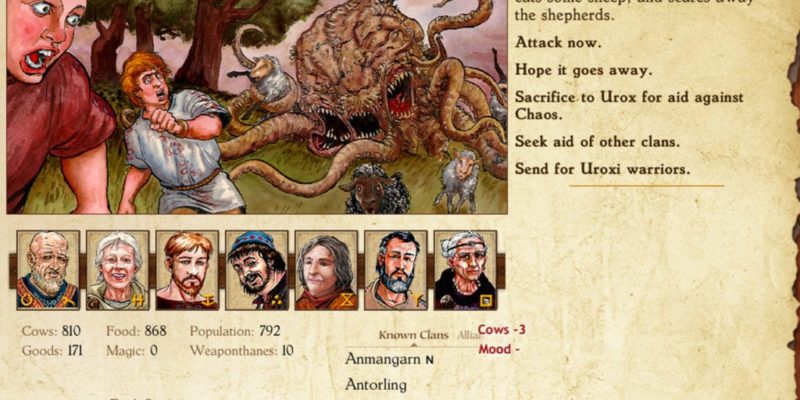 The venerable strategy-meets-choose-your-own-adventure game King of Dragon Pass is now available through Steam, complete with an additional 48 new scenes.

I think those scenes are only “new” in comparison to the original PC release though. King of Dragon Pass had a slightly bizarre release process, which I will now attempt to explain.

It came out originally on PC (which is the version GOG sells,) then got an Android version which fixed a bunch of bugs, added some scenes, and changed the UI a bit (the Steam release is a port of this version,) and then it also got an iOS release which added/fixed even more things.

But the iOS release and Steam version development periods overlapped (they were done by different companies,) so the improvements in the former are not yet in the latter. They might be at a later date.

There’s a fairly in-depth post about the Steam release at the King of Dragon Pass blog, but even this admits to being “not completely sure of the specifics” because a separate company called HeroCraft did the Steam version.

It confirms things like Steam cards and achievements, and notes that the economics system is not quite so harsh in this release.

King of Dragon Pass is a game I should really play more of, and puts you in charge of a vaguely Anglo Saxon village counsel who need to maintain food reserves, sign diplomatic treaties, and further their ambitions. From what I recall of the game, though there is a much broader ‘big picture’ strategy going on, most of your day-to-day activities involve things like sorting out the aftermath of a rival clan’s feisty poet sleeping with the daughter of a local farmer.

There are also plenty of bizarre, otherworldly events (such as the image above) among the 600 or so in the game. Choice and consequence aplenty, basically.