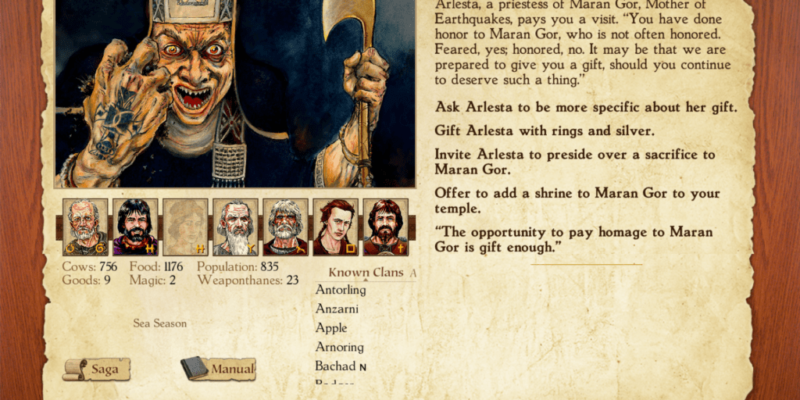 There are no games like King of Dragon Pass. Not really. Titles like The Banner Saga share a similar fantasy-Norse aesthetic, and if I had to choose a game that best approximates the season-to-season assignment of tasks and potential long-term consequences of a foolish mistake, I may have to opt for Football Manager. But neither of those games, nor any other you can name, are quite like King of Dragon Pass.

Part text adventure, part local council management sim, and part theological study into a pantheon of pretend gods, King of Dragon Pass is a demanding and sometimes cheerfully obtuse game that has just been re-released on Steam.

The original version from 1999 has been available on GOG for a while (and is currently cheaper), but this Steam edition has some changes that are well worth considering. It’s debatable whether they’re all for the better, though the majority are likely to be welcomed. 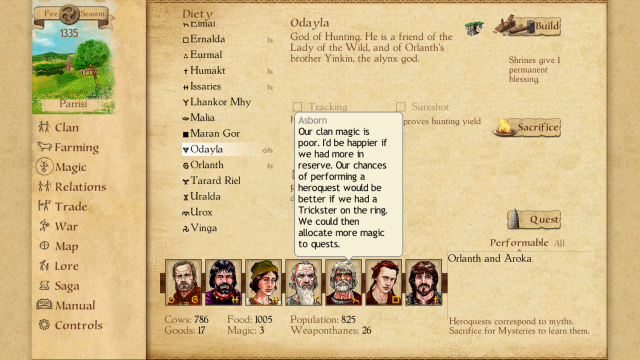 To push that Football Manager analogy a little more, these guys are basically your assistant coaches.

The Steam release is a port of the Android version, and comes with more events, more advisers (who are now also more talkative), bug fixes, and the ability to run happily at resolutions of at least up to 1920×1080. There are currently a few things missing though. The ‘Tula’ screen (a sort of SimCity-ish shot of your village and its surrounding lands) is not present in the Steam version, as it was missing from the Android release. At present, there’s no way of running the game in Windowed mode either. That’s a small oversight, but an annoying one.

The encouraging news there is that HeroCraft (the studio responsible for publishing this port) are planning to bring all of the additions from the iOS release (which came out after the Android one) to the Steam version as soon as possible. This will include the return of the Tula screen. They’ve made positive noises about implementing Windowed mode too.

Assuming those things come to pass, the Steam version of King of Dragon Pass should wind up as pretty much the definitive choice. If not, it’s still a decent option with some tangible benefits over the original. The only other significant changes are developer-sanctioned ones like the automation of Crafters (and the tension-boosting removal of manual saves), or mobile-influenced changes to the UI. Regarding the latter, it does take a short while to get used to holding a click and dragging to move through a list (rather than mousewheeling). 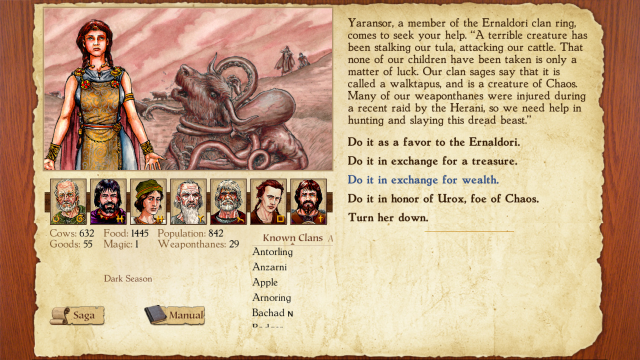 I’m no James Herriot, but that ain’t normal.

So those are the particulars of this release (there’s more here if you feel you need it), but you might still be wondering whether King of Dragon Pass is worth bothering with, or if I’m going to get around to explaining that Football Manager comparison. Yes. To both of those things.

King of Dragon Pass puts you in charge of a small clan with a rich cultural lineage, who’ve recently been forced to relocate to an area known as Dragon Pass. Through careful governance, wise management of resources, and respect for the old legends, you may emerge as the leader of a broader, united tribe or, ultimately, as the titular King of the land. That probably won’t happen though, because King of Dragon Pass is famously tough.

To quote creator David Dunham when asked about the change of wording from “easy” to “normal” for the lowest difficulty setting in this release: “The original labels were a mistake. The game was never easy”.

Part of this is down to the trust King of Dragon Pass insists that you have in whatever’s going on deep within the game’s code-bowels. This is where it reminds me of Football Manager. In that game, you have to believe the match engine will somehow know precisely how to absorb your incredible tactic built around a ‘False 9’ forward. Here, it’s taken on trust that doing something like sacrificing to a god before battle is going to actually help in some way. After all, why wouldn’t it? 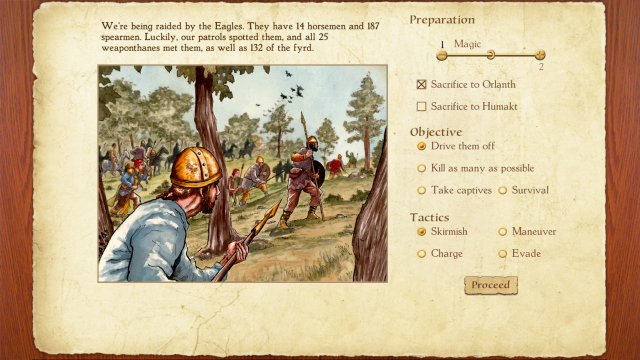 Battles are pretty text based too. Plug in your choices, and it’ll give you the outcome.

Where the two games sharply diverge is in the visibility of numerical aids. King of Dragon Pass conveys almost everything purely through text. When a magical rainbow shows up as an omen to boost your trade, you don’t get a big shiny “+10 to trade for the next year!” badge. Again, you just have to send out some caravans and trust that the game is telling you the truth.

This actually feels incredibly refreshing. With nearly all numerical crutches removed, players have to pay attention to what’s being said and how the strange and marvellous world of Glorantha really operates. Those who take the time to recall what their clan’s traditions are, and read through King of Dragon Pass’ meticulous mythology, will gain a distinct advantage. You also pick this stuff up through playing the game, so don’t take that as an insistence that it’s necessary to read every scrap of lore before making a decision.

The season-to-season running of a clan revolves around dedicating magical tributes to the gods (who, in this universe, are very much real), keeping your farmers and soldiers happy (a thankless task; they’re never happy), trading and diplomacy with nearby clans, exploration, raiding (everybody loves a good cattle raid, it’s the King of Dragon Pass equivalent of spirited banter), and, eventually, going on extremely specific ‘hero quests’ to recreate the exploits of your deities.

Between these activities, urgent decisions will pop up. There are some 600 of these scenes, and they form the delicious narrative center of the game. 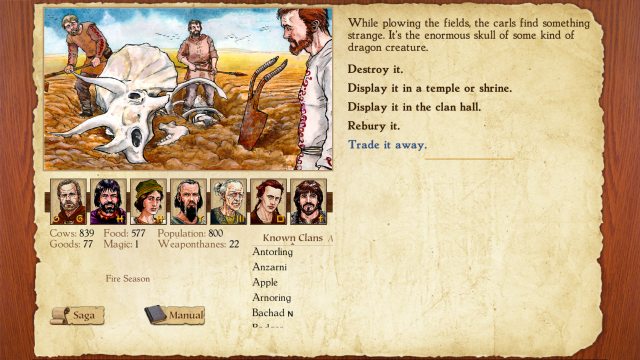 It was left there by Satan as a trick, destroy it!

Decisions in King of Dragon Pass can have far-reaching consequences, or spark a chain of events that won’t wrap up for several in-game years. Almost all of them have at least four out of five options where you’ll think “yes, that could work … or go terribly wrong”. Fortunately, you’re able to call on the help of your trusty ‘ring’ of clan advisors. Unfortunately (but quite amusingly), they will pretty much always offer contradictory suggestions. Sometimes they’ll just give you some esoteric poetry. It’s pretty much how I imagine most real life local council meetings.

What the game slowly teaches you (not through tooltips, but basic play) is that each of the clan ring members has expertise in a given area; matters of healing, perhaps, or warfare. But each is also tending to look out for his or her self-interest. The war guy may well be the best person to ask about increasing your number of soldiers, but he also wants that to happen. Balancing this knowledge against “what will be best for the clan?” will usually steer your somewhere close to a sensible choice.

Attempting to play with modern ideologies (of whatever strand) tends not to work too well. Partly because even self-declared peaceful clans apparently still cherish a good old fashioned cattle raid, and partly because contemporary political doctrine struggles with questions like “Hey, we found a talking rock in this world where gods and spirits are real, what should we do with it?”

No matter what the game throws at you – familial affairs, refugees, suspicious triceratops bones, or a race of talking ducks – you should always try to embody the spirit of your clan and act on their best interests. You just need to figure out what those are. 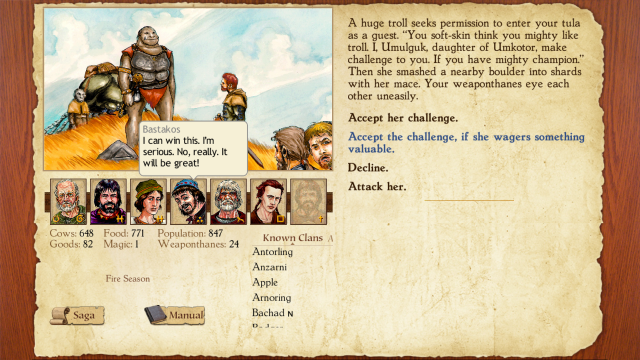 I believe in you Bastakos.

When faced with a game like King of Dragon Pass it can be tempting to look things up. I’ve known that temptation. But besides maybe scanning for some basics (which can actually be found in the manual, but the Steam overlay system makes that more awkward to navigate than it should be) and getting some help with the infamously ridiculous hero quests, it’s so much more interesting to go in blind. This new version has tempered some of the ‘economic death spirals’ it was previously possible to get into, placing a bit more emphasis on your general decision-making prowess and creating a fine saga.

As already noted, this isn’t quite the definitive version of the game (though could be, in time) and a bit more to tart it up from being a straight-ish mobile port would have been welcome. Even if that was just mousewheel support in the menus. The tremendous hook of King of Dragon Pass though, remains as strong as it was back in 1999. It’s a unique game with a distinct, and curiously believable (despite the bizarre chaos creatures and Actual Gods™) setting, coursing with a narrative essence that’s communicated almost entirely through text rather than numerical buffs and stats. What a rare and precious thing.

By Blake Grundman17 hours ago
Reviews 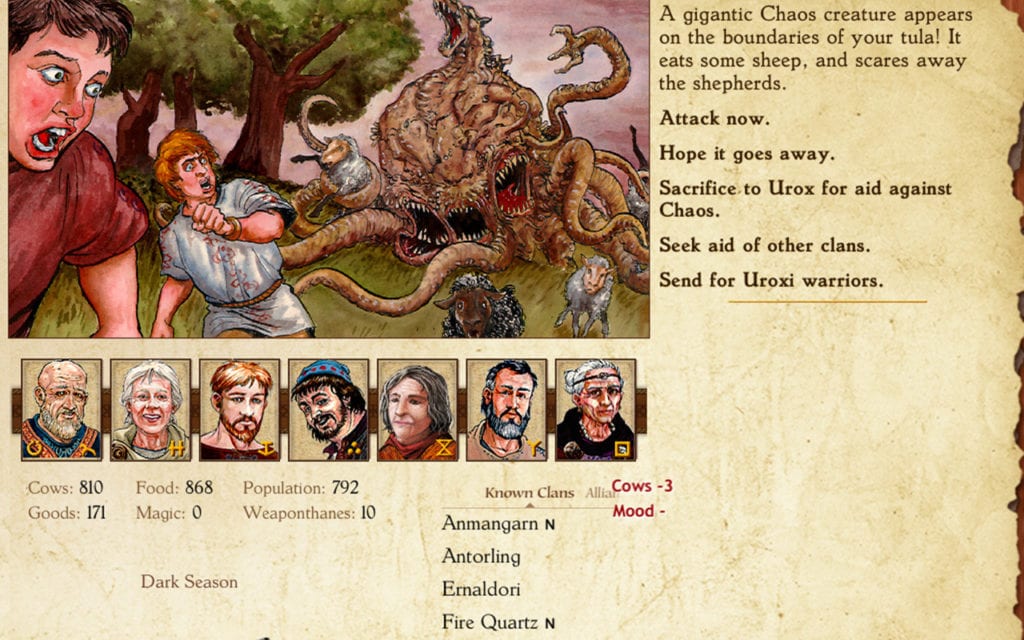