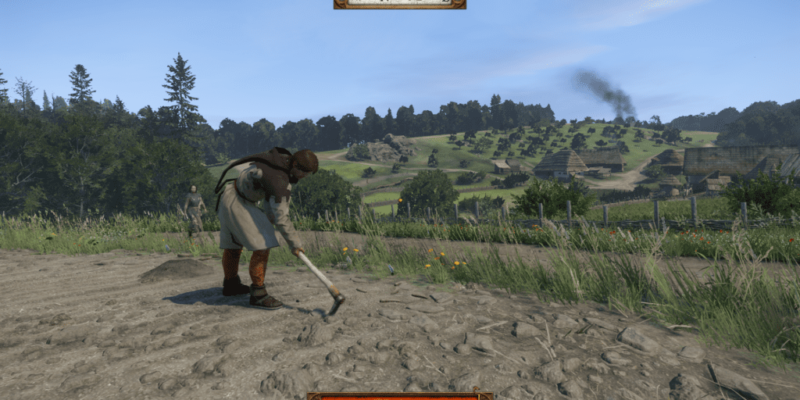 Those of you who read Rich’s interview with Warhorse Studios (or are just privy to what’s going on with Kingdom Come: Deliverance in general) will know that the game is currently being prepped for beta. As a precursor to that, the developer has been running a small “technical alpha” build. It’s there for the relevant tier of Kickstarter backers, but fortunate members of the press sometimes wind up getting to look at these things too.

When a game is in such an early stage of development it’s best to remain wary about reading too much into what’s on show. A lot will change. Many things could (and probably are) placeholders. You don’t so much get to see the game as the intent behind some of the mechanics and systems.

In the case of Kingdom Come: Deliverance, I was able to murder an old lady in some secluded woodland and get maimed in honourable sword combat by a drunken lech outside a tavern. Not a bad return for a brief jaunt in work-in-progress 15th century Bohemia. 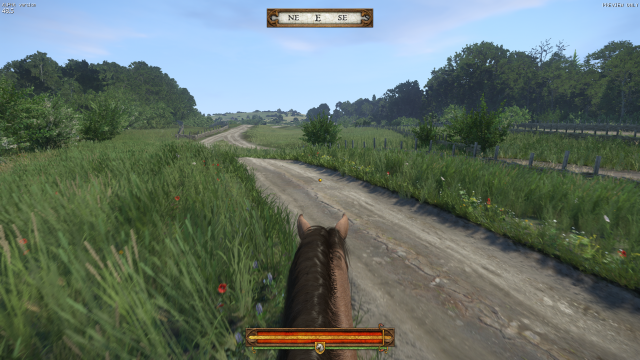 It does look rather calm and picturesque, doesn’t it?

Realism and period accuracy were very much the distinguishing factors in the Kickstarter for this open world RPG. Chimeras are out. Making sure your blade is kept sharp before you go wading into combat is in. As are promises of historically recreated buildings, decorative paintings, and even specific systems of criminal justice and commerce.

How much of that was on show in this alpha version is hard to say. I do have a history degree (no, I didn’t send away for it on the internet), but it’s mostly to do with the Soviet Union, so that doesn’t really help me confirm or deny whether the Kingdom Come farmers are using the correct types of hoe. In my hazy, medieval-ignorant mind, the villages and homesteads present in this early build reminded me of the more rural areas from games like Mount & Blade (an ahistorical title, but one which steers clear of dragons) or even The Witcher 3 (definitely more on the fantasy end of things).

Historical realism is always a risky thing to apply to what is, in general, the highly unrealistic world of videogames. Get in too deep, and you may end up with a laudably academic but probably deeply tedious game. Don’t go far enough, and you upset the hypothetical guy who threw in £2,000 because he was expecting every line of dialogue to have authentic 15th Century accents. 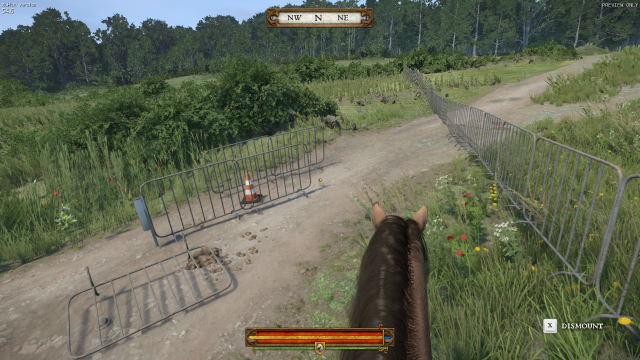 This is outrageous! I didn’t donate to see traffic co … oh, a JOKE you say. Very well then.

It’s a tough balance to find. What’s worth researching and including? When should game mechanics take precedence? This alpha release suggests that some of those questions have received answers, but perhaps not all of them.

Combat is definitely dangerous. A rowdy fellow at a nearby encampment of soldiers taught me the basics of swordplay, which involves using the mouse to guide your strikes at one of the five compass-point-like marks that appear on a foe. The left button aims a slash, while the right is a straightforward poking stab. Mixing up your rhythm in unorthodox combos seems to be the key to breaking through enemy defenses. It’s also possible to parry by timing a block just right, opening up an opponent to a quick strike. A stamina bar dictates how long you’re able to hold a block, or swing away without pause.

Aiming for specific zones isn’t terribly easy (perhaps by design) and the rather fluctuating frame-rate in this unfinished alpha build made parry timing a bit of a lottery, but the gist of combat was clear: don’t get involved unless you’re prepared. I spectacularly ignored this lesson by accosting a chap outside an inn who was leering at the passing ladies. My presumption that his drunken state might give me an edge unfortunately proved to be overly-optimistic, and though I was able to land a strike on him, he cut me down in a couple of blows. Jerk. 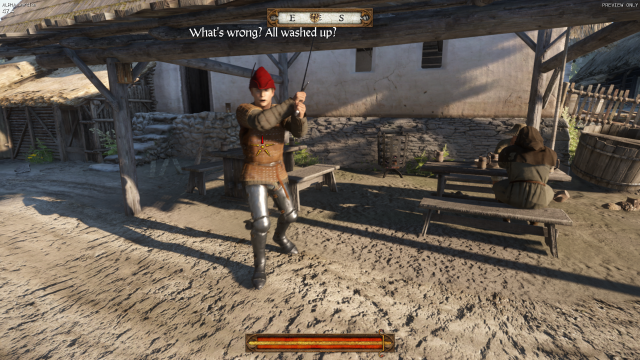 Screw you, and your armoured legs.

There’s no saving or loading function in Kingdom Come: Deliverance’s alpha (that I could find, anyway), so after restarting I went in search of some slightly safer questing. Thematically, the quests present in this build do seem to span that RPG/historically relevant spectrum. I had to find lost items (including an unruly sheep), sort out some property deed issues, and dig a grave.

What sticks out at present (presumably just because it’s a first pass at this stuff) are the voices and dialogues for said quests. The writing is currently littered with anachronisms and modern phrasing, while the voices seem to range between “totally flat” and “curious American drawl”. Mind you, the alpha also has metal crowd barriers and traffic cones around some of the walled off areas, so the writing is probably a placeholder joke too. At least, I hope that’s the case.

Mechanically, the quests worked quite well and even at this stage seemed to have a fair bit of built-in flexibility to them.

Tasked with fetching a cure from the local herbalist, I was faced with the annoying prospect of having to search around for the correct ingredients for her concoction. Alternatively, the beautiful woodland surroundings were a long way from any other dwellings. Definitely too far for the cries of somebody being hit repeatedly with a sword to travel. This horrible murder furnished me with the necessary antidote in no time at all, but may well have locked me out of a lesson in alchemy. With my potential teacher now dead, the alchemy bench mini-game became a daunting task. 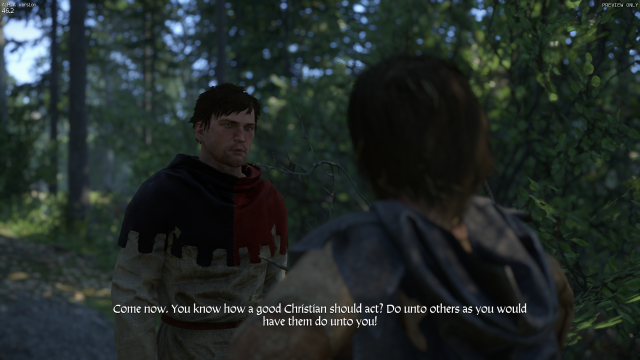 He says, before attacking her with a sword.

I also like the implication that my character may start out in the full game with basically nothing to his name. This alpha provides a magical horse (who, like Roach, can appear with a whistle), but I strongly suspect that’ll be something the player needs to work for in the finished release. Even in this alpha, I had to scratch around (and effectively ended up stealing) for a sword and bow. It reminded me of the brutal early game in Elite, and I’m sort of hoping that finding a decent blade in Kingdom Come: Deliverance will feel as much of an accomplishment as acquiring a quality ship in Frontier’s title.

Combat mechanics may not be finalised, but I already like the weight and import given to your blows. Sword-fighting here is not balletic, but nor does it just consist of robotic hacking. The intent is to make duels gritty, tense affairs, and I think Warhorse are part-way there.

I’m not the best person to judge the accuracy of the CryEngine rendered locales, but the atmosphere of a rural, 15th Century village in Europe is certainly coming together. Further passes at the dialogue and (hopefully) voice acting can help cement that even further. Basic quest design is in place, and has encouraging signs of offering multiple solutions. Successive beta releases will undoubtedly give a much clearer idea of where Kingdom Come: Deliverance is heading, but this alpha version contains glimpses of promise.