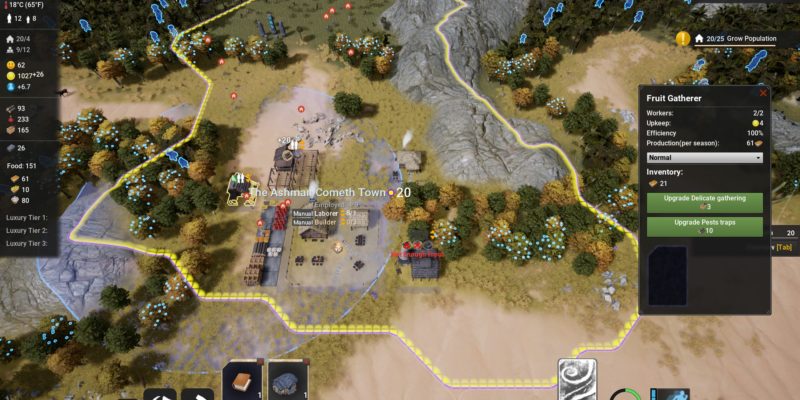 Kingdoms Reborn is a builder/sim (in Early Access) that’s all about creating an empire from practically nothing. If you’re at a bit of a loss regarding progression early on, this handy guide will help to get you started in Kingdoms Reborn. We will also go over some tips to point you in the right direction.

When you start a new game in Kingdoms Reborn, your only course of action is to choose a spot to start out. This, as you’re no doubt aware, is highly important. Your starting location decides what resources you have available. You will immediately want to make sure you’ve got access to wood and stone. Being able to mine coal and iron will also be quite helpful, but wood is really the most important resource for early buildings.

The first thing you’ll do upon picking your spot is place a townhall. This building will be instantly populated with a certain amount of people. The problem is that you’re not going to have any food. While winter will still be a ways away, it’ll still show up whether you’re ready or not. You need to plan.

Back in the village

Now that you have a townhall, you will need wood to get a food source set up. All you need to do is click the gathering icon on the bottom-left of the screen and then drag your cursor to highlight trees. Your available laborers will go and cut the trees down and then move them to storage. If you start running out of storage space, you can build more via the build icon right next to the gathering icon. I prefer to pick a mushroom farm as my first build, as they’re a great source of food, but you can also put up a hunting lodge or a building for fruit gathering. You can expand your territory by using gold or food, so if you make more food than you need, you can use it for expansion instead of using currency. You’re naturally going to want more land, as that means more resources and more space to build. You’ll also want to keep your citizens happy, so make sure you’ve got enough houses built. You can fit four people to a house and these can have their insulation upgraded with a small amount of stone, so it’s a good idea to install a quarry into the side of a nearby mountain. You’ll also want to build a tavern to supply more happiness to your citizens, as happier people have more children.

You’ll get new citizens through childbirth, sure, but you’ll definitely want to attract immigrants. For this, you will want to build an immigration center. Make sure to staff it properly in order to actually get this to work out. You can also add cards to your townhall to attract more immigrants. Each place of employment can have a certain number of employees that you can increase or decrease by highlighting them. Similarly, you can divvy up how many of your citizens you want to gather things and how many you want to build the construction projects you set up. As for winter, Kingdoms Reborn has a couple of ways to easily heat homes. You can either mine coal and use that, or if there isn’t any nearby, just make a charcoal building which will turn wood into charcoal, which works just as well. That way, you shouldn’t lose any citizens to the extreme temperatures. Make sure to also have some food stocked up. Also make sure to have houses within a certain distance of anything you build, as having them too far away will mean nobody will make the trip.

Kingdoms Reborn gives you blueprints for specialty buildings via cards that become available regularly. You can re-roll these for free the first time, and then it costs a small amount of gold for subsequent rerolls. If you don’t get a building you need, reroll for it. Of additional note, if you see a bunch of boxes somewhere on the map, claiming the territory they’re in can give you some good loot, such as resources. That’s it for this beginner’s guide, and you should be up and running in Kingdoms Reborn in no time.