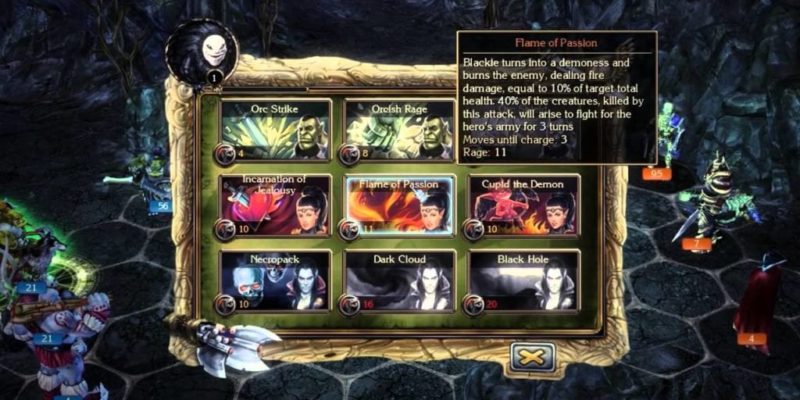 No, I don’t know why this screenshot and the press release spell his name differently.

1C Company’s latest entry in the King’s Bounty series, King’s Bounty: Dark Side, will be released on 14 August for $25.00 USD. The first King’s Bounty to be published by 1C Company (itself a re-imagining of the original 1990s title) was developed by Katauri Interactive.

I’m not sure whether Katauri are still involved in the series, because their name doesn’t appear anywhere in the press details or in the trailer (below.) Presumably, then, 1C Company has taken the development in-house.

The set-up for King’s Bounty: Dark Side is pretty straightforward. You know all those “evil” creatures like Vampires, Orcs and Demons you were slaying in previous Bounty games? Well, now you’re controlling those guys. That means a full roster of interesting creatures of darkness to use in the traditional turn-based battles.

Turns out though, the “light” armies are actually total dicks too. Each of the playable Orc, Demoness and Vampire characters have a suitably unfortunate back-story. Elves have been plundering Orc villages and massacring the innocent, forcing Orc warrior Baghyr to flee with a few followers. Demoness Neoleene is trying to fend off an invasion of human knights who may or may not have killed her father, while Daert the Vampire is being bothered by hunters.

“The heroes exchange vows and share antique artifacts, then gather their armies and march to fight for the very survival of their race.  They must unite against the Light or face extinction!” Kind of makes me feel bad about all the guys I killed in King’s Bounty: The Legend, really.