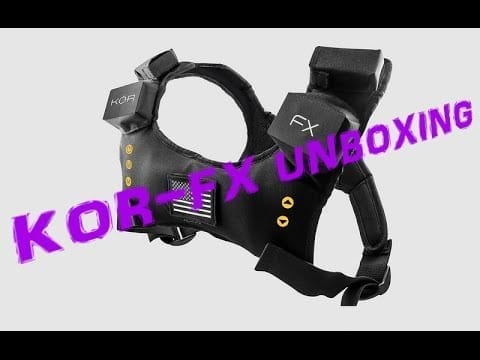 Disclaimer: A review sample of the KOR-FX was received for review purposes. The gaming accessory was tested across various game platforms, including PC, Xbox One and mobile devices.

The biggest thing on the market right now for gamers isn’t necessarily the games themselves, no. The real selling point and marketable avenue that companies are delving into is a concept. That concept: immersion.

For years the force-feedback controller feature has been refined in technology, delivering a translation to what player see on screen that can be felt with your hands. And, with the most recent advancements in technology offering full virtual reality, what more can be done to make you feel like you are indeed in the game? The answer may lie in your chest. Well, not in your chest–more like on it.

I’ve been watching the KOR-FX grow over the past couple of years. It has ventured down the path of Kickstarter, along with showings at places like Electronic Entertainment Expo (E3) and the Consumer Electronic Showcase (CES). However, one thing has stayed true to the accessory over the course of its development, and that is the unique thing that it brings to the table.

For those who are unfamiliar with the KOR-FX itself, the device produces what is essentially soundless bass. With that in mind, the overall goal is to deliver feedback on what is seen onscreen, providing a larger sense of immersion or presence. For example, a vehicle approaching to the side of you rumbles your right sensor as the engine grumbles near. Thus, the sounds are turned to feedback, with gunfire turning into tremblings across your chest and an emphasis on where the action is during play.

The age ranges that tried on the KOR-FX were both males and females, although it was primarily worn by me, and ranged from ages 10 to 30-years old. All participants were able to strap the vest on and fit to their respective body types. However, in terms of the female participants, the positioning of the feedback sensor delivers variations of comfortability based on anatomy.

The KOR-FX itself is very comfortable and lightweight. It is made to fit most body types and ranges. Each strap snaps in the back with press-down buttons, while Velcro holds secure in the front. The sensors can be felt across the front body panel of the vest, but there aren’t any offerred on the back. It wasn’t something that I was expecting, but I did find that the more I played, and the more game genres that I experienced, back sensors are something to be desired.

The yellow buttons on the front left of the vest are used for Syncing, Power, and the Filter. There are three steps to the filter, each changing feedback. The front right are your volume up and down. The part of the vest that faces you are where the sensors are, which are panel-like in their arrangement.

This shortfall was felt mostly in competitive first-person shooter matches such as Halo: The Master Chief Collection, Titanfall and Dirty Bomb. While my headset provided auditory feedback, I began to rely on the feeling of bulletspray to indicate direction of fire. However, with the speed of these multiplayer matches, the expectation for the vest to indicate direction often came to a halt. When making swift 180-degree turns or running up a flight of stairs, it was almost impossible to know where the fire was coming from.

And you can bet your soiled shorts, playing Resident Evil: Revelations 2 and The Evil Within are two games that seemed to benefit the most. If you don’t get startled playing survival-horror games, you might now. Evn if you are susceptible to cheep scares before, you surely will jump even more times as I did with the vest delivering notifying factors of enemies. Even with well-equipped characters like Barry Burton, there is an intensity unmatched through feeling the suspense.

There are seemingly endless uses for the KOR-FX. There are only really two pieces to the vest: the dongle box and the garment itself. On one side of the box you have an input for an auxiliary cable (3.5mm) as well as an output for one of the same size. Both sides are controlled by a scroll wheel for volume up and down. There is also a sync button and power. Syncing is virtually hassle free.

The box does require power. You can use the mini-USB cord that it came with or 4-AA batteries to power the base. The 4-AA are also used on the vest straps, but those are really the only ones required. So, in terms of simplifying the setup process, this delivers a ton of options for input and versatility of hardware that can be used with it. There is also a lengthy battery life chiming in at 30-40 hours. However, there wasn’t a noticeable sleep function, requiring me to change them a few times after leaving the vest on.

The battery bays are found in the upper compartments on the front of the vest. The back fits snug and comfortable with padding to support it.

In just the short time with the KOR-FX, I was able to plug it into my PC with my Turtle Beach X12 headset fully-functioning with it. I was also able to plug the device into my TV, playing with my Xbox One and still using my Turtle Beach XOFour’s. There are no limitations to voice chat based on the design, and I didn’t notice any fluctuation in sound quality when moving it across these platforms.

The best part about playing through all of these devices was the spectrum of media able to be “felt”. I listened and experienced the harrowing calls of a Tyrannosaurus Rex in “Jurassic Park”, felt jets sweep overhead in Dirty Bomb, and even embraced the sound of my own dying heartbeat in Crysis 2. While the thump of explosions isn’t as impactful as you might expect, there is a still a sense of direction based on the action of the game.

This was one of the only limitations to the set that I felt could have been improved upon. While I know there can be sensitivity to sound or even less hardware used to keep the production costs down, I did feel like the sound quality varied at times, even becoming distorted during more robust and orchestrated musical scores. There are scroll wheels on the wireless dongle and a three-step filter on the vest, so it is possible to find a “sweet-spot” within the given media. But, that is simply to avoid distortion.

Surprisingly, the racing and flight sim genre provided the most enjoyment. Even games like Rocket League were intensified as you felt the rush of your vehicle as if you were strapped into it yourself. The blaring sound of jet rockets are felt during games like Vector Thrust as you tear through the skies.

Hearing between the lines

After spending hours-upon-hours in the vest, I began to notice the little things. Navigating Xbox One menus allow you to feel various “pings” and “pops” when clicking tiles or responding to a message. The average player might not pay much attention to this, or even care about what a menu feels like. However, to someone that has a hearing disability, this could be the first time that they even experience this.

I listened and experienced the harrowing calls of a Tyrannosaurus Rex in “Jurassic Park”, felt jets sweep overhead in Dirty Bomb, and even embraced the sound of my own dying heartbeat in Crysis 2.

I tried turning down a few movies with only the caption on. It was a totally different experience watching action on screen, feeling it in the vest, and following along with the dialogue. You’d be surprised at the gravity that a simple scene can carry even without the full orchestrated sound blaring from your gaming headset or soundbar.

I couldn’t help but revisit the thought of gamers out there not even having access to something like the KOR-FX, delivering the experience of cinematic sound in a simple harness.

To be honest, I’m a little torn with the KOR-FX. On one hand, I’ve felt things in games and movies that I wouldn’t have noticed otherwise, changing my experience of those mediums altogether. There were rushes of thrust from air and land vehicles, and small indicators for simple things like navigating menus.

On the other hand, the device itself is slightly under-powered and could benefit from a smaller set of sensors in the back portion of the garment. Software is not included or needed, but the PC front could use some additional modifications or customization options.

There is something unique about the KOR-FX, something that I’ve felt all along. Its minimalistic in design, yet technical in the areas that it needs to be. I feel that it could benefit from another redesign, and the possibility of more power. Even with that said, it still fuels immersion and brings something different and new to the table. Even as I write this, I’m actually a bit sad to part ways.