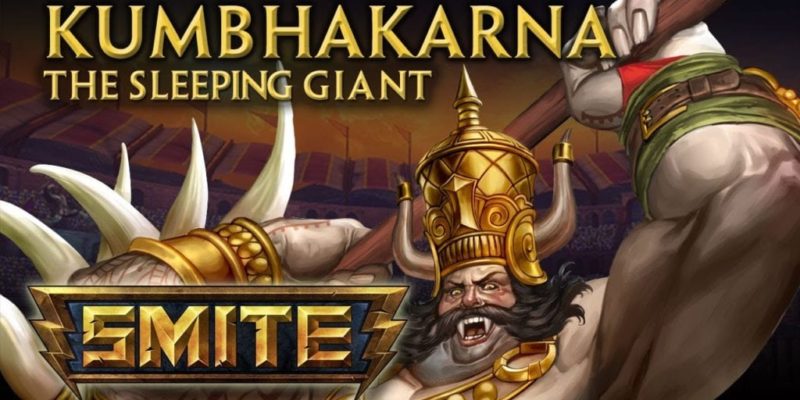 Hi-Rez Studios have revealed the next god coming to Smite: Kumbhakarna, the Sleeping Giant. He fits in with the rest of the roster by having a name that’s impossible to spell without concentrating.

As his title implies, most of Kumbhakarna’s abilities rely on the POWER OF DROWZINESS. His passive, Sleepy, means that he doesn’t die when he drops to zero health – he instead falls asleep, and will awaken a few seconds later at 25% health and mana. Unless he’s hit by a certain number of basic attacks, anyway.

Throw Back causes him to run forwards, half-asleep; if he hits an enemy god he stops and deals damage, and if he hits an enemy minion he hurls them backwards, dealing more damage. Groggy Strikes makes him slam his mace down, smiting – ho ho ho – and rooting all enemies in front of him. Mighty Yawn mesmerises all enemies in range; if awoken early, they’re slowed. Oh, and he can use that while asleep.

Finally , Kumbhakarna’s ultimate is Epic Uppercut. He charges forward and swings his mace upwards, knocking an enemy into the air. They land a second or two later, dealing area damage to enemies around the point of impact. Obviously, this can be used to set up combos with other gods – Epic Uppercut can set up Poseidon’s Kraken, for instance.

No idea when Kumbhakarna will be awakening to Smite, but I imagine it won’t be too long. You can check out his reveal video below, see what I thought of Smite over here, or try the game yourself – for free – over here.

4 ways Uncharted 4 can be awesome

GOG’s latest sale is a gladiatorial Battle of the Games

By Ben Kerry8 mins ago
News