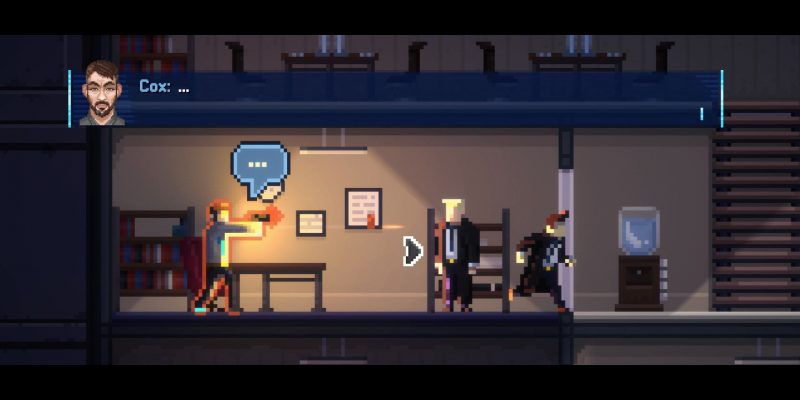 I don’t know what it is, but there’s just something about the Noir style. When Noir is applied to damn near about anything, it makes things infinitely better. Everything from the dark brooding narrative to the admittedly stereotypical saxophone bellow in the background just draws me in. As soon as I heard about the recently released Lacuna and its Noir-inspired vibe, I was in. Thankfully, once again, going with my gut hasn’t disappointed me.

Seemingly inspired by the pixelized presentation that is all the rage in the indie space as of late, Lacuna is a beautiful, atmospheric look into the future that is worlds away from Earth. Once you get past the oddly structured and delivered tutorial, this point-and-click adventure places you firmly in the trench coat of a guy named Neil Conrad. Neil works for what appears to be a futuristic version of the FBI, named the CDI. Tasked with the protection of a visiting dignitary, I’m sure you can imagine where this is going. It doesn’t take long for the VIP to bite the dust, and there is where the rubber starts to hit the road.

Picking up the pieces

As the world reels from the demise of this important leader, protecting an already tenuous peace with other systems becomes paramount. To prevent things from getting out of hand, the murder needs to be solved, and quickly. Little did I know that this would end up being far more than just a simple homicide investigation. 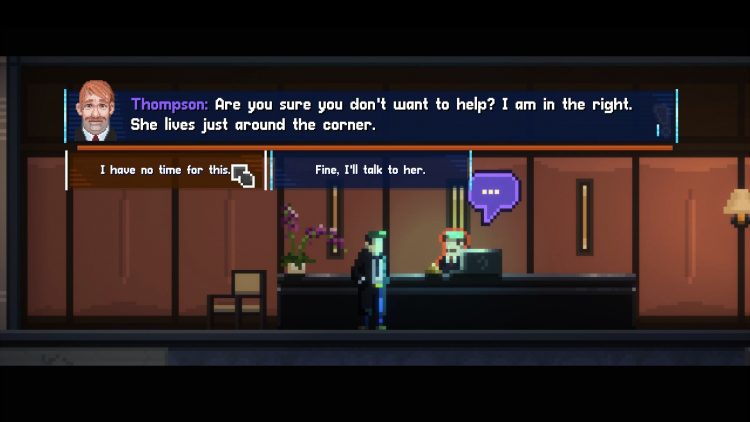 Throughout the narrative, you will get countless opportunities to converse with the locals. Conversations include everyone from suspects to fellow CDI members, and an ex-wife mixed in just for giggles. Thankfully, every conversation is recorded in text logs for later reference, because there was a lot of narrative shoved my way. It was downright overwhelming. At numerous points in an investigation, you have to fill out sheets that describe the current scenario under supervision, and the findings of said research.

At some point, early in my playthrough, I decided to experiment with being the most inept detective in history. This decision was primarily a side effect of getting the first major investigation wrong and realizing that other characters would save my ass anyway. As such, from that point forward, each time I was asked to file one of the findings sheets I would purposely submit with incorrect answers. And before you ask, no, this isn’t to cover the fact that I’m really bad at the game.

What I ended up discovering was that you can fail your way through a vast majority of the storyline, with very little consequence. Honestly, I was a bit surprised that it was as friendly toward my ineptitude, and didn’t just halt my progress at one point. Late in my playthrough, there was finally a point where my dipshittery wasn’t tolerated anymore, but I didn’t know that was the case until it was too late. 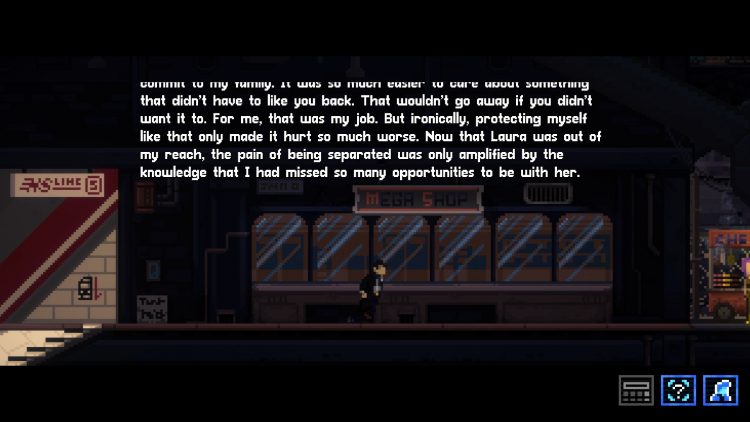 One aspect of the design that I had a love/hate relationship with was the save system. To put it bluntly, you have no control over saving whatsoever. Saving manifests itself in a checkpoint system that will periodically record your progress after a critical decision. Due to the inability to manage saves in Lacuna, you are completely locked out from exploring other narrative paths in a single playthrough. From a player’s perspective, I liked that it took this completely out of my control. On the other hand, this did mean that I needed to keenly keep an eye on when saves would occur so that no substantial progress was lost. Additionally, and least from a reviewer’s perspective, this was a goddamn nightmare since it meant I would need to start a whole new playthrough to encounter specific story elements again.

Like I mentioned earlier, I genuinely adored the noir-inspired presentation and gritty story. You encounter hookers, drugs, murder, and plenty of f-bombs, and that is just in the first hour. Inhabiting this nasty world seems like it wouldn’t be easy, especially for those that are less affluent. Luckily Neil is there to once again tap into the noir approach, and delivers fully voiced internal monologues. Actually, this is the only time that there is any voice acting whatsoever, and the devs knocked it out of the park.

Probably the least clear aspect of Lacuna, in general, are the investigations. That’s not to say they were terrible. These scenes were just a bit unwieldy for my liking. If you have the outline mode engaged, which highlights observable elements in the environment and citizens you can interview, it becomes fairly straightforward to gather evidence. The problem was, there were frequently scenarios where I wouldn’t be able to submit an investigation worksheet because the game knew there was a missing a piece of evidence. I easily spent an extra hour at times going on wild goose chases, trying to track down specific objects or testimonies. It was fucking infuriating. 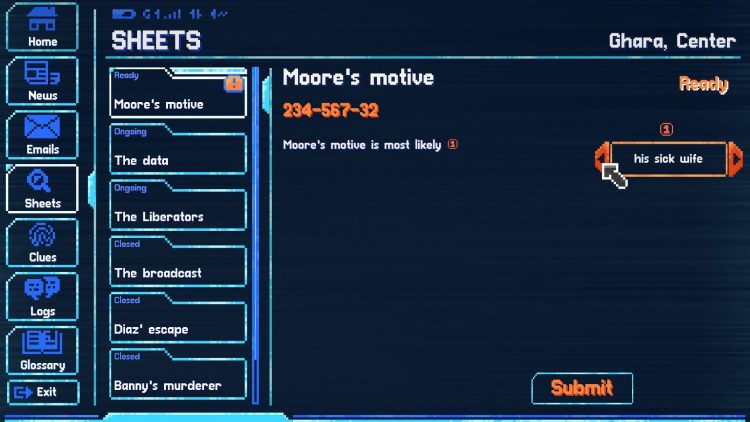 Once my frustrations had boiled over and returned to normal, I would return to enjoying Lacuna’s sprawling map, interesting complementary characters, and chill vibe. My rather abrupt end to the campaign (completely of my own design) was the single down point for the storyline as a whole. Nothing says, “you done fucked up,” like learning that virtually every aspect of Neil’s life has been irreparably harmed by my ill-advised actions. That said, I applaud the developers for giving me enough rope to hang myself. I can’t wait to take another run through the campaign, just to see what it looks like when you aren’t intentionally trying to be a dumbass.

I went into Lacuna with fairly high expectations and it didn’t disappoint. Everything from the art style to the engaging story arc and compelling characters kept me wanting more. If you can get past having no control of your saves and occasional investigation irritations, you will be in for a genuine treat. It doesn’t take a gumshoe to see this is a case worth taking.

It doesn't take a gumshoe to tell that Lacuna is a stellar, Noir-inspired adventure, that is absolutely worth investigating further. Other than a few quality of life tweaks, it's hard to find much wrong with this narrative-driven hunt and click. Be sure not to let this suspect slip through your fingers.

Genshin Impact version 1.6 will have Kazuha and summer outfits