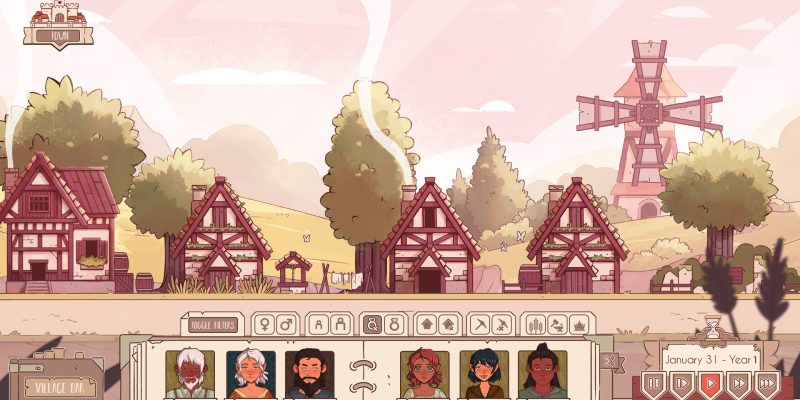 There has been a steady increase lately of games with more chill vibes than we normally see. It seems that developers, as well as players, have a desire for more laid-back games that don’t involve combat. At the PC Gaming Show we got to see the world premiere trailer for Lakeburg Legacies, which continues this ongoing trend.

The game is described as The Sims meets Crusader Kings. The game is a lite management sim that has you build a kingdom from the ground up. Assigning workers, building new structures, and the like. But what separates this game apart that you can see in the Lakeburg Legacies trailer, is a heavy focus on interpersonal relationships. The game also features hand-drawn artwork for every character.

In most sim games the player maintains a view above the world they’re creating. But in Lakeburg Legacies players interact with the lives of their kingdom’s inhabitants. You can even pair certain villagers together and have them get married, including same-sex couples as is seen in the trailer. Your villagers can even produce children that will carry on their quirks and personality.

On top of that, everything in the game is procedurally generated. Each new playthrough will have a new set of townsfolks and new events that will happen in the kingdom. These events will force players to make decisions that can either benefit or even ruin their kingdom. They can even occur on a personal level, throwing the love lives of the characters into chaos.

The game is being developed by French developer Ishtar Games and is their first self-published title. Their last project was the tactical roguelite RPG The Last Spell. So Lakeburg Legacies is definitely a departure from their previous work. The game does not currently have a release date beyond “2022,” but you can wishlist it now on Steam.