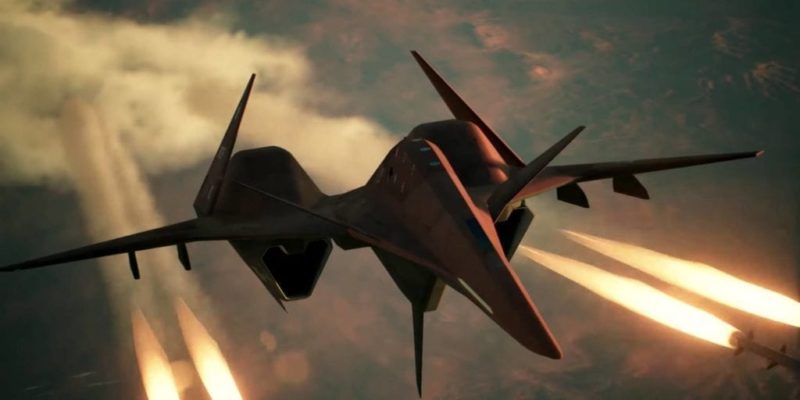 Ace Combat 7: Skies Unknown has received its latest DLC pack, adding the second of three DLC aircraft. As of now, Bandai Namco has given no confirmed release date for the three DLC maps. For those who like their aircraft futuristic and strapped with lasers, though, this DLC should provide some holdover while we wait on the new missions.

The aircraft on offer is the ADF-01 FALKEN, which made its first appearance in Ace Combat 2. This aircraft, along with the other two DLC aircraft, are original designs rather than licensed, real-world aircraft. Those who purchased the season pass will receive the content pack for free. Aside from the FALKEN, the pack also includes seven skins and four emblems. The package can be purchased individually as well as apart of the season pass.

The ADF-01 will feature three special weapons. The Tactical Laser System (TLS) is a single-beam laser that deals serious damage, but it requires some accuracy. Unlike many of the missile-type special weapons, the TLS has no homing capabilities. The Four Target Air to Air Missile (4AAM) launches four individual homing missiles at once. The player has the option to launch all four missiles at a single aircraft or to spread the missiles out over various targeted aircraft.

Finally, the Fuel-Air Explosive Bomb (FAEB) is for those who love some serious pyrotechnics. The bomb launches a highly flammable fuel type over a large area, offering the ability to destroy several ground targets at once. Despite the fact that the FALKEN contains a bomb-type special weapon, its role is still listed as a fighter on the aircraft tree.

Ace Combat 7 updates have been slow but steady

Post-launch content has arrived at a slow but steady pace thus far. The first of Ace Combat 7‘s three DLC aircraft came in the form of the ADF-11F RAVEN last month. The RAVEN is also a futuristic/prototype fighter with a similar design and weapon set to the FALKEN.

Personally, I’ve always been more of a fan of real-world aircraft. The Cold War-era Soviet planes have such a unique, boxy design. Also, the F-14 Tomcat holds a special place in my heart, and I have Top Gun to thank for that. Aside from the newly released aircraft, Bandai Namco also revealed in May that Thrustmaster Joysticks can now be used with Ace Combat 7.

Some fans of the game were not excited that there was no co-operative gameplay, myself included. I was a regular player on Ace Combat: Infinity, despite the fact that I didn’t jive with its pay-to-level-up system. Aside from that, Infinity offered an immersive, competitive co-op mode, where players would team up into two squads to see which squad could take out the most AI.

While the online portion of Ace Combat 7 is good, it doesn’t live up to the co-op offered in Infinity. I’m still holding out hope that either one of the three DLC maps will offer co-operative online play. If we’re lucky, maybe Bandai Namco will announce a sequel to Infinity with a PC release.

The Blackout Club visits your neighborhood this July