Lawbreakers is struggling, there’s no denying that fact. Currently, there are around two to three hundred concurrent players playing Boss Key’s shooter every day. Simply put, it’s probably not what CliffyB was expecting.

There are numerous reasons Lawbreakers has not managed to catch on; terrible marketing, characters that feel soulless, a high skill level requirement, and game modes that are really nothing special. The frustrating thing is the game has potential, but a combination of all these factors has prevented it from making a real mark. Oh, and let’s not forget the fact that there’s an abundance of team shooters kicking around.

Observers will be wondering when Boss Key will bite the bullet and make Lawbreakers free to play, but that doesn’t appear to be part of their immediate future plans. Like Gearbox and Battleborn, Boss Key will be holding out as long as possible probably hoping that some Overwatch type miracle will happen.

Since launch, Boss Key has been busy planning this year’s Lawbreakers content schedule, ignoring the fact that there really are not that many playing it. Last week they teased their plan. It includes new features such as skirmishes, two new maps, a ranked mode, a new class and “more”. The idea of adding a ranked mode is great in principle, but until they manage to bring players back to the game it’s not a great idea. Adding a couple of new maps will keep current players amused for a time but it’s going to take more than this to turn it around. 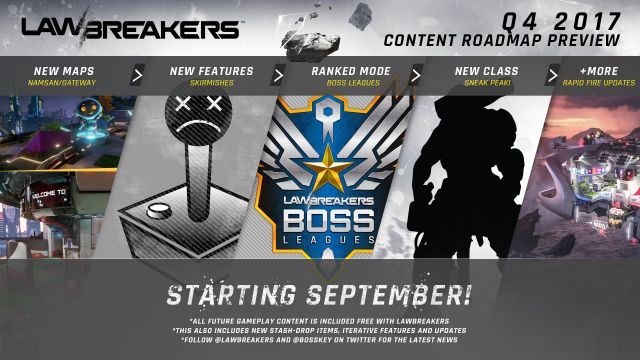 Having played Lawbreakers a little in beta and when it launched, the one thing that struck me is there’s a disconnect with the characters. There’s a reason Blizzard invest time in making animated shorts and create ARGs, they want to connect with their audience. While these have zero impact on how the game actually plays, they do engage the audience. Overwatch is a competent shooter but it’s nothing really mechanically special or original when you examine it. It’s the characters that are making Overwatch a success.

My reflexes are not what they used to be in my Quake days 20 years ago, and I’m no ultra-pro when it comes to FPS games. So I can see that Lawbreakers can be a tough nut to crack for some players. It can be damn fast, and being shot after 20 seconds of play continuously is not that enjoyable. Yes, I am crap at shooters in my older age. That’s not a criticism of the game by any means, but it shows that it’s tailored to a very specific, fast-reflexed audience. Compare that to Overwatch where I can get a decent game and feel less frustrated, even without playing it much.

Boss Key could shunt Lawbreakers over to a free to play model, but according to Steam Spy stats, around 60,000 people have picked the game up. That’s a fair base to work from. The challenge for Boss Key is how they encourage these players back to get from those two hundred concurrent player numbers to something a lot more substantial. Going free to play sounds like the easy option, moving to that model helped games such as Evolve, but there’s no guarantee that would happen with Lawbreakers.

If they make that switch there would be no going back. It’s worth remembering that while Evolve got a short-term boost to numbers, 2K still shut the game down. 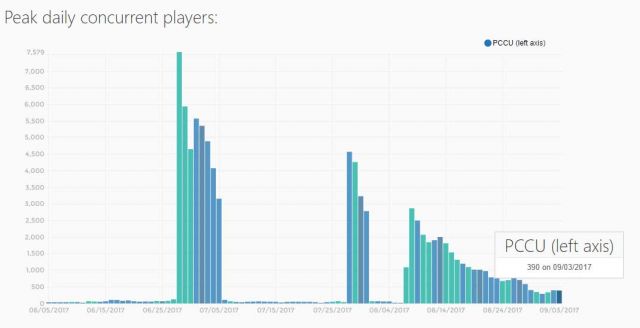 Listening to Cliff Bleszinski talk about the game pre-launch he was convinced that Lawbreakers would reach the hardcore audience saying that he “wanted it to be the rated R version of all these PG rated shooters”. The problem is, the game doesn’t come across like that at all. He was also keen to tout the “gravity defying combat”, which is in the game, but is it really that important? Is it a game-changer? Probably not. Earlier this year, at GDC, Cliff Bleszinski explained how they were trying to approach the release in a crowded shooter market.

Being constantly compared to the current slew of colourful shooters on the market made us realise we needed to stand out from the crowd. We decided to take a step back and explore how we could dial up the maturity in Lawbreakers, going back to our original vision. The new look and feel embraces the innovative and vertical nature of our game elevated by violence, intensity and competition.

He has also stated that finding a marketing partner that “markets the shit out of it and you’d have a success”. With Nexon looking after the game that was unlikely to happen, and was apparently one of the reasons Splash Damage took back control of their free to play Dirty Bomb from that company. There was cash put behind the marketing. ‘Influencers’ and press were given hands-on time, but you have to take much of that coverage with a pinch of salt. When there are free trips and cash being exchanged for coverage, opinions are never that reliable. It’s still a big problem in this industry.

It’s apparent that there has been some less than brilliant business and design decisions when it comes to Lawbreakers but Boss Key have little else to lose now. They have to see this out and hope they can reinvigorate that existing audience. Or they can give in and move to a free to play model which, ironically, was their original plan.

With Boss Key revealing more details of their planned 2017 free updates this week, they will be hoping to get your attention. But perhaps it’s just too late.

Midair Preview – One of the Tribes