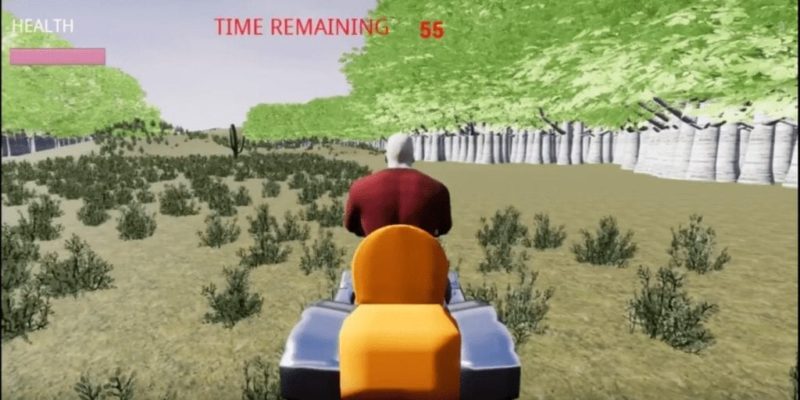 Every now and again I come across games that pique my interest for a variety of reasons. Some look like the exact thing I’d like to spend my time on. Others look like they have no reason whatsoever to exist but absolutely need to be played regardless. Lawnmower Game 2: Drifter was definitely one of the latter.

Upon learning of Lawnmower Game 2‘s existence, questions filled my mind. Why would someone make this? Who is this supposed to be for? Whose pants am I wearing and why is that dog chasing me? I absolutely had to see what the game was all about. I contacted someone from one of my Steam groups and paid the high price of $0.10 to find out.

What Am I Even Looking At?

As one might expect from a 3D game with no budget, Lawnmower Game 2 looks bad. The visuals are bland, the old guy on the lawnmower is barely detailed, and absolutely every aspect of its design is lacking. I was overjoyed. From the cheap-looking speedometer to the sounds of the lawnmower, everything reeked of a slapped-together, lazy affair. You can even drive in the river! 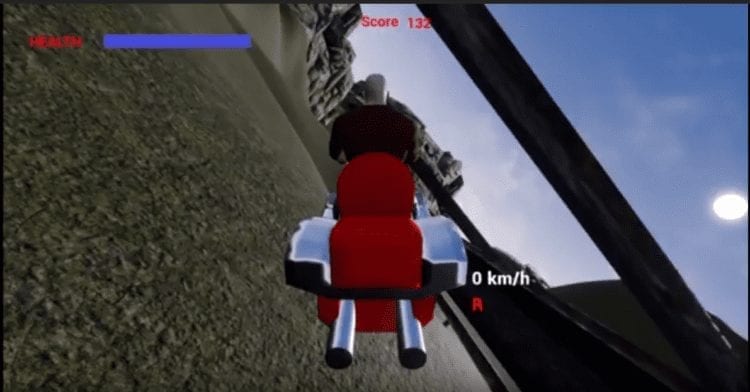 I wasn’t expecting a lot from the gameplay either, obviously. But it’s a game about a lawnmower, so I figured that game would structure itself. You’d start and immediately begin a campaign where you mowed grass with a time limit. The faster you finish, the more money you make for the job. You then use said money to upgrade your lawnmower or give your old guy a new pair of overalls or a straw hat as you move onto bigger, badder fields of grass.

That’s what I expected, but Lawnmower Game 2 does not do this. Instead, it drops you in a map and that’s it. There’s grass to mow, and your score increases as you do so. But the score does nothing. Much like the existence of the game itself, the score is absolutely pointless. There’s nothing to do but drive and mow grass. The map isn’t exactly large, either, and all of the available grass takes about 45 minutes to cut.

Normally, I would not have chosen to cut every single piece of grass, but I was intrigued. What if something cool awaited me once I’d cut all the grass? Maybe the developer of this rancid abomination had another trick up their sleeve. Maybe those rice cakes I had earlier were partially made of cornmeal and that’s what my stomach ache was all about. 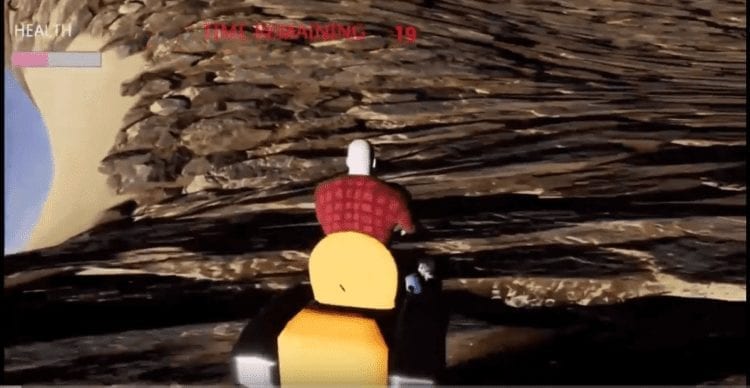 So, what happens when you cut all the grass? Why you get the ultimate prize: all of the grass grows back and you can do it all over again. What fun! Who could possibly resist doing this pointless exercise a second time? I promptly quit back to the game’s extremely terrible main menu. As luck would have it, there was even more content awaiting me.

I was curious to see what other lawnmowing adventures awaited me and my decrepit, lawnmowing sidekick. What was the rest of the game comprised of? You guessed it: time trials and checkpoint races! That’s right, somebody made a game about a lawnmower and decided that racing it around horribly designed environments was more important than doing the literal only thing a lawnmower is designed for.

There aren’t many races available. The time trial is just driving around a few laps while the game counts your time. The checkpoint races just involve driving through, real shocker, checkpoints. Surprisingly, each race has its own new map. The devs could design entirely new maps to clunkily race around in, but more than one map in which to cut grass? Madness!

And some of the races are strangely hard. The lawnmower controls terribly and handles even worse. Racing it around only increases the inescapable tedium that began to bore its way into my core. Yeah, yeah, what was I expecting? A game called Lawnmower Game 2 to have good lawnmowers?

So Why Give Lawnmower Game 2 Its Own Article?

Because even though I only put about an hour into it and it was a truly abysmal experience, I don’t think I’ll be forgetting it any time soon. While the gameplay was terrible and a mostly empty affair, it gave me some good laughs. Anyone who likes to experience truly awful games, then laugh at and ridicule them with friends who don’t understand why you would even bother can probably find something amusing about Lawnmower Game 2.

I also have no idea why this game has the subtitle “Drifter“. The old man doesn’t appear to be a drifter. The lawnmower doesn’t drift. You can’t park the lawnmower on a raft in the middle of a river and drift away, lost in thought and lost to the world. The devs just seem to have tacked a random word onto the title. And you know what? I respect that. I love things that are asinine.

The biggest remaining question on my mind, however, is this: when can we expect Lawnmower Game 3? Will it finally be a game where you actually work as a lawn man? Or will it just be more races that absolutely nobody asked for? It’s worth mentioning that even the developers have abandoned this game and instead suggest that people buy the first Lawnmower Game. If that isn’t a vote of confidence, then I don’t know what is.