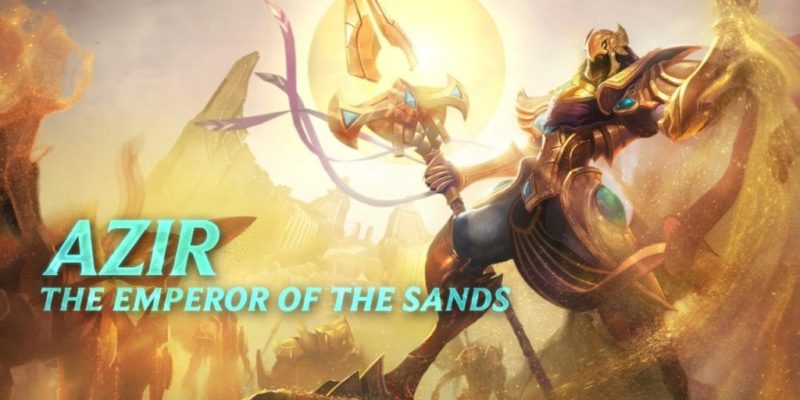 Riot have put their spotlight on a forthcoming League of Legends Champion: Azir, Emperor of the Sands.

Azir is a mid-lane mage with a focus on summoning and controlling an army of sand soldiers, which he can then use to divide or destroy his opponents.

Azir apparently has two passives. The first, Will of the Emperor, gives Azir bonus attack speed based on his cooldown reduction. The second – which the video then claims is actually an active – is Disc of the Sun, which lets Azir create a sun disc on the base of a destroyed turret. The sun disc lasts a full minute and targets enemies just like a regular turret, although if destroyed, it will grant gold to the enemies. If Azir wanders too far away from it, it’ll lose a huge amount of armour and can then be easily taken down even by minions. However, it can be built on any turret base barring the enemy’s Inhibitor and Nexus turrets – which means you can use it on the enemy’s destroyed turrets to cover your advance when pressing further into their territory.

So, his actual abilities. The only one he can learn at level one is his W, Arise!, which summons an “untargetable memory” of a soldier, which grants vision and then waits for commands, but fades relatively quickly. If a sand soldier is in range to attack an enemy, then Azir’s auto-attack has the soldier attack instead. They get the benefit of Azir’s attack speed bonuses, their damage scales with the ability power, and their attacks pierce enemies – but multiple soldiers hitting the same target will do reduced damage, and they’re so terrified of enemy turrets that they refuse to attack them, and will disappear faster if one’s nearby. Nonetheless, they give Azir increased attack range and a few unique advantages.

Azir’s Q is Conquering Sands, which has every sand soldier charge to the target location – and charging soldiers slow and damage each target they pass through. As such, this simultaneously gives Azir the ability to reposition his soldiers, as well as applying a slow and doing some damage.

Azir’s E, Shifting Sands, is basically the opposite. This lets Azir dash to a target soldier, damaging and knocking up enemies encountered along the way. If he collides with an enemy Champion, then he also stops in place and gets a temporary shield. Spells can still be used while dash, which means that you can reposition your soldiers mid-dash without changing where your dash will stop. And yes, this lets you pass through walls and over barriers. It’s useful both for dodging spells and fleeing from enemies, and for chasing down retreating foes.

Finally, there’s his ultimate: Emperor’s Divide. This summons a wall of shield-bearing soldiers that charge in a target direction, damaging and knocking back enemies. They don’t take orders, but they do stick around for awhile, effectively letting you create an extra wall on the battlefield – but only for foes. Crucially, while enemies can’t pass through them, Azir and his teammates can, and they get a speed boost in the process.

So, that’s Azir. I’m not going to pretend I totally understand all of this because unfortunately I’m not much of a League of Legends player, but you can get all the details (plus suggested tricks and tactics) in the Champion Spotlight video below or over on his official page.