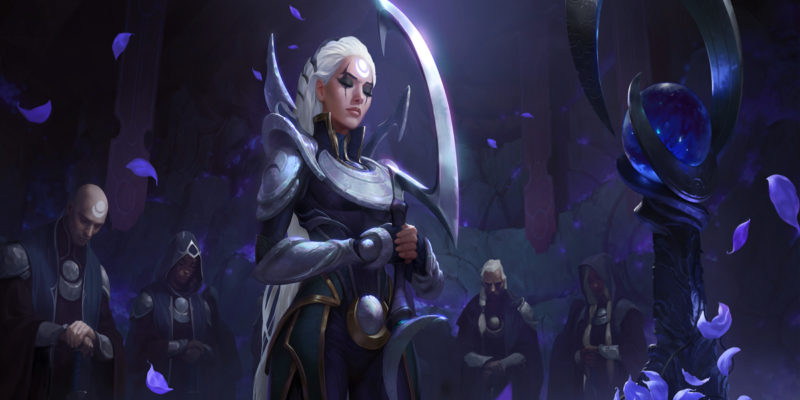 The Call of the Mountain expansion is only a few days away, but previews aren’t over just yet. A couple of days ago we got a look at the new Legends of Runeterra champion Diana and her support, which we will go over here in detail.

Diana is the champion of the Lunari archetype, which we covered last week. She is a 2 drop with 2/2 and Quick Attack. Her effect reads, “Nightfall: Give me Challenger this round,” and she levels up after 4 or more Nightfall effects are activated. Her leveled up form is a 3/3, also with Quick Attack, and the effect “Nightfall or when you activate another Nightfall: Give me +2/+0 and Challenger this round.” Diana seems to be a well-rounded champion with a very straight forward ability. Her leveled up form is simply just a more powerful version of her regular form, and since Nightfall can be activated multiple times per turn, she can become very powerful very quickly.

Her Champion Spell is “Diana’s Pale Cascade,” a 2 drop burst spell with the effect “Give an ally +2/+1 this round. Shuffle a Diana into your deck. Nightfall: Draw 1.”A very good buff spell for only 2 mana that replaces itself. While this card is not crucial to a Nightfall strategy, it does provide some good benefits relative to its cost. If it cost 3 mana instead, it would be much worse.

Unlike the last couple of champions, Diana comes with a unit in her support as well as two spells. Her unit support is Cygnus the Moonstalker, who has a 6 drop with 4/2 and “Nightfall: Give me and an ally Elusive this round.” This effect is very, VERY powerful. Being able to give himself and an ally, for example, a super buffed up Diana, the ability to strike the opponent’s Nexus directly is extremely good and well worth the unit’s steep 6 mana cost. Ionia and Targon continue to look like very impressive region combos in the upcoming meta.

Poro Cannon is a 0 drop burst speed spell that says, “To play, discard 1, Create two ‘Daring Poros‘ in hand.” Being able to create two 1 drop Elusive units for 0 mana is good by itself; however, combine that with the high number of good buff spells in Targon, as well as cards like Cygnus, and it becomes clear how powerful and overwhelming a board of strong Elusive units is with the Targon region.

Diana’s last spell, and a slightly controversial one at that, is Hush. A 3 drop burst speed spell that says, “Silence a unit this round. Create a ‘Fleeting’ Hush in hand.” Hush is able to stop cards like Anivia dead in their tracks by preventing them from resurrecting, but it can also stop defensive pieces on your opponent’s board from halting your offense. Also, being a burst speed spell, it becomes extremely powerful on defense as well, as it can stop an opponent’s elusive units and other units with strong offensive capabilities. 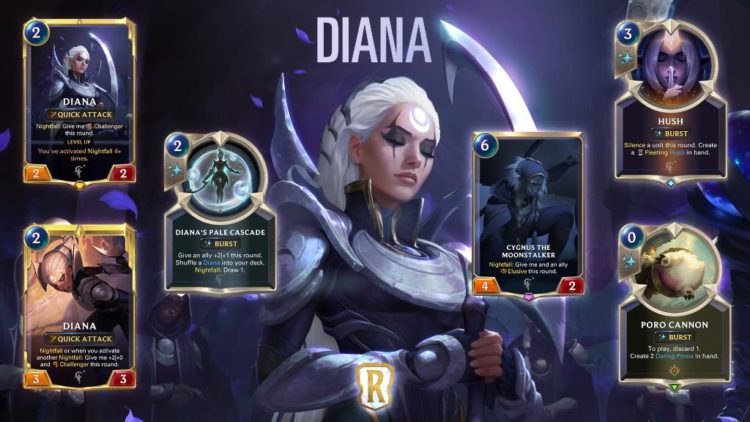 Never running from a real fight

Remember, Hush is able to target champion cards as well as normal units. While I don’t think it will become as prevalent as some online seem to think, I suspect every Targon deck worth its salt will run at least one or two copies. Because of this, everyone facing a Targon matchup will have to keep this in mind, especially if the opponent has a full 3 spell mana available. The effect does only last for the round, however, and the second Hush created in hand is something that could be potentially useful, but it is a lot to dump 6 mana into.

The Call of the Mountain expansion drops in two days on August 26. Then you will be able to add the new Legends of Runeterra champion Diana to your deck, as well as the rest of the great cards revealed so far.