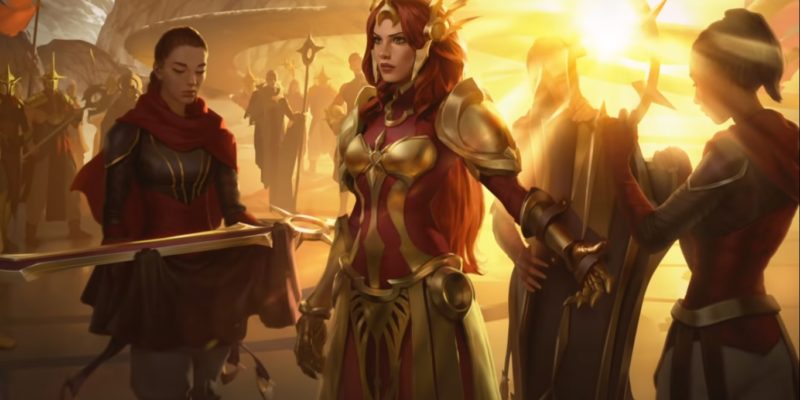 Previews for the Call of the Mountain expansion for Legends of Runeterra keep trucking along. A few days ago we got a look at Nocturne and the Nightfall ability. Well, with the darkness comes the light, as today we get a brand new champion and an ability that is the complete inverse of Nocturne and Nightfall. So without further ado, let’s take a look at the newest Legends of Runeterra champion: Leona and the Daybreak ability.

First off, what is the Daybreak ability? Well, Nightfall grants bonuses to cards that are not played first during the round. So Daybreak is the complete opposite. It gives bonuses to cards that are played first in the round. Before Leona’s full reveal today, we got a look at four cards with the Daybreak ability. First up is Solari Soldier, a 1 drop with 2/2 and the ability: “Daybreak: Give me +1/+1 this round.” This is great support for Daybreak and an easy four of in any deck running Daybreak support.

Next is Solari Shieldbreaker, a 2 drop with 3/2 and the ability “Daybreak: Give me +0/+4 this round.” Daybreak cards remind me a lot of white soldiers in Magic: The Gathering. Both white soldiers in Magic and this new Legends of Runeterra champion Leona, as well as her support, revolve around supporting and buffing lower-cost cards, with a handful of big cards that have devastating effects when they hit the board. Speaking of big cards with devastating effects…

The Solari devote themselves to the sun—and are blessed by its light. New Keyword—Daybreak: Bonus if this is the first card you play in a round. pic.twitter.com/LyrZhRcr0x

Our next Daybreak card is Sun Guardian, a 6 drop 4/3 with the Overwhelm ability and an effect that reads “Daybreak: Give me +4/+4 this round.” So if Sun Guardian is played first in the round, it immediately becomes an 8/7 beatstick with Overwhelm that can steamroll your opponent. This is a fantastic late-game card that can easily close out games. Lastly, we have Rahvun, Daylight’s Spear, a 5 drop with 5/5, and the ability “Daybreak: Create a random Daybreak card in hand. It’s always Day for us.”

Now “It’s always Day for us” could have several meanings, and we aren’t exactly sure what it means yet. If I had to guess though, I would say that it means Daybreak abilities can activate even if cards aren’t played first during the turn. The reason being that without an effect like this, Daybreak cards are automatically less powerful than Nightfall. You can play multiple cards per turn and they can all be “not the first card” in the round. But you can only have one “first card in the round” at any one time. An ability like this would really help Daybreak cards keep up their momentum and keep the buffs pumping.

Having multiple Daybreak abilities is also great for the new champion card, Leona. Leona is a 4 drop champion with 3/5 and the ability “Daybreak: Stun the strongest enemy.” She levels up when you have activated 4 Daybreak abilities during the game. This should be very easy to achieve, especially with Rahvun on the field (if he works the way we think he does). When leveled up, she becomes a 4/6 with the ability “Daybreak or when you activate another Daybreak: Stun the strongest enemy.” There is nothing to indicate that Leona’s ability is once per turn so it could be possible to stun your opponent’s entire board and leave them wide open for attack.

When the day breaks, so shall the heretics. pic.twitter.com/cr7TMI5suo

Unleash the power of the sun!

Leona’s champion spell is “Leona’s Morning Light,” one of the few slow speed spells we have seen so far in this expansion. It costs 5 mana and gives your allies +2/+2 this round. It also shuffles a Leona into your deck like all champion spells. In addition, it has “Daybreak: Activate all ally Daybreak effects at once.” This card is insane and justifies being a slow speed spell. Being able to trigger, or re-trigger, your entire board’s Daybreak effects is the ultimate game-ender and can completely overrun your opponent in the late game.

Leona’s champion spell is so good that it could be worth double-dipping your regions and adding cards like Entreat. In fact, Freljord is a great support region for the Daybreak support anyway. Between Daybreak’s stun and Freljord’s freeze abilities, you could make a great control deck that controls the opponent’s board and cuts off their defensive and offensive options.

Just like with Nocturne, the rest of Leona’s support is all spell-based. First, we have Zenith Blade, a 3 drop slow speed spell that grants an ally +1/+2 and Overwhelm. It also has a Daybreak effect that reads “Draw a Zenith Blade.” Again, slow speed spells need to be powerful to justify the fact that they can be interrupted, and even at 3 mana, Zenith Blade definitely meets that requirement. Using this card first means that at 6 mana your allies will have access to +2/+4 and Overwhelm for two different units. 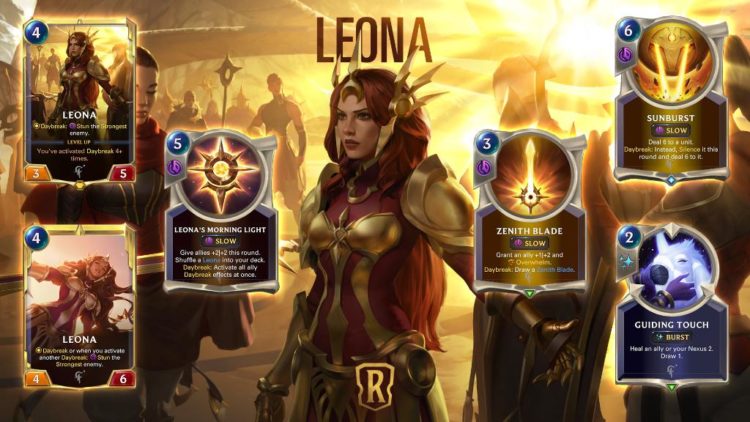 A bright day ahead for Targon

Guiding Touch is a 2 drop burst speed spell and Leona’s only non-slow speed spell. It heals an ally or your Nexus 2 and lets you draw 1 card. Nothing crazy or fancy, but a decent support card for 2 mana. However, I feel you have better plays for 2 mana than this. Leona’s last spell is Sunburst, a 6 drop slow speed spell that deals 6 damage to a unit. This card reminds me a lot of Holy Awe from Duel Masters (yes, I am old I am aware). Sunburst also has a Daybreak effect that, if it triggers, instead silences a unit and then deals 6 damage to it. Which is a fantastic ability that can prevent abilities like Last Breath, ensuring that you get the KO with no drawbacks.

Leona and the Daybreak abilities look very powerful and a very thematic counterpoint to Nightfall. I love the interaction between the cards and can’t wait to see them in action. Which you will be able to do when The Call of the Mountain expansion and the newest Legends of Runeterra champion Leona release next week on August 26.