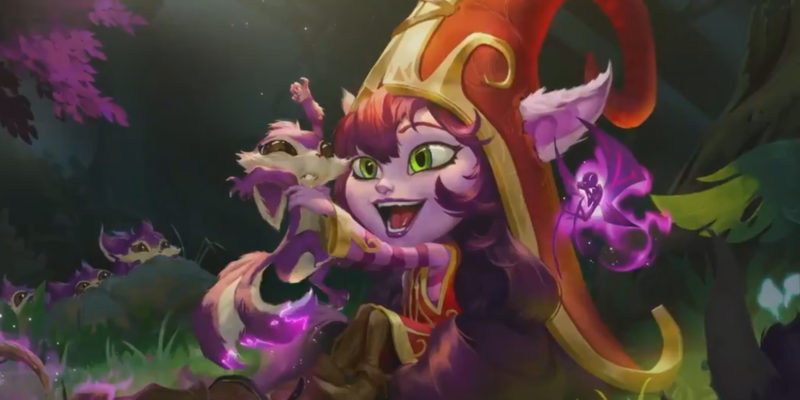 Another day and another reveal for the upcoming expansion for Legends of Runeterra, The Call of the Mountain. Yesterday we saw a new archetype, the fae, revealed with the promise that this archetype’s champion would be revealed today. Sure enough, we did get that reveal today on the game’s Twitter page, with the newest Legends of Runeterra champion Lulu. Don’t let her cute voice or stature fool you though, because she looks to be an absolute powerhouse.

Just like we did for the last new champion, Taric, we will go over all of Lulu’s support abilities and the possible implications on the meta. To start off, Lulu is a 3 drop champion with 2/3. Her ability reads “Support: My supported ally grows up to 4/4 this round”. Her level up condition is a very simple one, “Our allies have been supported 3+ times”. For an entire deck based around support abilities, it will be very easy to level up Lulu even in the early game.

Do not judge Lulu by her size

Speaking of her level-up side, Lulu becomes a 3/4 with the ability “Round Start: Create a Fleeting ‘Help, Pix!’ in hand”. She also has a support ability that reads ”My supported ally grows up to 5/5 this round.” Help, Pix is a 1 drop burst speed spell that says ”Give an ally Barrier or an enemy Vulnerable this round. Can’t be cast in combat or in response to a spell.” Being able to buff up even a 1/1 follower into a 4/4 or 5/5 has huge gameplay possibilities. Weaker followers with abilities like Challenger suddenly become much bigger threats.

Furthermore, the support ability reduces the chance of the buffed-up follower dying immediately after battling. Help, Pix also ensures that your key pieces can be protected and that your opponent’s key pieces can be targeted. It is an amazing card to have access to every turn for one measly mana. 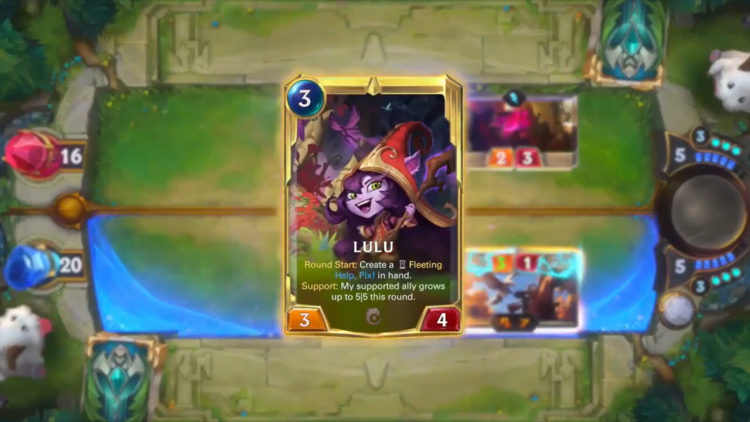 Lulu’s champion spell is ”Lulu’s Whimsy!” It is a 4 drop burst speed spell that says ”Transform a follower into a 1/1 squirrel and Silence it this round. Shuffle a Lulu into your deck.” It is pretty clear how powerful this card can be. This makes any threat your opponent has on the board virtually worthless and ready to get blown off the field. Everyone playing against Lulu will have to prepare for the fact that any of their units could disappear in an instant, for a mere 4 mana.

Pix gets its own follower card that costs 1 mana and has 0/1. Pix has the ability of ”Support: Give my supported ally +2/+1 this round.” If combined with Lulu’s support abilities, as well as Taric’s, Pix can help make any piece on the board an even bigger threat than it already is. 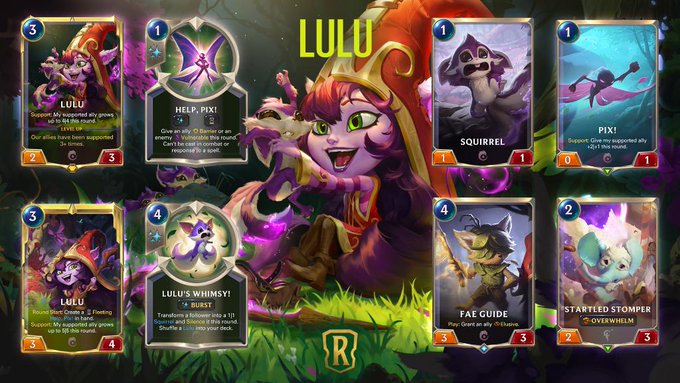 We also have Fae Guide, a 4 drop 3/3 that says ”Play: Grant an ally Elusive.” I already said yesterday that Targon and Ionia would be an extremely powerful combination, and now we have another way to make followers Elusive. Between this and the ‘Ghost’ spell card, a Targon/Ionia deck now has eight ways to grant its followers Elusive. Support cards like Lulu, Taric, and Swole Squirrel, combined with support spells like Lulu’s Whimsy and Ghost means this deck is going to be an absolute force to be reckoned with.

Lastly, we have Startled Stomper, the only Targon region card revealed today. It’s a 2 drop with 2/3 and Overwhelm, which doesn’t seem like much right off the bat. However, when you remember that Lulu can make it a 4/4 or 5/5 with Overwhelm, the strength of Startled Stomper becomes apparent.

It looks like previews will take a break for the weekend, and I suspect they will start back up on Monday. The Call of the Mountain expansion and the newest Legends of Runeterra champion Lulu release in less than two weeks on August 26.