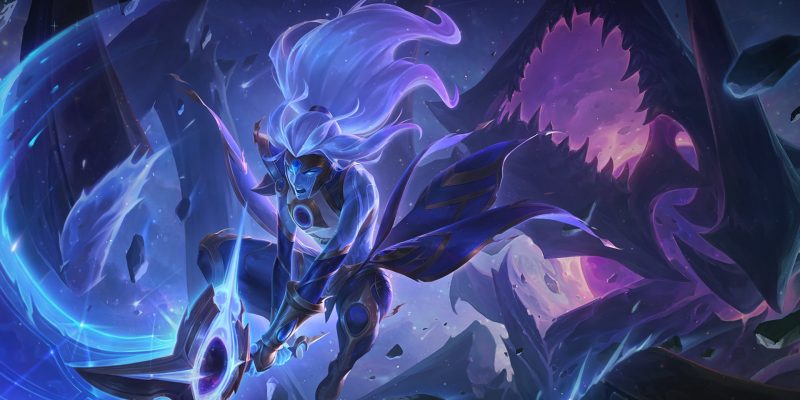 Legends of Runeterra patch 2.8.0 has been released, and with it comes the next big event, Dark Horizon. The theme of this event is alternate universe versions of League of Legends characters battling it out as cosmic entities. Just like previous events, Dark Horizon will contain new boards, card backs, emotes, icons, and guardians. But the biggest reveal today is the long-awaited addition of Legends of Runeterra champion skins.

Fans have been clamoring for skins to come to the game for awhile now. It seemed like only a matter of time before League‘s most popular (and profitable) feature was added to Legends of Runeterra. How Legends of Runeterra champion skins work are very unique due to the fact that they are in a card game. All champion skins will alter the art for all copies of each of that champion’s levels, as well as their accompanying flavor text.

But some skins go a little further, and will even change the champion’s level-up animation. This includes the animation on their summoned units, if they make any. The first four skins being added to the game are Cosmic Zephyr Yasuo, Cosmic Exile Riven, Dark Star Zed, and Dark Star Shyvana. Yasuo and Zed are the two skins that will feature new level-up animations. Likewise, Zed’s Living Shadow units will feature new animations as well. Don’t worry if your favorite champion isn’t included yet, though. Riot plans to release skins on a regular basis throughout the year.

Bling out your favorite champs

The Dark Horizon event pass will be available in the store for 975 coins. The pass grants access to an upgraded event path with premium rewards, and immediately unlocks the Cosmic Genius Von Yipp guardian variant. As you play during the event period, you will gain star fragments that unlock even more rewards. If you purchase the pass before June 2, you will gain access to an exclusive quest that awards 10 Star Fragments and a Rare Prismatic Chest.

There will also be a Horizon’s Edge bundle available for 1,590 coins that includes the Dark Horizon board and an exclusive Dark Emissary’s Realm board with a Mega guardian. Lastly, there is a Cosmic Divide Bundle for 4921 coins that contains all four of the champion skins. Just like always, if you already own some of the items in the bundles, the price will be adjusted accordingly. There will also be a new 2v2 Lab being added to the game for the event.

The event has begun with the 2.8.0 patch and will end on June 16 at 1 PM EST. So there is plenty of time to jump in and start grinding for whatever skin catches your eye.