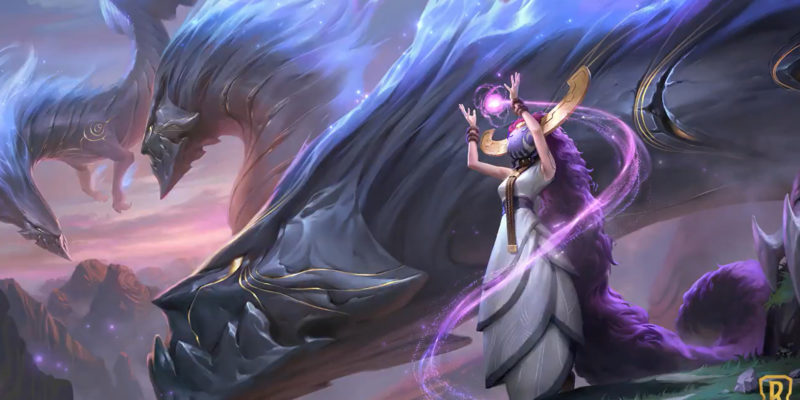 The Call of the Mountain expansion is going to shake the game up in a way we have yet to see before. Between new cards, new champions, and new keywords, the expansion has a lot for fans to be excited about. But before the official release tomorrow we have one more brand new keyword being added to the game to go over. So let’s check out the new Legends of Runeterra Fury keyword and the support it has.

Fury is a new keyword that says, “When I kill a unit, grant me +1|+1.” This is a very straightforward keyword that rewards aggressive play. The cards that wield this keyword are all Dragons, so they come on some pretty hefty bodies to begin with. The first card is Herald of Dragons, a 2 cost with 1/1 and the effect “Dragon allies cost 1 less.” Just like in other games like Magic: The Gathering, Dragons tend to be big and expensive to play. So anything like this that can help make them easier to play is well worth it. If your deck focuses on Dragons, Herald is an automatic three in your deck.

Whiteflame Protector is our first Dragon card to check out. It is a 4 drop with 4/4 and the Fury keyword. A very basic, vanilla Dragon that can become a 5/5 after killing another unit. Not much to write home about this one. Next up is Fused Firebrand, a 5 drop with 5/5 and the Fury and Spellshield keywords. A big unit like this can really use the extra protection to ensure that it can get the kill and trigger the Fury keyword.

Some of Targon’s challenges are a test of endurance. Others are much more immediate.

New Keyword—Fury: When I kill a unit, grant me +1|+1. pic.twitter.com/Pkl9jkXOmO

Next is Screeching Dragon, a 5 drop with 4/5 and the Challenger and Fury keywords. Having Challenger on a unit with Fury makes it even easier to proc the keyword as it can force the opponent’s units into battles it can win. This makes Screeching Dragon one of the better Fury cards as it can get the opportunity to kill multiple units very easily.

Last up is the only spell card support for Dragons (for now at least), Dragon’s Clutch. A 3 drop burst speed spell that says “Draw 2 different Dragons or grant Dragon allies +1/+1.” Being able to grab two different Dragons from your deck for only 3 mana is fantastic. Likewise, just pumping them up enough to get those Fury kills makes for a great secondary ability. 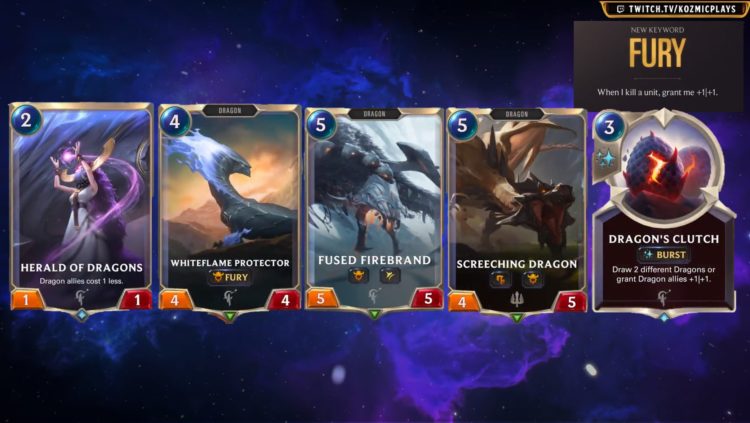 Thanks to @KozmicPlays on Twitter for the visual breakdown

Will you answer the call?

The Legends of Runeterra Fury cards may not be as immediately impressive as some of the other keywords and effects we have seen so far, but they are great for aggro players that just want to beat some face. The Call of the Mountain expansion releases tomorrow, Wednesday August 26. Also, please look forward to our mini-article series starting later this week going over each of the 23 Celestial cards that you can summon with the brand new Invoke keyword. Make sure to follow the official Twitter page for more updates as well.