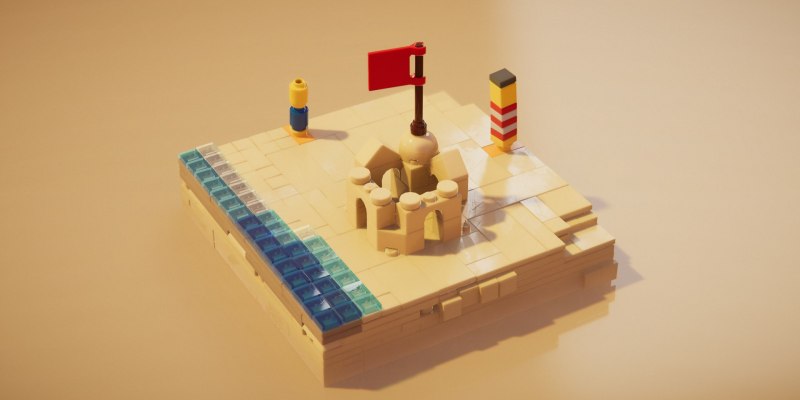 Even as an adult, there’s something genuinely magical about watching the animated scenes of Lego Builder’s Journey come to life. The care and attention to detail developer Light Brick Studio put into each scene and the individual Lego bricks themselves are nothing short of amazing. This is especially true for the PC version, which uses Nvidia DLSS and real-time ray tracing to give the bricks a beautifully realistic glossiness. During a Lego Builder’s Journey gameplay reveal, studio head and creative director Karsten Lund explained that the small independent developer, backed by Lego Ventures, is focused on creative play, which its debut game fully exemplifies.

“The joy is in figuring things out,” said Lund, who also indicated that this was the first in many creative-oriented games to come.

Building a story, brick by brick

At its heart, Lego Builder’s Journey is a puzzle game with environments and structures made from familiar Lego bricks, which are given life with smooth animation. It’s worth restating how astonishingly realistic these virtual Lego pieces are on the PC, since they’re essentially the stars of the game. The animated blue water tiles use ray tracing to reflect overhead lights, creating a bending effect. Shadows bring incredible life to the dioramas. At one point, the player helps build a campfire that’s represented by a single orange light-up Lego peg, which perfectly sets up the atmosphere. Light Brick even added dust, scratches, and fingerprints onto some of the pieces.

According to Lund, each level’s little diorama scenes can be built in real life using actual Lego bricks. Pieces are creatively used as foliage and other decorations, including making the trees out of brown sausages. Even the bubbling mud animations were put together using real Lego elements. So, watching the scenes play out is almost like seeing things through a child’s imagination, which is underscored by the relaxing piano-based music and narrative style.

There’s a very basic tutorial that teaches you how to pick up, rotate, and place bricks, but that’s about it. The rest is relatively intuitive, as you pick up different pieces and fit them onto a scene so that the main character can move from one point to another. There are also two flat, yellow tiles called jumpers that need to be placed in front of the controllable characters to make them move. Players may choose to move a character while solving a puzzle at the same time. For instance, you can have the character step up onto the first brick while you’re building a kind of staircase up to a higher level. Or you can wait until you’re finished with the build before making any moves. 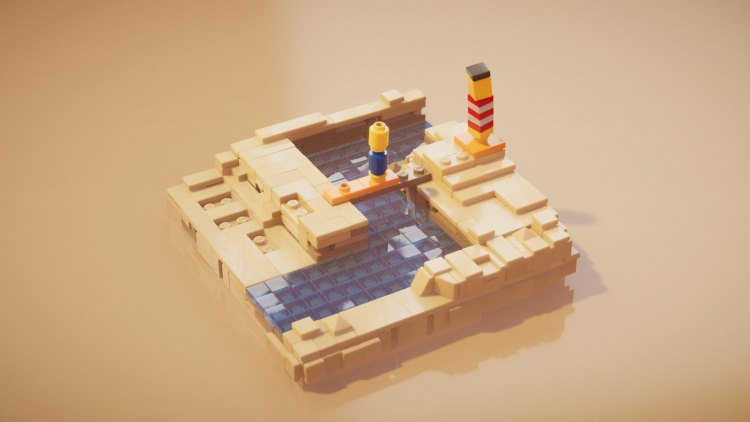 The narrative involves a child and parent on a journey home after a day at the beach. It’s up to the player to assume their genders since the characters don’t have any. Instead of using Lego minifigs, the characters are built out of single peg bricks and hop along. Lund explained that this new kind of minimalistic design supports the kind of poetic language the game is going for while sparking people’s imaginations. The current characters fit well into the diorama space, where minifigs would tell a different kind of story and even steal the show from the Lego pieces that are at the heart of the game.

Aside from some decorative features like backpacks that are also made from bricks, they don’t have appendages, nor do they have faces. Yet, somehow these hopping Lego sticks manage to convey a great deal of emotion as the different levels play out. There’s something about how they bend at their segmented parts that tells a story without a single word of spoken dialogue.

For instance, the first puzzle challenges players to use a piece to create a bridge over a stream. Even as Lego pieces, I imagined the brown piece as a branch that floated downstream and used as a bridge. Once the child crosses the bridge, the family celebrates the success by jumping up and down. It’s a short, but effective moment that got me engaged with this world of Lego models. The next puzzle involves building a staircase to reach the upper part of a hill. Once there, the child is rewarded with a backpack and hat, which float onto him with invisible hands — much like the invisible hands of the player manipulating the bricks. 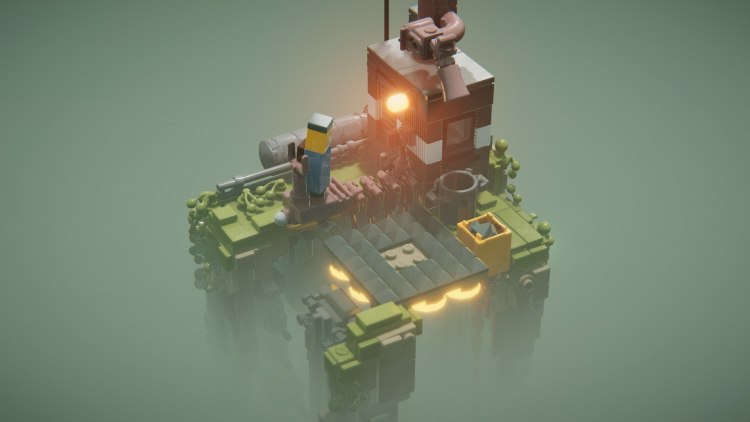 Lund explained that the story is about remembering to play. Things happen that remind the characters how important it is to take time to play with each other. Both the narrative and emotion are further conveyed through the relaxing music.

Bringing the Lego Idea to life

Players are free to solve the different construction puzzles in whatever way they choose. Lund describes this cerebral kind of open-ended gameplay as the Lego Idea, a term that’s probably inspired by the Pinterest-like LEGO IDEAS social platform. Although the game has a generally laid-back, almost meditative feel to it, it does begin to ramp up the difficulty with increasingly complex puzzles and some that require timed movements.

One example is when the player has to build a bridge using odd-shaped and sloped pieces. 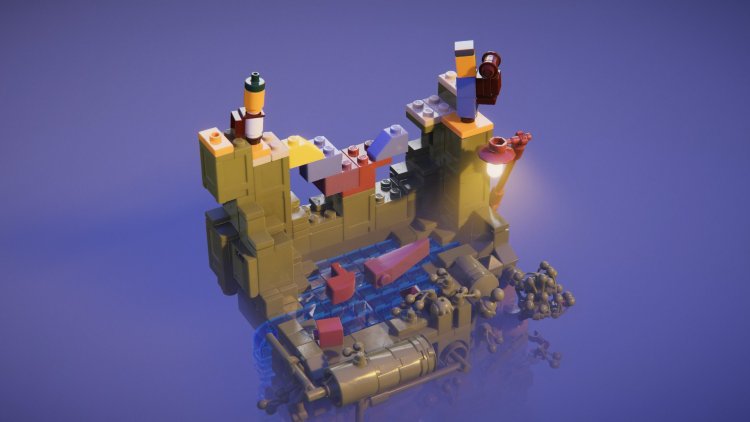 A different level challenges the player to lay bricks over a large mud puddle, which sink as the child steps on them, forcing players to think ahead quickly to get them across. After that, players are introduced to a level with a counterweight system that lifts both characters up to the levels they need to get home.

The demo gameplay demonstration ended when the family returned home. Without giving away too much, Lund hinted that the full game will include a story about balancing between creative playtime and having to do other things. Using your imagination will also be an important motive. 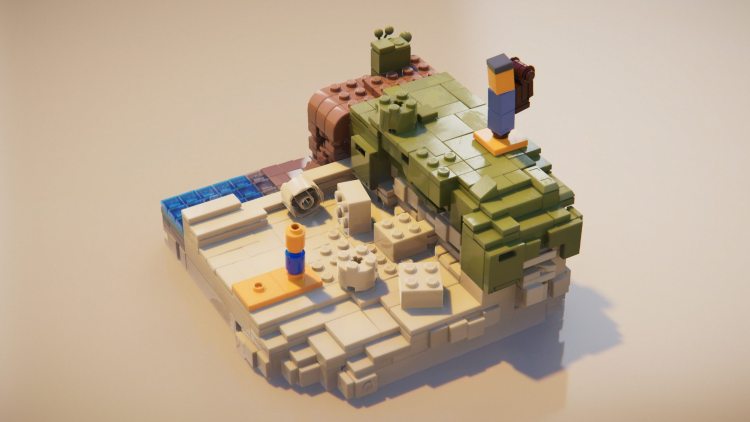 “We believe that it’s a very important theme that isn’t talked about enough – the fact that we should be playing more, no matter what age we are,” said Lund. “It’s something that helps us develop and be in that state of flow where we are more creative and come up with great ideas.”

With that being said, players won’t be able to create and share custom levels at launch. However, Lund suggested that it could be included as a possible add-on in the future. He also said that the game can be completed in a single sitting or afternoon. The PC release will primarily use keyboard and mouse controls, but you can also use a gamepad, which also provides rumble feedback. Light Brick also mentioned Steam Controller support. Ray tracing features are exclusive to the PC version, but it can be played with the enhancements turned off if you don’t have a supporting graphics card.

By Martynas Klimas4 hours ago
Previews