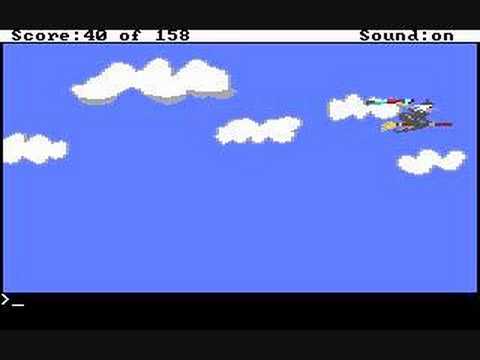 Oh, Larry. Has it really been more than 25 years since you first sleazed your way across our PC screens? Yes. Yes it has. And the intro to Leisure Suit Larry: Reloaded makes this perfectly clear, with the original bleeps and bloops of the PC Speaker theme seguing into a robust, big-band version of the track.

It’s a neat opening touch that works to remind you that this is a remake (if you somehow missed that) and that tech has moved on to unprecedented heights since Larry made his debut.

The remake maybe doesn’t look as nice as you expected. Ho ho, I kid! This is a picture of the 1987 original! Oh, what a joker I am.

In case you’ve never come across (snicker, snort) this particular protagonist before, the long-running Leisure Suit Larry series stars Larry Laffer, perennial loser/girl-chaser with a nice line in polyester suits and a rather bad track record for getting the girl. Generally, the player’s goal was to point-and-click (or, considering the first few games came out before point-and-click was standard for adventure games, move-with-arrow-keys-and-type-phrases) through a host of puzzles so that Larry could meet and seduce the woman of his dreams. Who would inevitably kick him out by the start of the next game.

But first came the original 1987 Leisure Suit Larry in the Land of the Lounge Lizards (itself a graphical remake of a 1981 text adventure named Softporn Adventure) which, when looked at now, is very clearly a product of its time. Other than its love of killing players for doing entirely mundane actions, it also featured a few dead ends, mandatory gambling minigames, and not much in the way of structure barring “solve puzzles to woo women and watch as it goes horribly wrong, until you can seduce the Last Girl.” (Admittedly, lots of the other games also used this framework, but they tended to have more direction.)

This one actually IS a screenshot of the remake. And I’ve only just noticed that Faith’s breasts take up literally half of the screen’s vertical space.

That’s is the game that’s now being remade as Leisure Suit Larry: Reloaded, and considering the original wasn’t particularly long or hard (chortle, fnarr) it’s probably not a surprise that the remake has been fleshed out (titter, giggle) with shiny graphics, voice acting, plenty of changed text, and a host of new and altered puzzles that lengthen the game a little and prevent the aforementioned dead ends.

Despite these changes, LSL Reloaded feels very much like an 80s-era adventure game – it’s just a hell of a lot friendlier than it used to be. The plot is still the same: you’re still helping the middle-aged Larry lose his virginity and in the seedy, not-at-all-based-on-Las Vegas city of Lost Wages. You still visit the same locations and meet the same girls (plus one new one). You’ll still die if you’re silly enough to, oh, walk one screen to the left of the start, or cross a road, or flush a toilet. Yes, you can die on the first screen. And yes, this used to be normal in adventure games.

But now, rather than deaths being the developers’ means of punishing you for experimenting, they’re more like easter eggs: you get an achievement, a little cutscene, and you’re then you’re placed back to before you made your mistake. Considering the old-school Sierra adventure deaths were varied and entertaining, it’s nice to see developer Replay Games keeping up the tradition but encouraging you rather than punishing you.

I wonder how many Sierra games killed you for trying to cross a road? I know there’s Larry 1, Laura Bow 2, and at least one of the Police Quest games, but I’m sure there must be more…

Yet many of the little foibles present in the 80s version still exist, to some extent. Some items are still located in completely bizarre places or are well-hidden on the screen. You still use a taxi to get around the city, and you still have to buy a lot of items, and this means that you have to play slot machines to build up your earnings… only you can savescum your way through these, which makes them an exercise in repetition and saving/loading more than anything else (although it is worth running out of money three or four times, just for the dialogue, and no I’m not going to spoil it).

But that gambling rubbish could be savescummed back then, too, which I suppose just means that this is a faithful remake/update. That’s not entirely a good thing for the reasons listed above, but there are some lovely touches to sweeten it all out.

As mentioned above, there are luscious new high-res graphics; the game looks lovely, and it’s nicely animated to boot. The voice acting is excellent, with veteran voice actor Jan Rabson reprising the hapless Larry and Brad Venables playing the snarky narrator with a wonderful mix of smugness and long-suffering exasperation, and the jolly dialogue – particularly the back-and-forths between those two, which use the fourth wall as a revolving doorway – helps it all along.

Actually, does anyone else remember Laura Bow? That was an inspired series, even if it didn’t quite live up to its potential. And half of the deaths in the first game made no sense once you knew what was going on.

There are also jokes hidden everywhere. Other than the old adventure game standbys of “look at” and “pick up” and whatnot, your icons include one used for tasting or smelling things, and… well, a zipper icon. Do I really need to explain the sort of actions that result from clicking that on something? No, I thought not. And if you answered “yes” then you’re probably too young to play this game.

Anyway: the point I was getting at is that there’s an entirely unique response for clicking these icons on basically anything (including clicking the zipper on the moon, and trying to smell/lick someone’s eyes) and while few are laugh-out-loud funny, there are plenty that raise a wry smirk – particularly when the narrator is picking on either Larry or you. In fact, the “jokes everywhere” is even more impressive than I thought: while taking screenshots and readying this article for the site, I discovered that the dialogue for trying to open one particular door appears to change if you try to taste/smell it first. That’s a fairly unprecedented level of attention to detail, these days.

Alright, so maybe this one isn’t quite so wink-wink nudge-nudge. Shush. Anyway, Laura Bow 1: it was like the game changed the plot specifically so it could kill you. And don’t get me started on that chandelier.

The only big problem LSL Reloaded has in the build I played is the number of bugs, which was the reason given for its release being delayed – and yes, I did try to work in a pun about crabs there, but it was harder than it looked (wink, guffaw). I’m certainly pleased it wasn’t released in this state (I wasn’t being particularly thorough and I still hit a fair few) but none of the bugs are showstoppers, and I can’t imagine Replay Games will have too much trouble sorting them out in time for launch. So hey, everything’s looking good on that front.

LSL Reloaded‘s problems aside, my problem with writing this preview is that I’m trying not to review the game. What I will say, though, is this: if you’re the sort of person who Kickstarted the project, then… well, this is probably what you were expecting. Assuming it’s all fixed and polished up in time for launch, it looks like Replay Games will have done exactly what they promised: updated the original game, made it prettier and more amusing, removed a lot of the annoyances, and added in some new content. It’s familiar but fresh, and if you were a fan of Larry as written by Al Lowe then it doesn’t look like you’ll be disappointed.

Son of Nor reaches funding goal