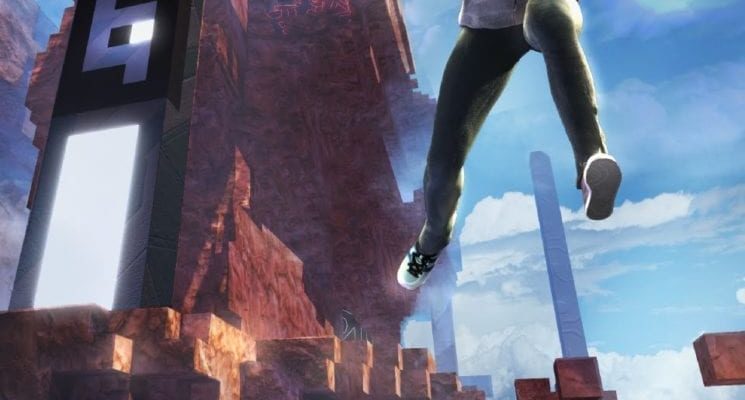 The word ‘lemma’ means a few different things depending on what field of study you are in. The psycholinguist will tell you that a lemma is an idea that is about to be voiced, like when the name of that one movie star is sitting on the tip of your tongue. The mathematician will tell you a lemma is a piece of logic that has no importance on its own, but builds towards a theorem. In morphology, a lemma is the base or default form of a word.

Lemma puts you in a strange world with floating blocky platforms and glowing cubes. A man named Mark gets in touch with you through a cell phone and begins to guide you through the various regions. This world is Mark’s discovery, or maybe his invention. But he is insistent you leave for your own safety.

Lemma is largely about creation and destruction. The game feeds bits of pseudo-quantum mechanics in the form of notes left on the ground for the curious. Mark has discovered that he can create matter from light in this dimension you now find yourself in.

You are able to traverse the regions using parkour. It controls with only a few keys and is fairly fluid. The character’s movement is rarely unpredictable. As the game progresses, the ability to create surfaces is attached to various movements. A roll will create an new floor when done off the edge of a platform. When you run out of wall in a wall run, it will simply create more.

The walls and platforms themselves are fascinating. Depending on their colour and texture, they might carry or produce something akin to electrical current. When smashed, they fall apart into individual cubes, each affected by physics individually.

Creating and occasionally destroying the architecture is rewarding in it’s own right. Once you’ve spent enough time in an area you will have created a new network of platforms and walls to ease travel.

Throughout the game, somewhat disembodied defense mechanisms are out to get you. They cannot be attacked. You must run.

Suddenly the wonder and curiosity are gone and replaced with panic as a digitized noise of the defense mechanisms get closer and somehow angrier. Everything becomes about getting away from the noise. And it is just a noise. You can’t afford to turn around to look at the source. Nor can you afford to really look where you are going. It’s just up, over, across. Just anywhere that is away.

Getting across each level requires certain objectives to be met. Usually that means bringing power to a door or a bridge. You create structures and make connections as you run from enemies who tear them apart behind you.

I usually didn’t know how the game wanted to me complete an objective. Sometimes that brought out my own creativity. By the time I figured out the puzzle, I wouldn’t be sure if I had done it in the way that was expected. And that’s a good thing.

This backfires, sometimes. There were several occasions when I had run past an crucial piece of the puzzle (perhaps as I got away from a pursuing bomb). After trying to figure out why I can’t progress any further I would have to backtrack to make sure I didn’t miss anything.

Being stonewalled and having to tediously backtrack through familiar territory repeatedly is frustrating, especially with agents of destruction chasing you in every direction. In the options menu, there is a toggle for “waypoints,” which I had turned on. But they seldom came into play.

Thankfully the game is forgiving and encourages your creativity and experimentation. Death simply brings you back to life in the last place you were safely standing.

The levels are vast. Often larger than needed. You could spend time climbing mountains with nothing useful at the top, especially closer to the end of the game. If you’re not careful you can find yourself lost is the towering pillars and sprawling platforms. This can make finding the objective somewhat more frustrating, but also has a certain feeling of freedom. You can move in any direction and explore the strange changing world.

Aside from the story mode, Lemma has a time trial mode with leaderboards. It comes with five challenges to start with and support for more challenges to be added through Steam Workshop.

The built in level editor is difficult to use and unintuitive for anyone without game design experience. I had difficulty creating even one new platform. But anyone with experience in modding or game design should feel at home. Hopefully a community grows to support the game long term.

No matter which definition of ‘lemma’ you use, they all agree on one point: a lemma is the beginning of something greater. This game is Evan’s Todd’s first big release. It’s more than a little impressive. Lemma describes not only the beginnings of the quantum world it takes place in, but also the promising career of its maker.

Lemma releases May 12 on Steam for PC. This review was done using an early access version a week before its release.