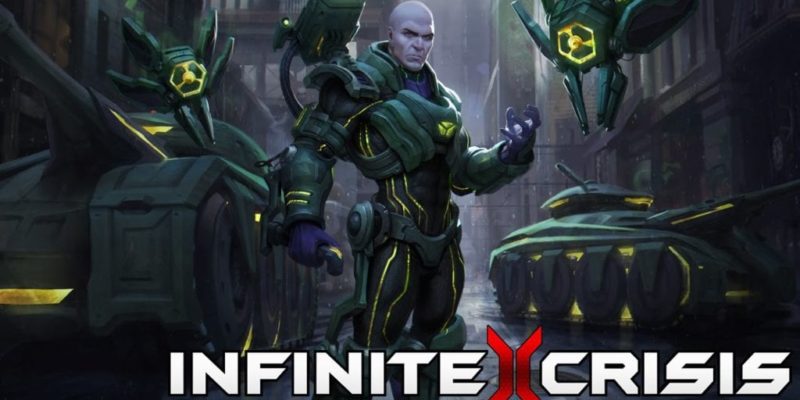 Infinite Crisis‘ next champion is getting a moment in the spotlight: the devious, brilliant Lex Luthor.

Lexy-poo (as nobody ever calls him) is a Blaster-type champion, so he’s focused on ranged power damage. His big thing is his Q ability, Lexcorp Sentry, which deploys a sentry which fires upon the nearest enemy. These are charge-based, so he can plop down a few at a time, but it’ll take awhile for him to rebuild his reserves.

This ties in neatly to his passive, Neural Networking: when a sentry is deployed, it links to nearby sentries with an energy beam. Enemies caught in the beam suffer damage over time, and should one linked sentry be augmented, the augment is passed to all other linked sentries.

His two other main abilities feed back into this with multiple uses, depending on whether they hit an enemy or a sentry. His W, Tactical Disruption, will stun enemies in a target area and dish out damage over time… but any sentries it hits will be healed to full, have their durations reset, and will slow enemies with their next few attacks.

Lex’s E, Critical Mass, launches a blast of energy in a straight line which stops when it hits either a sentry or an enemy champion. If it hits an enemy, they take a large amount of power damage. If it hits a sentry, the sentry will fire out its next few shots rapidly, and will inflict more power damage per hit.

Finally, his ultimate is Orbital Remediation, which is a fancy way of saying “giant bastard laser satellite blasting the hell out of the enemy.” This attack has an absurdly long-range and focuses on one target point before sweeping out in a straight line, murdering any enemies unfortunate enough to be in its path.

His weaknesses are a distinct lack of mobility and needing some time to set up for battle, so if he gets caught out he’s doomed… but this is pretty heavily counterbalanced by what should be a very, very strong laning presence, and some fantastic teamfight utility.

You can see more of Lex in the video below, or by checking out his Champion Unmasked page on the official Infinite Crisis site. Infinite Crisis is out now and is free-to-play, so if you fancy some DC MOBA action, you might as well give it a look. I’ve been playing it a bit more lately, and honestly, I’m quite enjoying myself.

Act of Aggression video looks at the US Army