Prior to Life is Strange, DONTNOD’s only title was Remember Me, an unremarkable third-person brawler. Except calling it “unremarkable” is a bit unfair: while the face-punching was dull, it was buoyed up by an interesting plot, excellent art design, and superb little end-of-level sections that had you tinkering with people’s memories, forcing scenarios to play out in different ways by subtly altering things.

Life is Strange is an episodic adventure. This seemed like a good fit to me, because this meant DONTNOD could focus on art direction, plot, and choice/consequence tinkering without having to space it all out with boring punch-kicks. How well does it work? I have no idea! It’s an episodic adventure, so I’ve only played one-fifth of the finished product! 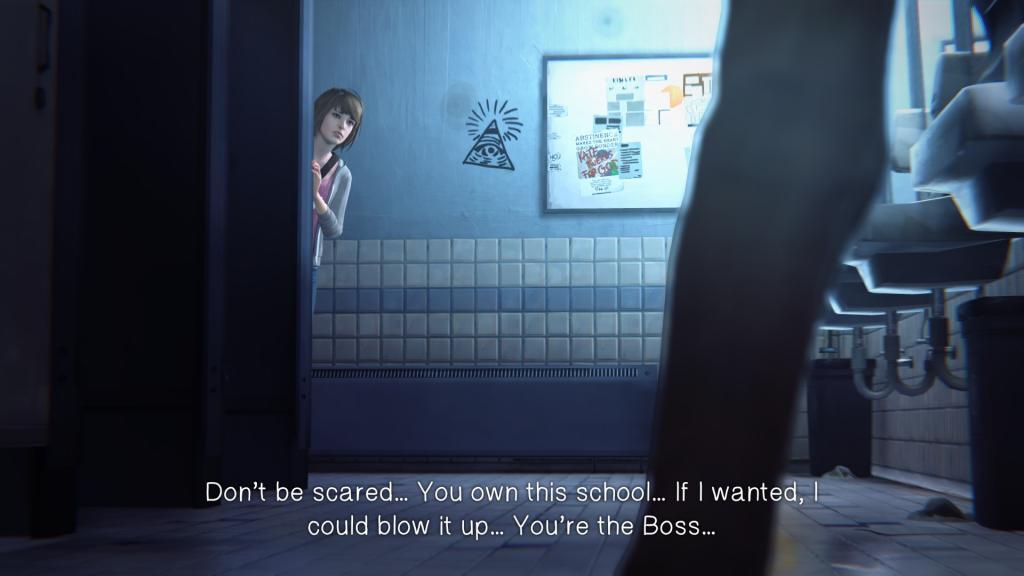 It starts well, at least. You’re Max Caulfield, an 18-year old photography student starting at a prestigious academy, which just happens to be in Arcadia Bay – the hometown she moved away from five years prior.

Then things get a little weird. Following a strange vision/dream of a huge tornado hitting the town, Max wakes up in class, despite having not fallen asleep. When she goes to the bathroom after class, she witnesses a blue-haired girl being murdered… and then somehow rewinds time, winding up back in the classroom. Other than giving her the opportunity to answer a few questions correctly in class, this also gives her the opportunity to prevent the murder, and thus set in motion a new chain of events.

Not all is well in Arcadia Bay, either. The school and police seem to be run by the rich elite, the rich/cool kids are dicks with their snobby Vortex Club and bullying and so on, and there are continual hints of dark secrets. 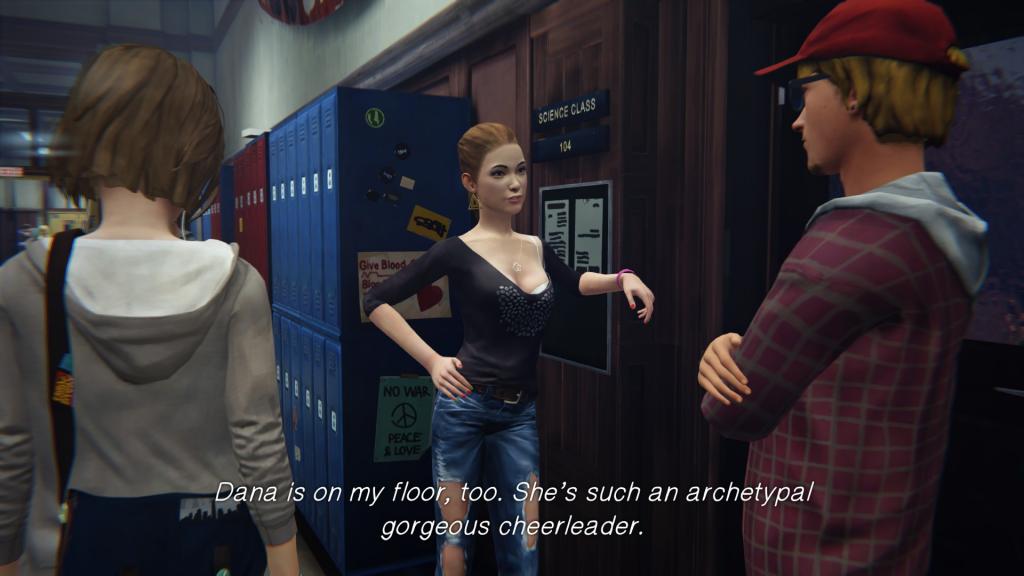 In terms of a basic comparison, it’s sort of like Veronica Mars by way of Donnie Darko. You’ve got the affluent ruling society of the former, complete with the exaggerated power of the rich schoolkids and the hints of darker things lurking behind the shiny façade, but you’ve also got the timey-wimey supernatural weirdness of the latter, plus hints of Very Bad Things that are going to happen soon.

This has its good and bad points. Max herself is fairly likeable, despite being a shy and retiring wallflower, but there’s a lot of teen angst and stereotypes wrapped up in the other characters; a large part of the first episode is taken up by trying to get some mean girls off the steps so you can get into your dorm, followed by finding a way to prove that someone didn’t cheat with someone else’s boyfriend. I hope for deconstructions and subversions in later episodes. 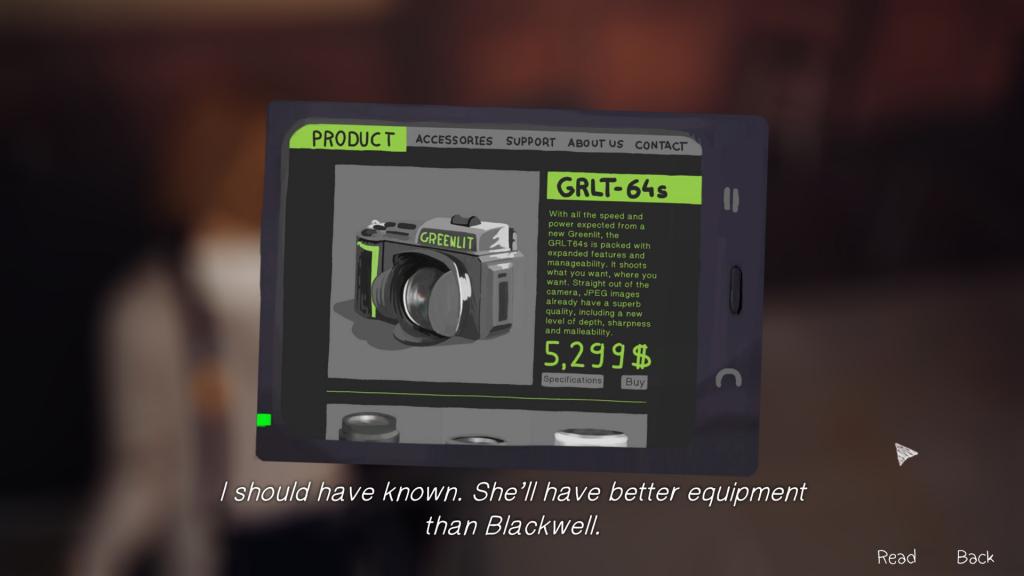 Artsy, rather than photo-realistic. It’s normally slightly more realistic than the font in this shot would have you believe, but nonetheless, I approve.

What I can’t fault is the art direction, which has this lovely painterly style – particularly in close-up examinations of objects. Examining a tablet screen, for instance, doesn’t give you a lovingly-rendered depiction of the tablet, complete with a super-realistic image of whatever’s meant to be on the screen. Instead, you get… well, a fairly simplistic painting, which I rather like. This – and the bright, striking colours of the world and the characters – provide a nice contrast to the hints of darker things that are evident pretty much everywhere. Everything is bright and beautiful and clean, and there are squirrels everywhere, but this is all plastered with Missing Person posters and conversations hinting at things just below the surface.

The music – largely indie folk music, which you’ve probably noted if you’ve seen the trailer – is much the same, and this, too, works really well, giving the game a breezy but melancholy feeling. Spot on.

I also can’t fault the choice/consequence and the time manipulation, although again, I hope that this first episode is mostly about introducing players to the mechanics rather than showing the limits of what DONTNOD are able to do with this. 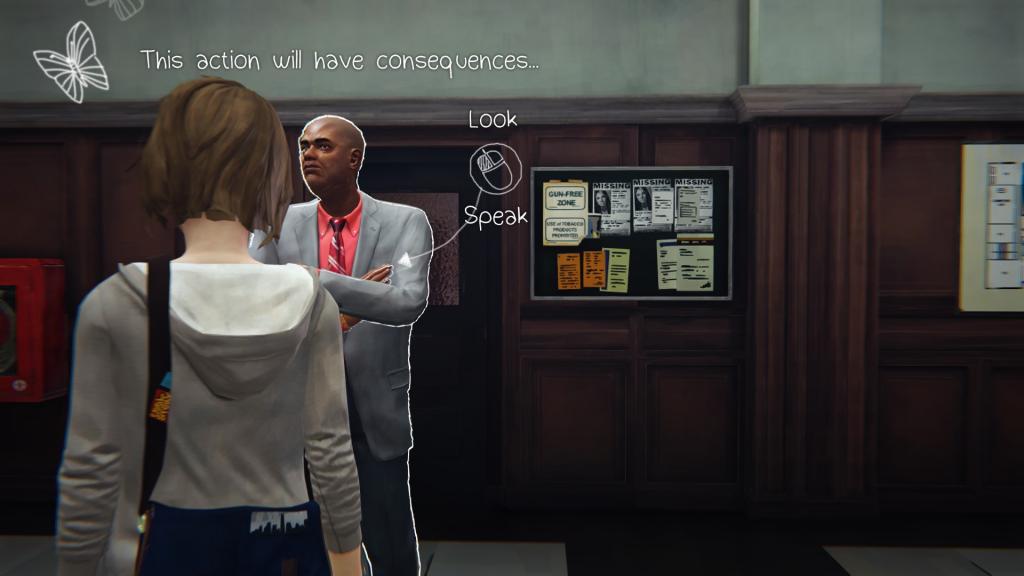 Principal Wells will remember that.

You can manually rewind time by holding down R, which lets you go back to the very start of an area if you so choose (and once you leave an area, you can’t rewind any further, so don’t worry – your cat won’t take you back to the start of the episode if it decides to fall asleep on the keyboard). Somewhat more usefully, you can just tap CTRL to whoosh yourself back to just before the last decision you made.

This has multiple uses. For one thing, there are plenty of BIG DECISION POINTS in the game, and so you can rewind and see what happens if you take another option (but not the long-term consequences, obviously, because few – if any – of those happen in this episode.) You can accidentally piss people off and then rewind to before that. You can find out information from someone, rewind, and then redo that conversation, possibly with new conversation options based on what you just learned from them. It’s not really used to great effect, but it’s great fun to play around with. Annoy your teacher until he quotes John Lennon at you, and then rewind and quote John Lennon at him to convince him you’re a kindred spirit! 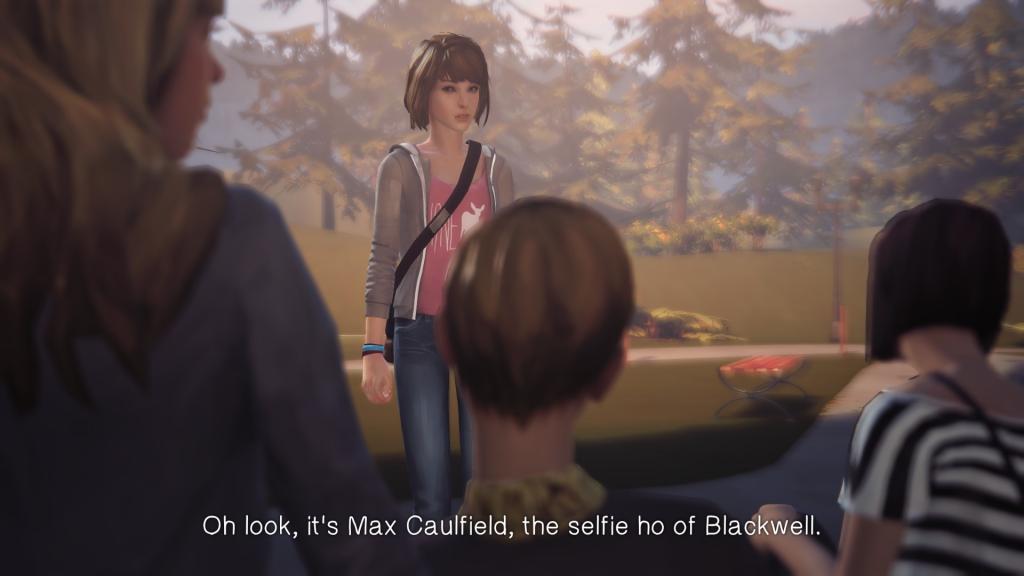 And now, spend the next five minutes trying to get them off the steps.

There are also a couple of simple puzzles (yes, puzzles!) relying on this, but I’m not going to go into too many details because this episode is two hours long and I don’t really want to spoil everything. Let’s just say that a couple of things are slightly time-sensitive, so you’ll have to rewind to set things up.

But we still hit the inevitable problem with episodic games, which is that this is only the first episode and so there’s a lot hinted at but absolutely nothing is resolved. This first episode is really a prologue, or a pilot episode – it focuses more on reuniting Max with her childhood friend Chloe, introducing some of the major players, and giving a sense of what might happen, rather than throwing you neck-deep into the central mysteries of Max’s powers, the mysterious tornado visions, and the missing girl. It’s compelling, certainly, but I can’t speak to how well it’ll be resolved or how well the mechanics will turn out. 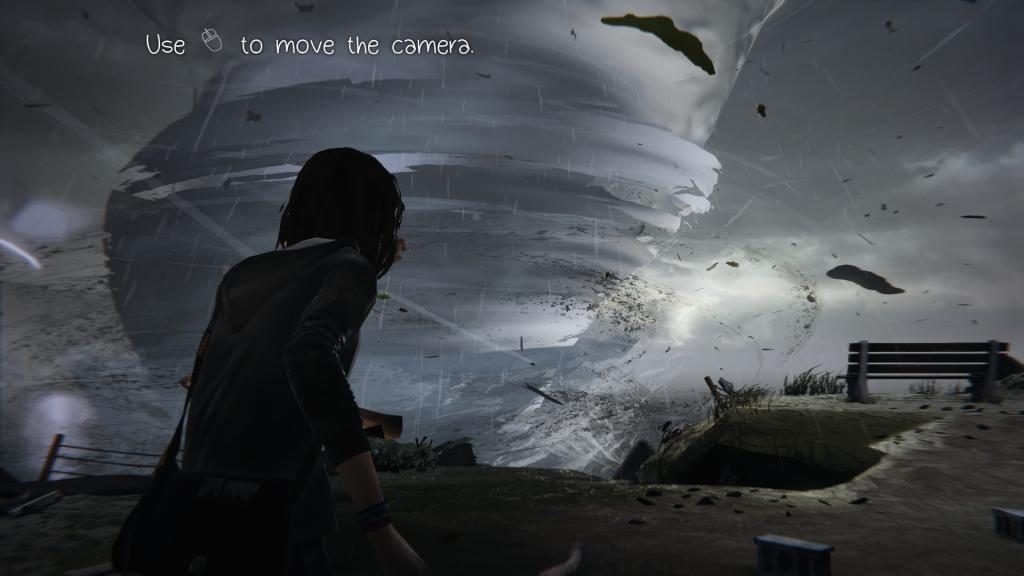 Considering you can pick up the first episode for £3.99… yeah, I’d say it’s easily worth a punt. If you like this sort of story-driven adventure and want some neat twists on top, then the first episode is absolutely worth a purchase, just to see if the atmosphere is your sort of thing. In terms of dialogue and direction it’s very much like a playable indie movie, and in terms of being story-driven but with lots of little things to interact with and play around with, it’s more Quantic Dream than Telltale Games.

I have high hopes for Life is Strange, and it’s fair to say that I’m eager to see where it goes. I have thoroughly enjoyed my two hours with the first episode. But, because it’s episodic, I really can’t recommend you rush out and buy the season immediately. I’d be very surprised if it falls flat on its face in the coming episodes, and this is a really solid opening, but it’s also part one of five. 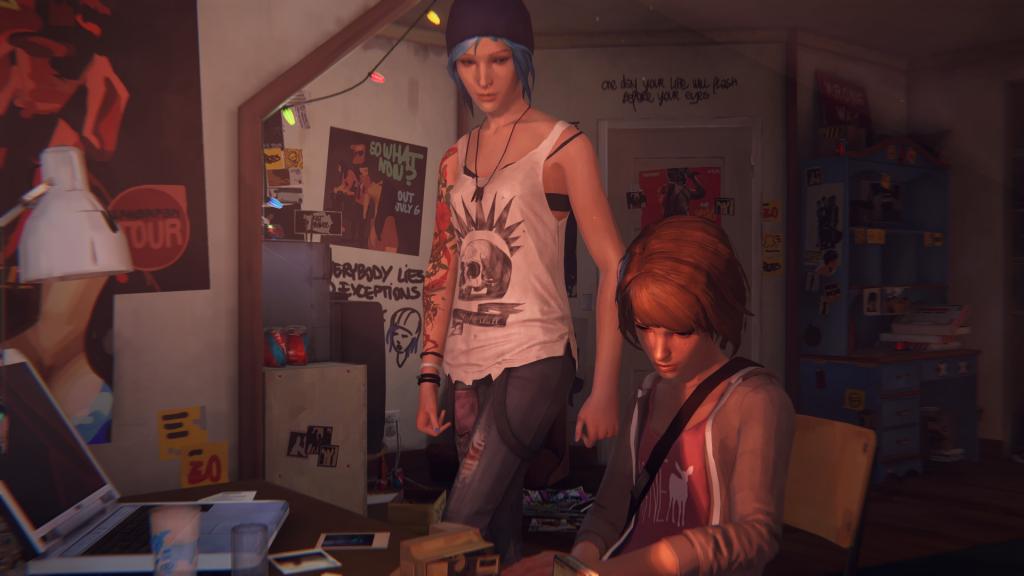 I really can’t stress how much I love the art direction, though.

By all means, buy the first episode. Try it out, and see what you think. It’s cheap enough and self-contained enough that you’re not hugely out of pocket if you don’t get on with it (which will be more down to the atmosphere than the gameplay, I suspect), but you might want to save your full-season purchase until at least another couple of episodes have appeared and I’ve got a better idea of where it’s all headed.

By Steven Wong12 hours ago
Reviews