Life is Strange is getting dark. I don’t mean literally – if anything, there are less flashes of the pitch-black night with the apocalyptic hurricane in this episode than in its predecessor – but in terms of the themes… welp, things get remarkably unpleasant, remarkably quickly. 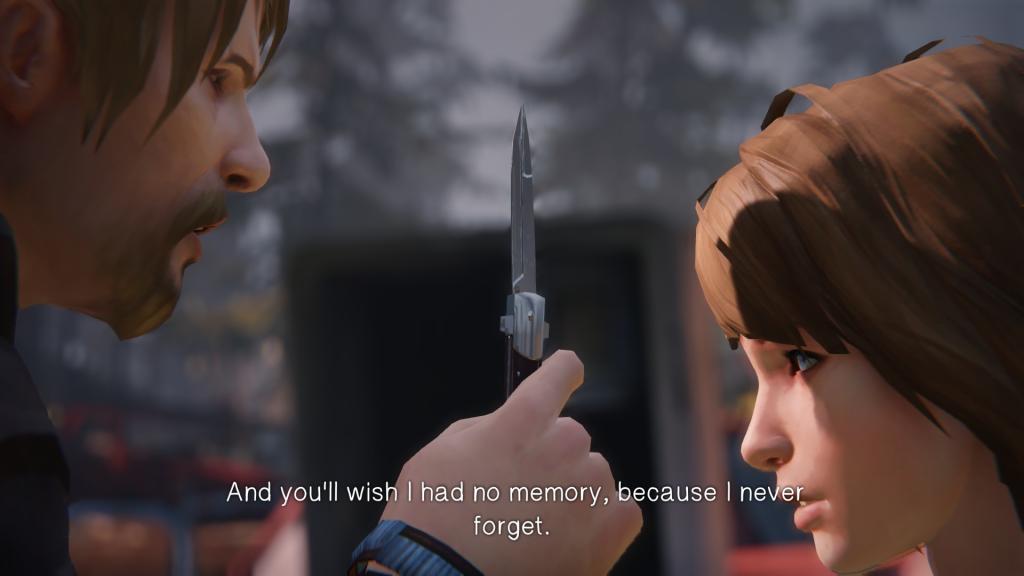 Probably one of the lighter moments of the episode.

Other than the pervasive mystery of what happened to Rachel Amber (which, all told, might wind up being incredibly dark by itself), this episode touches on themes like drug dealing, and loansharking, and suicide, and date rape, and disbelieving authority figures, and probably a whole lot more that I forgot thanks to the cavalcade of awfulness present in these two to three hours. I’m really not exaggerating, either: on returning to the title screen after finishing the episode, I was greeted with a scrolling message telling me that I should visit a page on the official site for help finding support groups in my country if I’m affected by any of the issues in the game. I think that’s a first.

So don’t like the indie music, bright colours, and gorgeous art style fool you: this is not a happy game. And let’s not forget that this is just one more day in the life of Max Caulfield, our unlikely time-travelling heroine; I wouldn’t be surprised if things get worse before they get better. 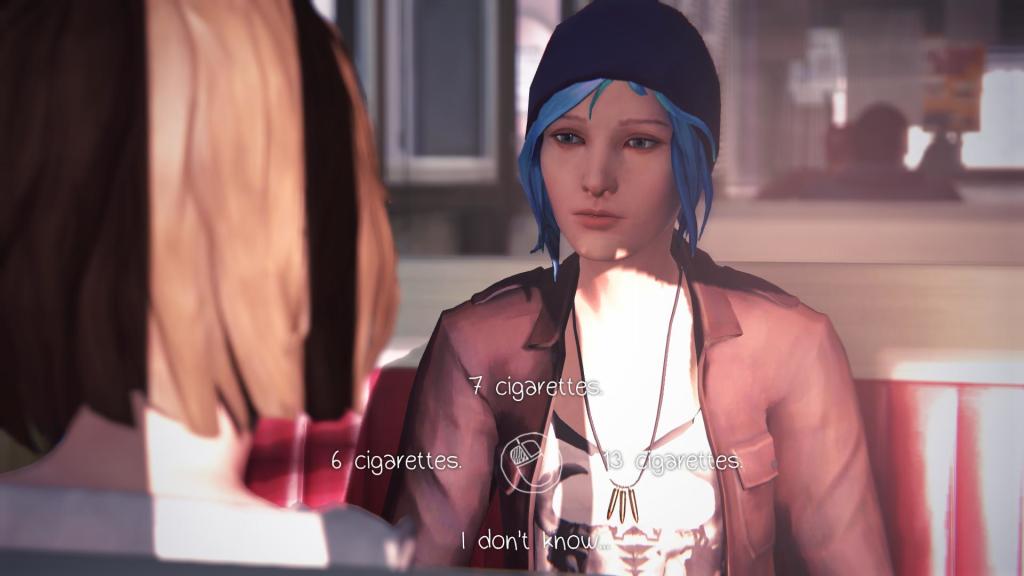 Okay, so that’s maybe not the most amazing use of time-rewinding powers, but…

When last we saw Max, she’d just reunited with her estranged BFF Chloe. The early part of this episode revolves largely around Chloe, who demands proof of Max’s time-distorting powers in a series of fun little vignettes that test your memory and observation skills as you rewind scenes again and again, predicting what’ll happen or subtly nudging the outcomes. We also get a bit more time with Max’s student buddies and the town locals in a few optional little scenes based around the dorms, the local diner, and the school halls just before class.

I actually like these optional scenes, oddly, although “optional” might not be the right word for reasons I’ll explain shortly. If you’re eager to rush to the end of the episode then you can just proceed straight to your goal… but you can also wander around chatting to people, learning the latest gossip, and interacting with seemingly pointless bits in the environment. A lot of care and attention has gone towards these scenes, with all sorts of leaflets and posters to examine and nameless characters to chat up, and it shows. These bits shine. 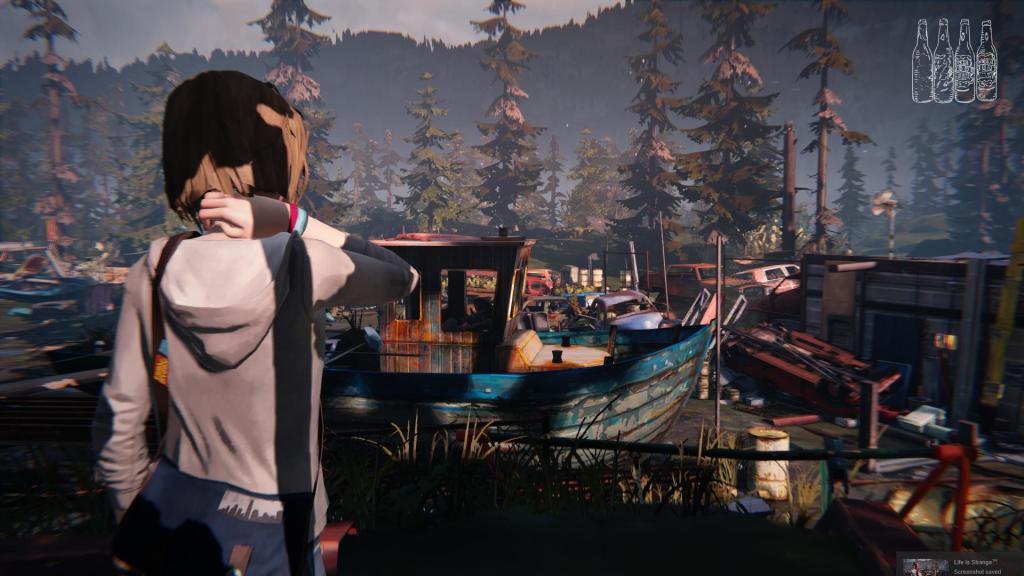 Despite the omnipresent awfulness, Life is Strange is still one hell of a pretty game.

The thing is, this episode also proved that these interactions aren’t exactly pointless. One bit towards the end of the episode reflected on a few of the decisions I’d made across both episodes so far and revealed that Life is Strange has been tracking some of the “pointless” and “optional” bits I’d been doing, with the outcome changing because of them. Without wishing to spoil the details, that scene was viciously harrowing. Not quite as much of a knee to my emotional nuts as Dreamfall Chapters pointing out that my decisions are entirely responsible for a terrible event happening, but infinitely more stressful while it was going on.

Still, I could’ve done without the “roam this area looking for bottles” bit that took forever thanks to one of them being hidden away remarkably well. Or I’m just blind. One or the other. Who knew that finding trash in a junkyard could be such a tricky endeavour? 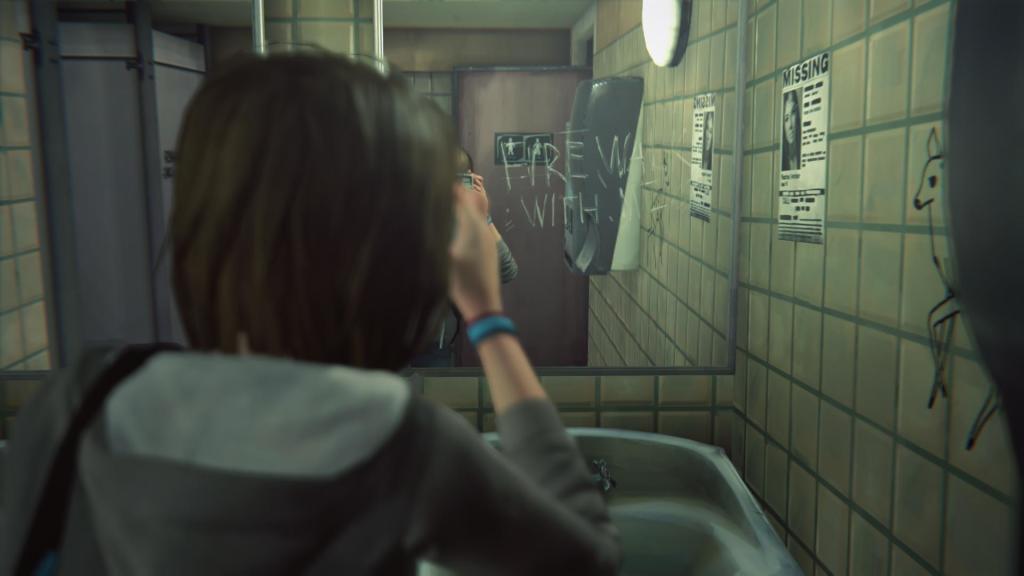 One of the less overt references, there.

As a personal aside, I’m still seeing Life is Strange – thematically and stylistically – as more of a Veronica Mars meets Donnie Darko, rather than Twin Peaks; and no, referencing Twin Peaks repeatedly won’t change that. Yes, you could build a drinking game around spotting the Twin Peaks references in this episode. No, that doesn’t mean Twin Peaks is the first thing that pops into my head while playing it. Sorry, devs.

But I am very much liking where things are going. Life is Strange alternates rapidly but convincingly between the emotions it triggers; most of the time it’s a calm, vaguely melancholy game with spots of wry humour, but it occasionally gives a creeping sense of unease and ominous foreboding, or drops you into high-pressure, stressful situations. 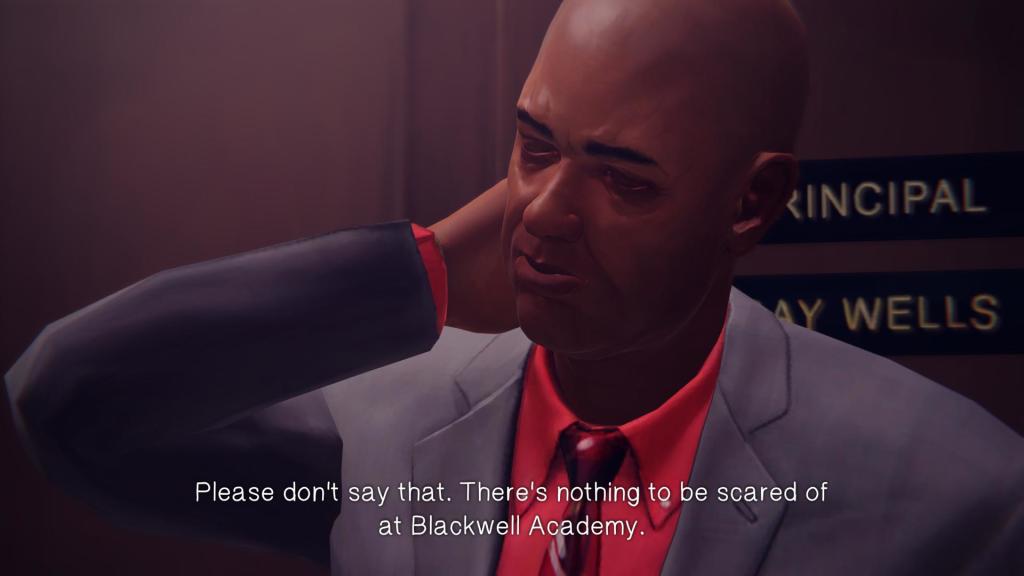 Christ. Sorry about that. I should’ve given some sort of wank-hat warning, but I’m running a bit low on things I can discuss without resorting to “I really liked that scene where resident psychopath Nathan burst into song and then randomly exploded into a shower of gore.” Partly because I just made it up, but mostly because that’d constitute a pretty major spoiler, if it actually happened. Which it didn’t. I feel I should reiterate that before I start getting hatemail.

I suppose I can talk about the way the game is treating choices. I touched on that a little earlier, with the game tracking things I didn’t even realise were choices, but the ability to rewind time doesn’t actually help much with the big choices. 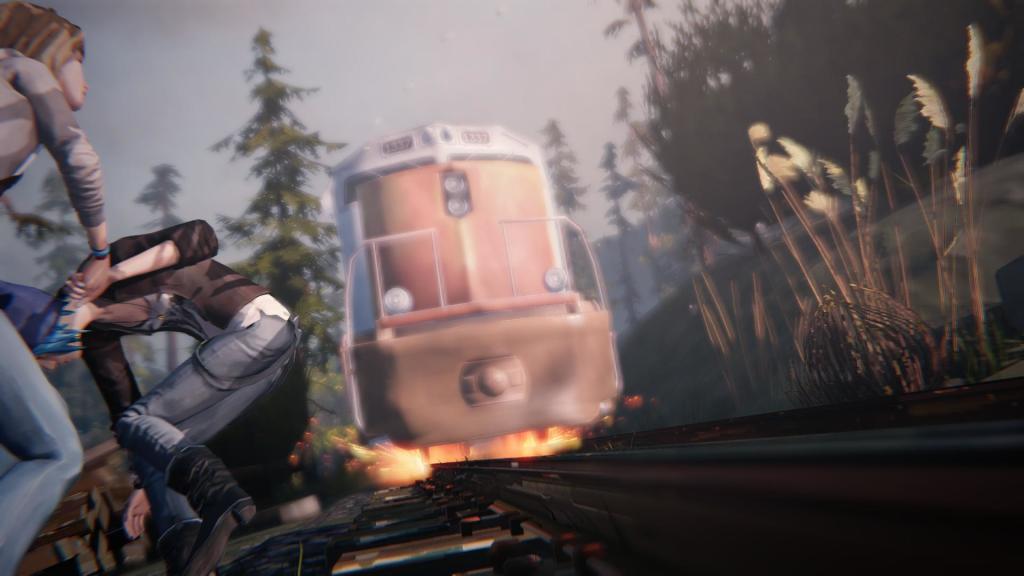 There are a few moments of tense excitement too, mind.

It lets you see the immediate consequences of your actions and hear some of Max’s musings on what this might mean, buuut most of the consequences are of the far-distant The Witcher variety, and unfortunately you can’t rewind back to episode one to order a different breakfast if it turns out that your choice of eggs will end the world. In that sense, the time travel remains a little bit of a gimmick, largely used for the aforementioned memory tests, or to give you a chance to rethink a rash decision.

This might actually have an impact on the story, though. We’re starting to see more and more of the effects that rewriting the laws of time and space is having on Max, with nosebleeds and passing out being a lot more common this time around than before. I’m hopeful that the price and limits of Max’s powers really is a plot thread that’s going to be explored, rather than a (necessary and understandable) gameplay limitation. 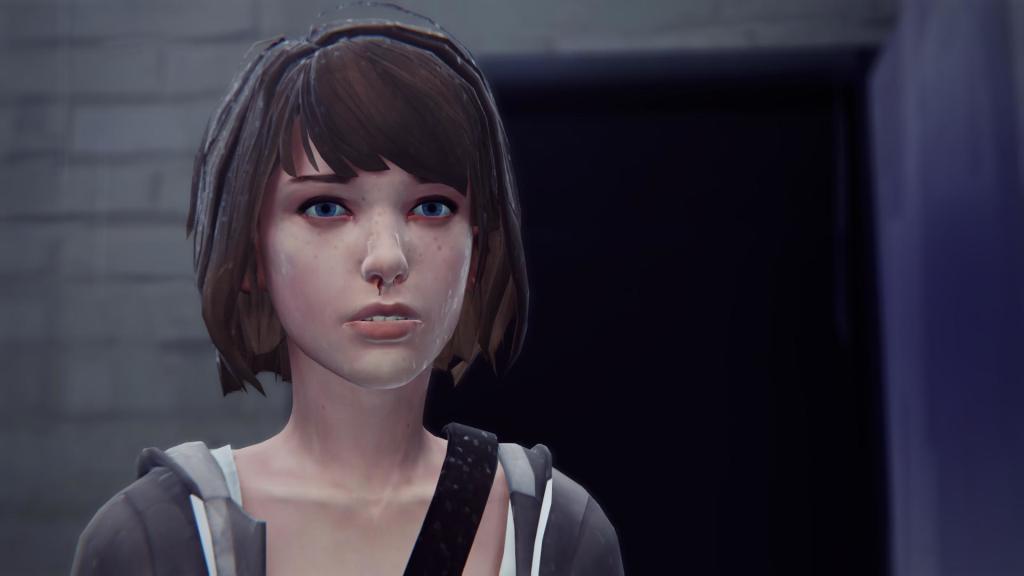 General life lesson: if your nose starts bleeding when you do something, then it might be bad for your health.

I actually believe it will be, though. We’re two episodes in and Life is Strange has yet to disappoint on its plot, characters, or evolving story arc; it’s exploring interesting areas and using the time-travel weirdness without relying on it. I normally try to err on the side of cynicism, but I’m finding it very hard to do that here: I actually have faith in Dontnod to build this out properly and craft something genuinely special. This is pretty new for me.

If you didn’t like the art or the indie-ness of the first episode, then you’re still not going to like this. I wish the time-wasting bottle hunt didn’t exist and that there was maybe something more original than a couple of memory tests, in terms of actual in-game applications of the time travel, bizarrely entertaining as those bits are. But those aside, I really appreciate Life is Strange, and I’m eager to unravel more of the mystery.

Bundle Stars’ latest bundle is all about the big games

Broken Age Act Two coming at the end of April