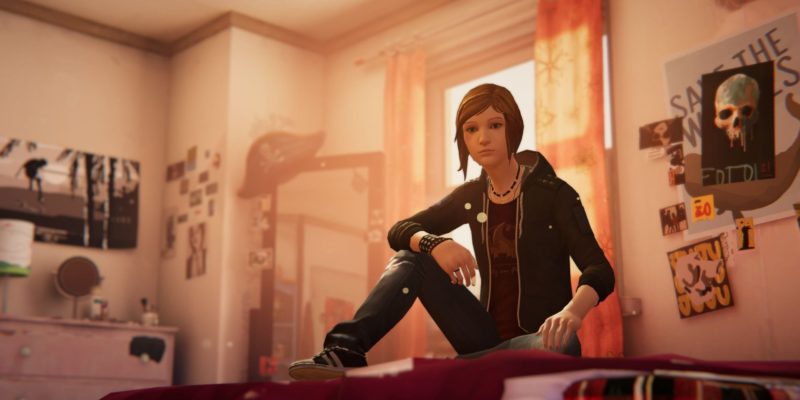 I have been… let’s be polite and say I’ve been skeptical about Life is Strange: Before the Storm. Not because I didn’t think it would be any good, necessarily, but because there were alarm bells ringing in my head as to whether it was even necessary. Life is Strange was a superb experience that felt complete, and with such special experiences, attempting to bolt something else on is a very risky proposition. Throw in that Dontnod aren’t taking the reins for this, and the possibility for something that didn’t live up to its exquisite predecessor – and could actually detract from it – felt very real.

I’m quite happy to say that, right now, it’s more than a little bit good. While the jury’s still out on whether or not Before the Storm is even remotely necessary, it feels like Life is Strange, and that’s a pretty good sign by itself.

The usual “Episode 1 of X” guidelines apply, though. This is a third of the complete product (a quarter, if we count the bonus Max episode) and there’s plenty of time for things to go off the rails, or for the plot to not actually go anywhere interesting, or a myriad other things. And, yes, I can already fault it in a few areas. But we’ll get to that. 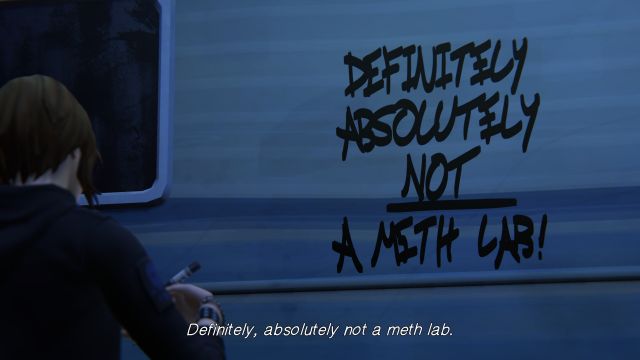 Chloe doesn’t take photographs of things, so her “collection” is instead her writing or drawing graffiti on things. It’s a nice little collection mechanic that fits her character, and her omnipresent pen also doubles as an objective reminder – she jots down your current objective on her hand.

As the name implies, Before the Storm is set prior to the events of Life is Strange. Chloe Price’s father has died. She’s smoking pot and skipping school regularly. Her mother has started dating a moustachioed army veteran. Her best friend (hello, Max) has buggered off to Seattle and isn’t responding to any of her messages. She is – in short – feeling alone, angry, and rudderless.

If you didn’t like Chloe then Before the Storm probably isn’t going to change those opinions much. Playing as her offers more of an insight into her mind and makes her a more relatable character, but she’s still the same reckless snark-machine as before.

While we’re on the topic of being “the same”, I’ll note that Rhianna DeVries has done a fine job as a replacement Chloe, to the extent that I found the change barely noticeable (and the same goes for a few other returning characters whose voices have changed due to the SAG-AFTRA strike). I haven’t really played Life is Strange since completing it, so more recent players may find it more jarring, but it’s still an eyebrow-raising performance by virtue of not being eyebrow-raising. The worst I can say is that a few lines of dialogue have a slightly odd emphasis on words and some of the lines lack a teensy bit of nuance, but that’s incredibly nit-picky. 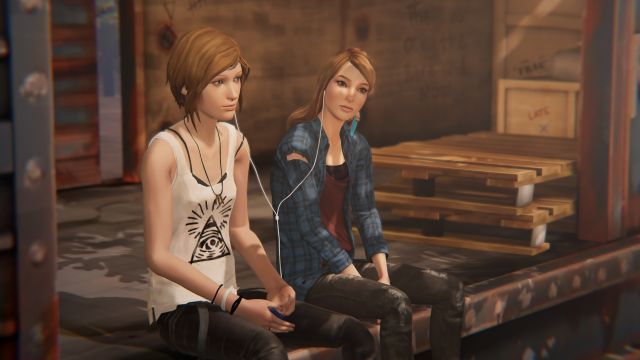 I’m sure she’ll be as divisive a character as Chloe is, but I do really like Rachel Amber.

And now to really pick some nits.

Chloe lacks Max’s supernatural time-rewinding powers, and the replacement mechanic – her ability to talk shit to people – is… not amazing? It’s fine, but while the time-bending was a crucial part of the plot and the evolution of the Life is Strange characters, Chloe’s ability to talk her way out of situations by playing something vaguely akin to Monkey Island‘s insult swordfighting feels a lot more gimmicky. A person says something, and you respond with a comeback that uses one of their words or the theme of their phrase to slam it back in their face. But, for the most part, these are just little side conversations rather than feeling like anything of earthshaking import. Here’s hoping that future episodes utilise these a bit better.

The other complaint I have is that there isn’t really a “hook.” Life is Strange has the disappearance of Rachel Amber and the time-rewinding as central elements pulling the plot forward. The Wolf Among Us has a murder mystery. Before the Storm has… uh, Chloe meeting Rachel. It’s not that it isn’t interesting and fun to see, but there’s nothing latching onto my brain and going “Ooh, I wonder how this is going to turn out?” Which is, partly, the curse of the prequel, and the same goes for some of the choices. I can have Chloe try to be nice to David, but I already know that they’re not going to have the best relationship by the time Life is Strange rolls around, so… 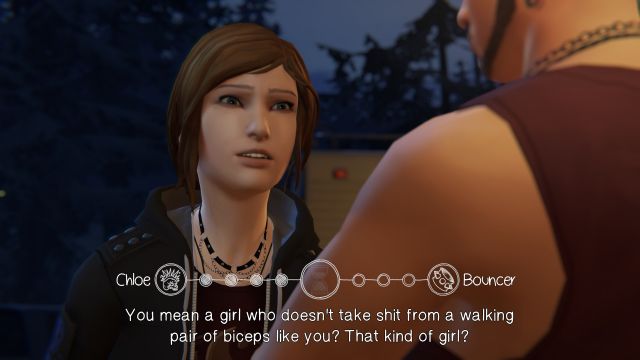 Picking the correct option when talking back to someone fills up one of the dots. Get to the middle first and you successfully talked shit to them. This was a response to something like “A girl like you…”

But! But but! I said that this was more than a little bit good, and I meant it. No, the back-talk system isn’t great, and I’m still waiting for a plot to materialise, but I’m loving seeing the burgeoning womance (or possibly romance) between Chloe and Rachel, which thus far has been handled superbly. Rachel herself is a really intriguing character, too; a popular honour student who nonetheless turns up at shady gigs and talks Chloe into ditching school. She’s nothing like Max, but she works wonderfully as a foil and/or accomplice for Chloe nonetheless. It’s not hard to see why they’re going to wind up becoming BFFs, and why Chloe’s going to be so devastated by her eventual disappearance.

There are also a few absolutely shining moments. One early segment lets you partake in a purely conversation-based pen-and-paper RPG, and the dialogue here sparkles. Later on – and I’m being careful here to avoid spoilers – there’s a really excellent use of the interface to convey emotion. And while some of the emotive moments of this episode feel a teensy bit forced, it still did a really good job of making me actually feel things. There was one decision I had to really think about, despite suspecting it wasn’t going to have a huge impact, and another that absolutely had my heart in my mouth. Considering I know the rough outline of what’s going to happen in these relationships, that’s a hell of an accomplishment. 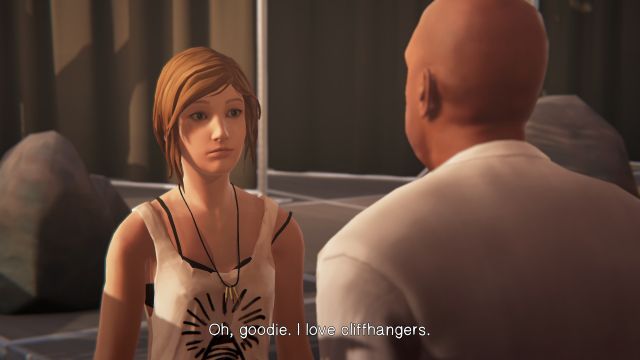 But there isn’t really much of one here, for better or worse.

A lot of this, I think, comes down to the complexity that’s been added to Chloe’s character. Some of it’s a tiny bit weird in retrospect, and she maybe dips a little too far into the tar-black pool of teenage angst; but her roiling emotions, her confusion, her longing for someone to trust while simultaneously pushing everyone away… they’re all very understandable traits.

It occurs to me that a fair few of my “but”s were things I said about the original Life is Strange. Back when the first episode of that came out, I’m almost certain I noted that the time-rewinding felt like a gimmick and needed to be better utilised, and so on. Considering how well everything turned out there, I’m willing to give Deck Nine the benefit of the doubt here, because in atmosphere and music and dialogue they’ve captured an awful lot of what Dontnod did to make Life is Strange a heart-warming, heart-breaking, melancholy experience.

As noted, the jury is still out, because blah blah episode one blah blah, and I don’t know if I’d recommend it without seeing more of what the overarching plot is going to be – assuming there’s going to be something more than “how Chloe and Rachel became friends.” But let’s face it: if you played Life is Strange then you’ve probably bought this already, and if you haven’t, then you should play that first. If you’re one of the few Life is Strange players who haven’t picked this up yet, I’d definitely recommend waiting until we see how the rest of it turns out. What’s here is good and fine, but this episode feels like a prequel episode (no pun intended) that’s building up to whatever’s going to happen.

Life is Strange: Before the Storm Episode 1

I've got plenty of minor quibbles, but this is still an impressively solid start to a product that has an awfully special predecessor to live up to. I'm just hoping that this doesn't end up feeling like a prequel that nobody really needed.

Win a copy of Tribes-like shooter Midair from Archetype Studios

By Andrew Farrell5 mins ago
Reviews

By A.K Rahming1 hour ago
Reviews